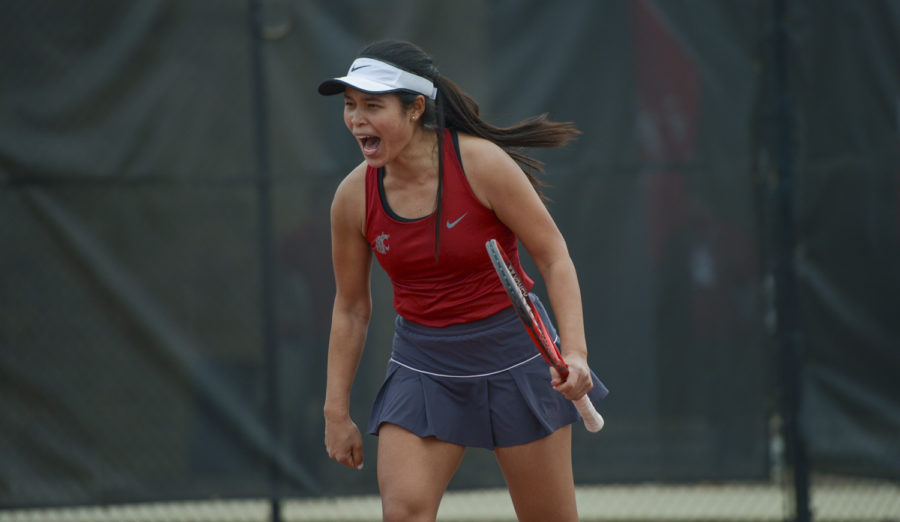 The WSU tennis team finished up their season at the Pac-12 Championships when they lost to the UCLA Bruins 4-0 on Saturday.

The Cougars opened the championships with a 4-0 victory against Colorado which advanced them to the quarterfinals against UCLA.

WSU ends the season with a 14-16 overall record and a 4-6 conference record. WSU entered the tournament ranked No. 8 in the Pac-12.

The victory against No. 9 Colorado was a revenge game for the Cougars, as earlier in the season Colorado defeated WSU 4-3. Colorado ended their season after the loss and fell to 9-12 overall and 3-7 in conference play.

WSU’s No. 78 Michaela Bayerlova and Yang Lee were ahead 5-4 in their match against Ky Ecton and Maria Campos when their match was stopped due to the doubles point being decided.

In singles, WSU was just as dominant. The Cougars won their first game when Ates defeated Ecton in a two-game set 6-3, 6-3.  WSU grabbed another victory when Jittakoat defeated Eggink 6-3, 6-4. The Cougars closed out the match with another win as Sato defeated Campos 7-5, 6-2.

Bayerlova was leading against Dervian 6-4, 5-3 and Savanna Ly-Nguyen was leading 7-6 (5), 1-4 against Balzert when the remaining matches were stopped. Kumhom was trailing Forster 6-3, 5-5 when the match was stopped.

Ates’ win was her 106 win all-time, which ranks third all-time in program history.  Ates is the current leader in combined singles and doubles victories for the Cougars with 197 wins.

In their quarterfinal match against No. 1 UCLA, the Cougars came up short with a 4-0 loss to the Bruins. UCLA entered the tournament ranked No. 5 nationally and improved to 18-3 on the season and 10-0 in conference play.

UCLA started doubles with a dominant 6-0 win when Vivian Wolff and Annette Goulak defeated Bayerlova and Lee. WSU was closer to victory in the second doubles match but still came up short when Jittakoat and Kumhom fell to Elysia Bolton and Vanessa Ong 6-4, securing the doubles point for UCLA.

WSU’s Ates and Sato were tied 4-4 with Abbey Forbes and Jada Hart when the match was stopped.

UCLA started off singles with a win as Sasha Vagramov defeated Jittakoat 6-2, 6-2.  The Bruins continued to dominate as Wolff defeated Ly-Nguyen 6-4, 6-0 and then clinched the match with a third victory when Bolton defeated Kumhom 6-2, 6-2.

UCLA was leading in the remaining three matches when the game was stopped. Bayerlova was trailing Forbes 6-2, 3-2 and Sato was trailing 6-4, 4-0 to Hart. Ates was down 6-3 in the first game but was tied 3-3 in the second game when the match was stopped.

With the victory, UCLA advanced to play No. 4 Arizona State in the semifinals. The victory against WSU was UCLA’s tenth victory in a row.

The Cougar tennis team will head into the offseason with a very familiar team, as the only player leaving is the fifth-year Ates.