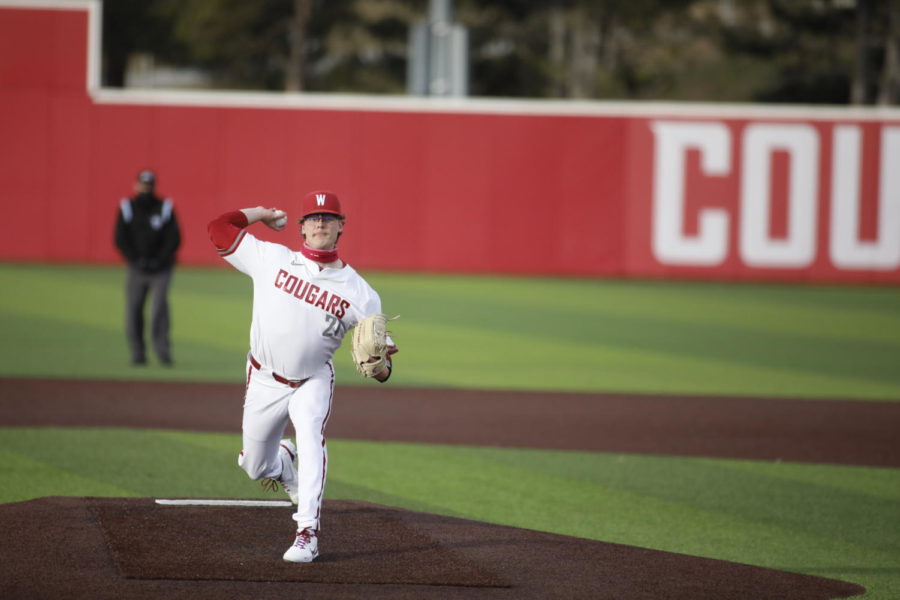 Junior pitcher Zane Mills throws the ball during the game against Seattle U on March 5 at Bailey-Brayton Field.

WSU baseball clinched a three-game series Sunday night against the California Golden Bears after losing 3-2 on Friday, then winning 4-2 on Saturday and 4-3 on Sunday in Berkeley, California.

The Cougars (19-15, 7-11) won their second Pac-12 series on the season against Cal as they head into the latter half of the regular season.

WSU saw its one-run lead disappear on Friday when they were leading 2-1 heading into the bottom of the eighth inning. Cal was able to score two runs to take a 3-2 lead and win the game.

In that game, junior right-handed pitcher Brandon White went 5.1 innings strong, giving up six hits on one run scored, three walks and striking out six batters. The loss is credited to senior left-handed pitcher Michael Newstrom, who gave up the two runs to give Cal the lead and win.

Saturday, however, saw junior right-handed pitcher Zane Mills throw his first complete game of his career, grabbing the win and striking out 10 batters in the process. Mills also allowed six hits and two earned runs in the game, as well as a couple more walks to get through the lineup.

This was also the first complete game for a WSU pitcher since 2018 when former pitcher Scotty Sunitsch threw a no-hitter at Oregon.

Head coach Brian Green said he was very impressed with Mills’ game and thought he looked confident up on the mound.

“In the ninth inning, he took over,” Green said. “He was phenomenal, and the team needed it, he really took the game over so congrats to Zane.”

Junior infielder Kodie Kolden, Manzardo and senior infielder Jack Smith all collected three hits in Saturday’s contest with Manzardo driving in two runs, Kolden driving in one run and Smith scoring twice to give the Cougars their first win in Berkeley since 2015.

Sunday’s game was scheduled for noon, but with impending inclement weather, the game was pushed back to 6:05 p.m. for the first pitch from Evans Diamond.

In the close win, another two-hit day from Kolden and an early two-run double from junior outfielder Jacob McKeon gave the Cougars an early 3-0 lead and prove to be just enough to defeat Cal.

Junior right-handed pitcher Dakota Hawkins picked up his third win of the season, going five innings, giving up three hits on three runs scored. Hawkins also did not allow a walk and struck out five batters, and the bullpen only allowed one hit through four innings of baseball.

The Cougars continue their road trip as they head to Spokane to face Gonzaga in a single game for 6 p.m. Tuesday. Lineups and starting pitchers will be announced one hour before game start.