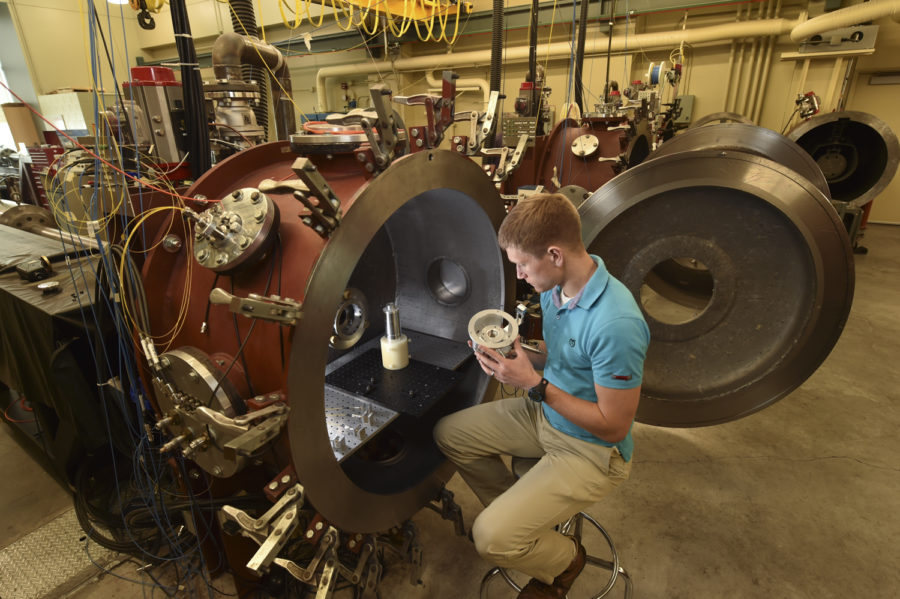 Travis Volz, who researched this during his doctoral work at WSU, experiments with diamonds in the Institute for Shock Physics’ Impact Laboratory.

Diamonds are the strongest material on Earth, but an even stronger type of diamond has been created in the lab. Hexagonal diamonds are stiffer and stronger than the typical cubic diamonds used for jewelry, according to WSU researchers.

Both graphite and diamonds are made of carbon, and this allows graphite to be converted to diamond under extreme compression, said Yogendra Gupta, professor at the WSU Institute for Shock Physics and co-author in the study.

To convert the graphite into diamond, a small graphite disk was accelerated through a two-stage gas gun, said lead author Travis Volz, who worked on the research during his doctoral work at WSU. Volz is now a researcher at the Lawrence Livermore National Laboratory.

Gunpowder is ignited in a barrel in the gas gun, he said. The explosion propels a plastic piston that compresses the gas, breaking a metal diaphragm which releases the gas into another barrel where the graphite sample is placed.

The released gas projects the graphite through another chamber at a speed of 15,000 mph. The high-speed impact and high pressures produce shockwaves that transform the graphite into a hexagonal diamond, Volz said.

This transformation happens in a time span of less than a nanosecond, he said. It takes less than one-billionth of a second for the graphite disk to be propelled and transformed into a tiny hexagonal diamond, but the hexagonal diamond exists only briefly.

The impact of the graphite disk traveling at such a high speed destroys the diamond and turns it into dust, Volz said. As a result, the diamond does not exist permanently.

The stiffness of the diamond was measured during the experiment by using the speed of sound, Gupta said. When an object is stiffer, it has a faster sound speed. If the sound speed of an object is measured, researchers can determine that object’s stiffness based on how fast sound travels through it.

Stiffness determines the strength and the hardness of a material with stiffer materials, like hexagonal diamonds, being stronger, Volz said.

“[Stiffness] essentially describes the extent to which a material can resist deformation under an applied force,” he said.

As far as researchers have determined, diamonds are the strongest material, Gupta said. What makes diamonds so strong is the unique chemical bonding between their carbon atoms.

It is unclear if the diamond is recoverable for the long term after the gas gun experiment, Volz said.

“With the really really high velocities we’re using, it makes it pretty difficult. And so, I don’t know if it’s possible [to recover them] using the technique that we used to create them. But there are other techniques that are under investigation which may be able to produce hexagonal diamond,” he said.

Hexagonal diamonds could have possible practical applications if they were able to be made in high enough quantities, Volz said. It could be useful for industrial purposes as an abrasive because it is such a hard material that it can be used for polishing and machining.

“Part of the novelty of cubic diamonds is how hard they are and how brilliant they look and how supposedly they last forever,” he said. “If you were able to make hexagonal diamond and it had similar properties except it was even harder, there might be an even larger demand for this even rarer type of gem.”