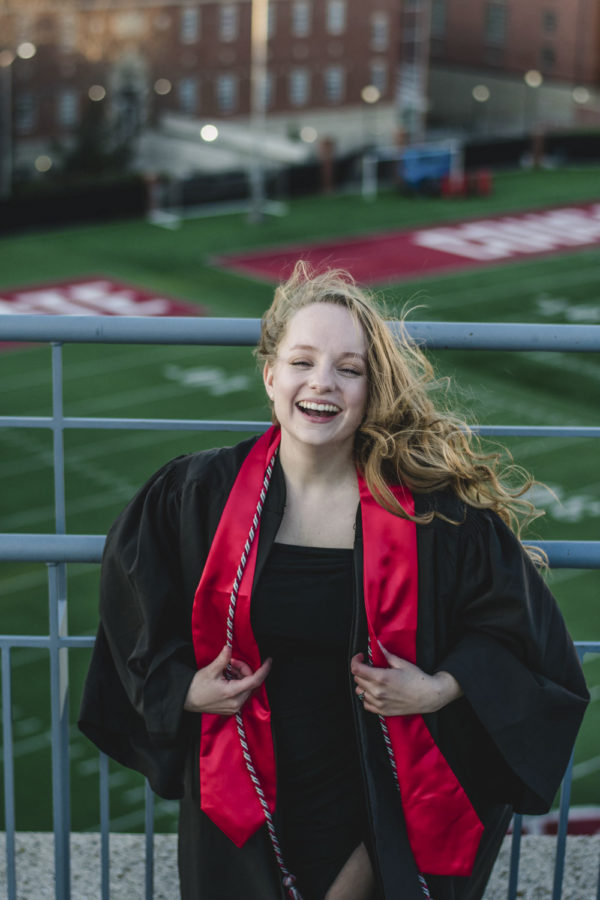 Discovering her love for genetics and cell biology, Miller decided to attend WSU to earn her degree.

Darby Miller, senior genetics and cell biology major and Spanish minor, learned the hard way to live in the moment and be a yes person, rather than waiting until your senior year to venture out.

Miller first came to WSU following in the footsteps of her mother, who graduated in 2000 with a degree in mechanical engineering.

“She’s an amazing woman,” Miller said. “I hope that one day I can be as smart and humble, everything that she is. She is my biggest supporter, my biggest hero — just such an amazing person.”

Miller said her most rewarding experience was having her loved ones see everything she has accomplished and sharing that with them. She remembered her proud mother being able to come and watch her receive several scholarships she won.

When looking at colleges, Miller considered going to WSU Tri-Cities but wanted a more diverse option for degrees and classes. The Tri-Cities campus only offered biology and she knew she wanted something more closely related to genetics.

“I was interested in genetics in high school,” Miller said. “I don’t think I fully understood what it was going to be like when I chose it. I knew I didn’t want to do just biology. I knew I wanted to go to medical school. I was thinking I should choose something in the sciences.”

Miller had an inkling that she liked genetics, so she stuck with it. As she went through school, she said it became more apparent that she made the right choice.

This does not mean Miller never had a hard time in her degree. She had to sacrifice other experiences to study, and she encountered classes where she questioned if she was doing what she was meant to, such as organic chemistry II.

Her pre-medical adviser, Lori Eiland, gave her some meaningful encouragement that she still holds with her.

“I went to my pre-med adviser and said ‘Maybe this isn’t for me,’” Miller said. “’Classes are getting harder, and I am just not measuring up.’ Maybe it isn’t your cup of tea, but you shouldn’t give up. You’re going to fail, but as long as you move forward and learn from it, then you’ll succeed.”

Her adviser said that it was just one class, one semester, Miller said.

Miller said it was important to be courageous and do the scary thing. Even when she didn’t think she would do well on a test, she showed up anyway. She had to hold her own not only in the classroom but also when joining clubs and volunteering because there are so many people who were amazing and smart.

“Someone has to win it, so why can’t it be me?” Miller said.

This experience gave her more confidence and she is thankful for all the people she got to meet along the way, many who are graduating with her now.

“I try to be supportive of everyone,” Miller said. “A lot of my peers are wanting to go to medical school or doing all these different things and I love hearing about that, and I enjoy being supportive of all of my friends and peers.

They all want to do different things and there’s a niche for all of them. Everyone’s trying really hard, and they deserve to succeed in what they’re doing, Miller said.

Unfortunately, the senior year Miller had is not the one she had planned. Many things were postponed, canceled or downright impossible to do, including a Hearts in Motion trip to Guatemala originally scheduled for spring break of 2020.

Then COVID-19 started and none of her plans happened. She thinks now she has learned that if you want to do it, you should do it now. Stuff happens in your life and you never expect it, Miller said.

Miller now looks forward as she prepares to attend the Elson S. Floyd College of Medicine in Spokane, Washington.

“You go through all this college and you just want to graduate and start your life, and then you’re here and you have some tough decisions to make with where you are going to live and what you are going to do,” Miller said.

She is excited to be able to work in the future. She said success is waking up every day with motivation and being happy and content while being surrounded by those she loves.