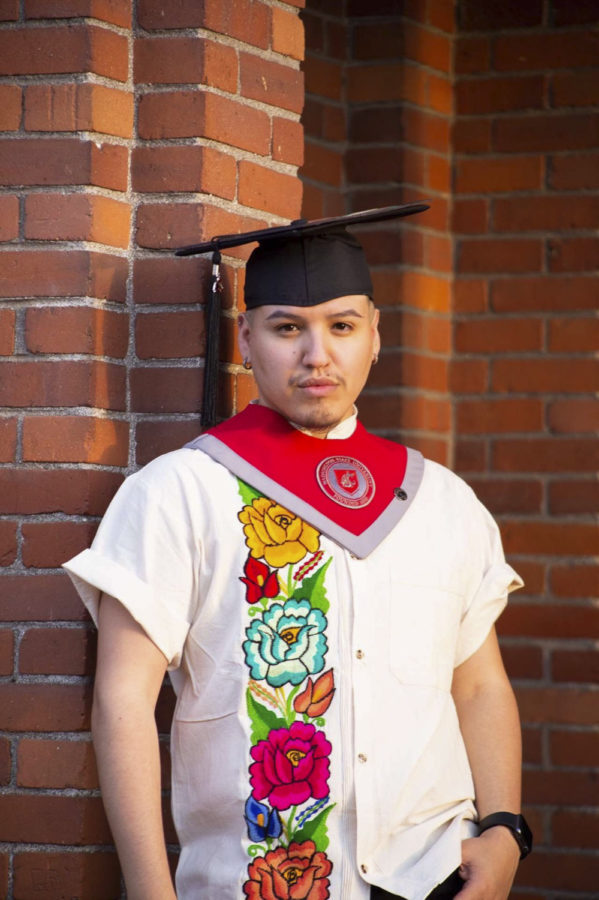 Goal in life is to open up his own boutique and share his designs with the world.

Throughout his contemporary life, Hugo Barragan dreamt of opening his own boutique shop. It’s a dream of creating clothing accessible to all individuals and disabilities, hoping to help people feel as confident as possible.

As a first-generation college student, Barragan received a college-bound scholarship in middle school. He kept good grades and attendance to receive the scholarship for college. After graduating high school, Barragan chose his dream school and attended WSU, entering the path to an Apparel, Merchandising, Design, and Textiles major.

Joining Omega Delta Phi Fraternity once he arrived, Barragan participated his freshman year before joining the fraternity’s leadership team. Barragan took on the roles of public relations officer, recruitment and stroll chair, and vice president during his time with the fraternity. He said the leadership skills he gained were beneficial, and he was able to create long-lasting friendships and connections.

Barragan was also a student mentor for Multicultural Student Services, a place he often found himself when he was missing home or needed a little extra support. It quickly became his favorite part of campus.

“It feels like I am home,” Barragan said, “Like this is my space, and I could sit here on the fourth floor of the CUB and get the work done that I need to.”

As a student mentor, he has mentored around 80-90 students throughout the three years he’s been mentoring and helped them transition into college life for their freshman year.

Barragan was also a leader for Children of Aztlan Sharing Higher Education (CASHE) an event for high school students to get them interested in college. He is happy to help students understand they can make it to college and pursue education. Throughout the whole weekend for CASHE, leaders host events and tell stories about how they came to college and the possibilities for the students.

For Barragan, his possibilities and excitement bloomed as an AMDT major. Barragan participated in the 37th and 38th annual WSU fashion show and received the Dean’s Choice Award this year.

As the winner of the 38th annual fashion show’s Dean’s Choice Award, Barragan continues to pour his heart and soul into his work. Referencing activism, social movements and his own culture, Barragan crafted his Mil Novecientos Ochenta Y Ocho (1998) Collection.

The pride and joy of his collection is the men’s blazer outfit.

“The look that I created is a blazer with the one sleeve,” Barragan said, “I purposely ripped it. And on judging day for the fashion show, one of the judges asked me this question, ‘Why did you do it like that? With one sleeve gone?’”

Barragan said he puts his own experiences as an undocumented student into his designs. He does this by interviewing his models.

“They told me their personal stories as DACA recipients, and then I grabbed those ideas, mixed them with mine and then came up with the outfits for each person,” Barragan said.

Listening to the model’s story gave Barragan the courage to rip off the sleeve.

“I think it was important to highlight how strong of a person he is and all the struggles that he went through,” Barragan said.

By ripping off one side of the jacket, Barragan was able to show how strong the model is, both physically and symbolically.

“A small detail that I added was the butterfly which contains the year 1998 because that’s the name of the collection,” Barragan said, “Butterflies migrate just like immigrant people. We migrate from place to place, and we use butterflies to symbolize that, so I wanted to make sure to put it in that piece.”

Barragan wanted to make sure his idea was bold and straight to the point. He wanted to let people know he is unapologetic for his work and for being undocumented. He felt like his work came out and displayed how he wanted it.

In the future, Barragan hopes to continue creating clothing that tells a story and is accessible to all individuals, especially those who are disabled.

“I wanna research how everyone can feel comfortable in their clothing,” he said.

Following graduation, Barragan will be taking a gap year in San Francisco to work and recharge after finishing his bachelor’s degree. Barragan’s family and dreams are his main inspirations for entering graduate school, which will hopefully be at WSU.

Because he is a first-generation student and is so close with his family, he is inspired by them to continue. He said he hopes he can help pave the way for the younger members of his family to go to university.

“I want to use my fashion designs to either advocate for political and social issues or just make clothing that is beneficial to someone and will help that person feel either comfortable, beautiful or empowered,” Barragan said. “The ultimate goal is to open up my own shop and name it Barragan Boutique! That’s the dream!”