‘Everyone’s always looked up to her’

Fifth-year tennis legend, all-time wins leader at WSU Melisa Ates will be graduating school in May 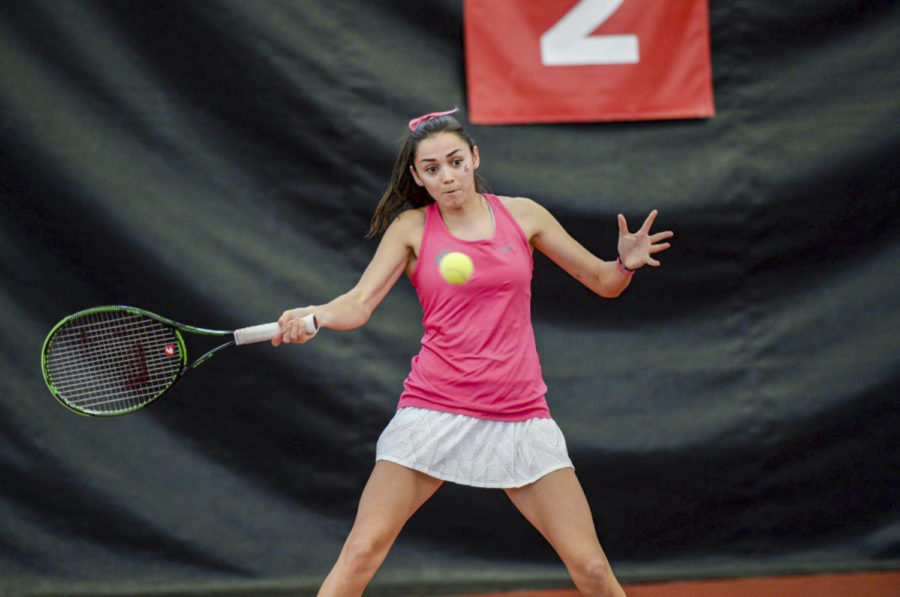 Fifth-year senior Melisa Ates will finish her career as a Cougar with 197 total wins and 106 singles wins.

The Turkish star is one of the most accomplished tennis players in WSU history. She ended her WSU career with 197 combined singles and doubles wins, which is the best in WSU program history.

“She kind of has this calming effect. She’s very consistent,” head coach Lisa Hart said. “You always know what you’re going to get with her.”

It’s not just the head coach who recognized the effect Ates’ personality has on the entire team. Teammate Maddie Egan, sophomore from Puyallup, Washington, agrees that Melisa’s demeanor helps everyone around her.

“She’s always a positive and happy light on our team,” Egan said. “It’s always just a very contagious energy. She brings such a positive energy.”

Ates is an international student-athlete from Antalya, Turkey. She started playing tennis when she was 4 years old because she has a strong family background in the sport, as both her dad and her brother were players on the national team in her native country.

“I was just pretty much jealous of him,” Ates said. “I just wanted to be like [my brother] so I trained a lot with my dad,” Ates said.

Ates may have started playing tennis because of her family’s tennis talent, but she evolved into someone who is equally as skilled. She represented Turkey’s national team as well, and she reached a high of No. 13 on Turkey’s national rankings and No. 3 in age-group rankings.

Ates said playing tennis in college is a far different experience than playing in Turkey.

“When you come here you play for something way bigger than yourself,” Ates said. “You have a team. The only time I felt anything similar was when I played for the national team for Turkey.”

Ates made an immediate impact right when she put on the crimson and gray. As a freshman during the 2016-2017 season, her 22 singles wins and 43 combined victories were the best on the team, according to the WSU athletics website.

Aside from her domination on the court, her friendly personality was also apparent when she first came to WSU, Hart said.

“I think personality-wise, she’s always had that easy-going, bubbly, positive personality since the day she got here,” Hart said.

The team captain hasn’t let up since that impressive first year. Not only did she end her career with the most combined wins of all-time, but she is also 3rd all-time on the singles wins list with 106 career singles wins.

Ates holds the program record for doubles victories, and she competed in the NCAA tennis championships when the team was selected to play in the tournament in 2019.

“That year, we had a team that really believed in it, you know, like everyone was just bought into this one goal,” Ates said.

Despite her many tennis accolades, Ates’s accomplishments go far beyond the tennis courts.  She was selected for the 2021 President’s Award on April 20 by WSU President Kirk Schulz for demonstrating exceptional leadership and service to students.

“She has always been a leader for us, even when she was younger,” Hart said. “I think everyone’s always looked up to her.”

This season, Ates served as the senior team captain. Egan said Ates exceeded expectations in that role and has a strong personal character.

“Her personality, she is very determined,” Egan said. “She will fight for anyone that she loves, and she will fight to do the best for everyone she knows. She always just cares so much about everyone.”

Ates is pursuing a degree in computer science and will graduate in May 2021. She plans to either get a job or to go to graduate school.

Ates has been on the Presidential Honor Roll and is known to go above and beyond in the classroom. Egan said Ates always stays in communication with her professors, does her work on time and goes to study groups. Hart said she has never had to have a conversation with Ates about academics or time management.

Ates has also been active in the Pullman community and has participated in more than 100 hours of community service as a student-athlete, according to the WSU athletics website.

“She’s never missed a match; I don’t think she’s ever missed a practice,” Hart said. “She just has always kind of had her stuff together on and off the court.”

Ates said the positive environment at WSU — including the team and the coaches — had a huge impact on her success.  She said the team doesn’t have any drama and that they bring high energy to practice.

Although Ates credits those around her for much of her success, a lot of that success comes from somewhere internal because she is always trying to lead by example.

Even though Ates has finished her athletic career as a Cougar, her legacy goes far beyond the court and will be remembered by many Cougars for years to follow.