Relente will move to Tacoma this summer for internship with Tacoma News Tribune; first recipient of the Evergreen Fund of Christine and Glen Dorsey 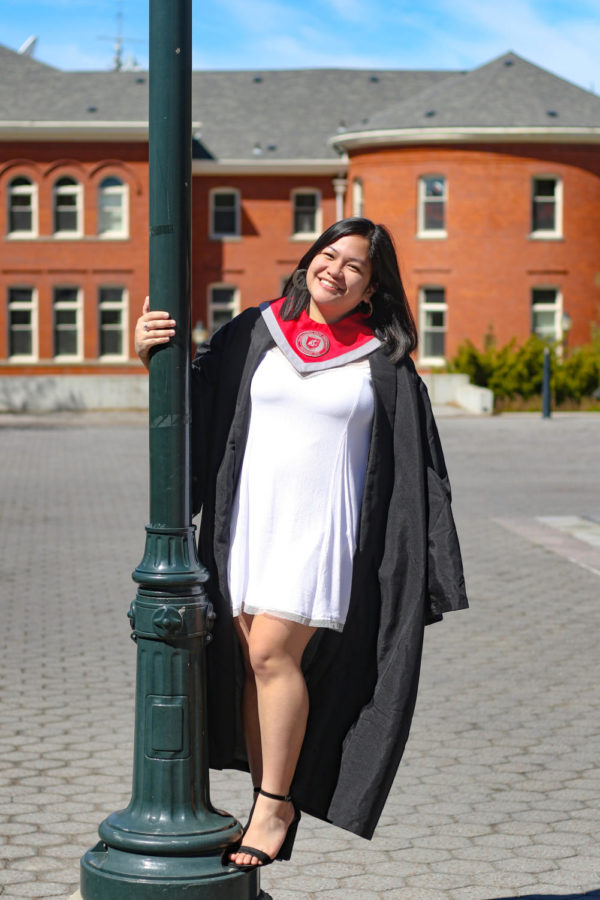 Angelica Relente, former Evergreen editor-in-chief, is a legislative intern for the Columbia Basin Herald. After graduating in May, Relente will be moving to Tacoma for a summer internship with The Tacoma News Tribune.

Angelica Relente remembers walking into a conference in Seattle, Washington, along with 10 other brown students from Waipahu High School in Hawaii. The people and booths all blur together, but she remembers knowing, in that moment, she was meant to be a journalist, even if she did not know why at the time.

Relente’s epiphany was further cemented by her high school journalism teacher Daryn Kakazu, who was a father figure to Relente. She said she believed him when he told her he saw a bright future in her.

Hawaii is a melting hot pot of diverse cultures, so diversity is not something Relente said she had to think about. But that changed when she entered Washington State University as a multimedia journalism major; Relente said she was caught off guard by the lack of diversity.

“Maybe this is what journalism is, right?” she said. “Just a bunch of white people talking — writing.”

“She’s going to transform things,” said Lisa Waananen Jones, Relente’s teacher and assistant professor for the WSU Edward R. Murrow College of Communication. “She’s going to improve news coverage in whatever community she is in.”

Relente was born in the Philippines. She would spend her days playing badminton, flying a kite made of string and a plastic bag, and going to a private Catholic school that she hated.

She learned how to stand up for herself at an early age. She was bullied by a boy with a bowl cut on her bus when she was in elementary school. One day, Relente said she could not stand it anymore, and with all the mighty gusto she could muster, she whacked him in the face with her pink Hello Kitty lunchbox.

When Relente was 8 years old, her mom told her they were moving to Hawaii. Before leaving the Philippines, Relente and her family went backpacking across the country to say goodbye to distant relatives she had never known. On the plane to Hawaii, Relente said she was terrified, gripping her mom tightly for the beginning of the flight.

She said assimilating to American culture was fairly easy for her because she was so young. She distinctly remembers having Cocoa Puffs for the first time and promptly finishing the entire bag. She also remembers being placed in English language learners classes while entering elementary school in Hawaii.

Ten years and one language later, Relente was a freshman about to be interviewed for a position at The Daily Evergreen.

Dressed in black slacks, a blazer and a white long sleeve that she spent hours agonizing over, Relente walked into the newsroom located in the basement of Murrow Hall and was intimidated.

“All I saw were white people,” she said.

Relente’s nerves lessened slightly when the news editor walked in wearing a Star Wars t-shirt and a scarf. Relente said she kept rubbing her hands together but she slowly stopped during the interview as her nerves lessened, taking her blazer off because of the heat and complimenting the editor’s shirt.

Relente was hired as a news reporter and her first stories were difficult. Editing stories with her editor took a while, and she said she had no idea what she was doing with some stories, like when she covered an on-deadline event about taxes.

“If something is hard, I don’t see why you should give up,” she said. “It’s not an option for me, I’m not going to let this little thing stop me … I wasn’t expecting it to be all rainbows and sunshine.”

In her sophomore year, Relente said she was scrolling on Twitter at 1 a.m. when she saw a video depicting members of a WSU fraternity appropriating Pacific Islander culture. In the video, Phi Gamma Delta fraternity members were chanting while dressed in grass skirts. The video quickly spread and Relente jumped on the story, attending a town hall hosted by The Office of Multicultural Student Services. She interviewed various students and student groups who condemned the fraternity’s action in the video.

It was the longest piece she had written at the time and it was due that same day. Relente said it was a lot of work condensed into a small time frame, but it was infinitely rewarding when someone told her they were happy she was the one to cover the story because she understood the weight of cultural appropriation.

In the same year, Relente met Daisy Zavala, a Chicana journalist who would unabashedly share her passion for diverse communities.

“She was one of the few reasons why I even made myself go to the newsroom,” Zavala said. “She would just joke all the time, take Snapchat videos of me — shoot me with the Nerf gun in the video.”

Zavala, a 22-year-old senior multimedia journalism and political science double major, actively challenges journalists’ belief in objectivity. Objectivity is a common excuse used to gatekeep journalists of color from the industry, she said, by keeping journalists of color away from covering stories about communities of color or by sequestering them to only covering those stories.

Speaking with Zavala led to Relente rethinking how she once viewed journalism. Relente said she realized there was a diversity problem within the industry.

Relente and Zavala began to speak to Waananen Jones who pointed them toward organizations for journalists of color.

The news industry has a diversity problem, Waananen Jones said. The problem is exacerbated by the lack of pay that makes it difficult for journalists to make a living, which pushes out journalists, often journalists of color and journalists with diverse backgrounds, who do not have other means of financial support.

Relente joined the Asian American Journalists Association where she was able to find a community of journalists just like her. This proved to her her identity matters in a newsroom, she said.

“If you have a newsroom full of just white people … the potluck won’t be as tasty,” Relente said while laughing.

Journalists of color offer different perspectives and experiences, Relente said. Newsrooms should be more proactive with hiring journalists from diverse backgrounds, she said.

Relente became news editor for The Daily Evergreen during the spring semester of her sophomore year. While in the position, Relente — once referred to as “Relentless” in a misspelling that ended up in one of the Evergreen’s print editions — said she made it a point to assign stories covering multicultural events, students and groups.

Relente continued to cover difficult stories, including pieces about misconduct by a former local radio host and within the WSU Department of Psychology.

Waananen Jones said Relente has a talent for investigative reporting because she wants to understand things thoroughly. There have been times where Waananen Jones will wake up to see a text message from Relente getting excited about something she found in public records.

Diversity and inclusion remained as Relente’s priorities when she became editor-in-chief in fall 2020.

Before Relente began her term, Zavala, who would be serving as her managing editor, took Relente home with her to Wenatchee, Washington for a Mexican fiesta. Zavala said two worlds merged together when she encouraged Relente to try Mexican street corn. She later coaxed Relente onto the dance floor when Mexican bands started playing music.

Together, Relente and Zavala made it their mission to keep, recruit and hire reporters and editors of different backgrounds, highlighting their identities in a series called “Culture Brew,” which ran weekly in the Evergreen’s Mint section, which covers stories about art and culture.

Because of Relente’s work and dedication to the Evergreen, she became the first recipient of the Evergreen Fund of Christine and Glen Dorsey. The fund was created by Jake and Katie Dorsey, and it was named after Jake Dorsey’s paternal grandparents; his grandfather was a WSU alum.

Jake and Katie Dorsey both graduated from WSU in 2005 and worked for the Evergreen while they were students.

“For me, the Evergreen is the chance to make the mistakes that will teach you the lessons you need to learn,” Jake Dorsey said.

Jake Dorsey said he did not pick Relente as the recipient was selected by staff members involved with the Evergreen and WSU Financial Services, but he was thrilled to learn she won it. He has kept up with some of Relente’s work, but he was ultimately impressed by one particular decision Relente made while serving as editor-in-chief.

After the COVID-19 pandemic began, funding for the Evergreen decreased significantly. Relente cut the paper’s print production from five days a week to once a week. The decision not only helped the newsroom follow COVID-19 safety regulations, but it ensured student wages would not be impacted.

“That is a courageous decision that I would not have wished on anyone,” Jake Dorsey said. “And she clearly did it with aplomb and with an eye toward her fellow journalists, wanting to make sure that they stay funded first and foremost.”

Relente, now 22 years old, is a legislative intern for the Columbia Basin Herald. She writes about five articles a week about state legislative proceedings. After graduating in May, Relente will be moving to Tacoma for a summer internship with The Tacoma News Tribune.

The Tacoma internship is competitive. Only two people were chosen from over 200 applicants, Relente wrote in a message.

Zavala said she has no doubt Relente will be an amazing journalist and her journalism skills will only grow as she enters the professional field.

Waananen Jones said she wants to eventually see Relente in charge of her own newsroom.

“If we could have 1,000 or even 100 Angelicas and let them be in charge of news, our news would be so much better,” Waananen Jones said.