Hopes to help people with similar experiences, travel to Washington D.C. for internship 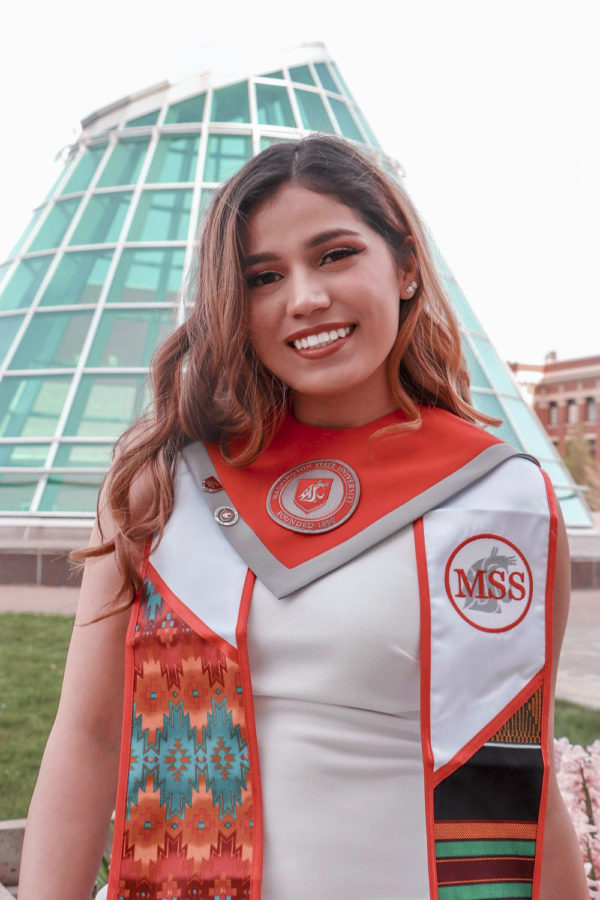 “Helping people who have been in similar shoes as me is something that I see for myself," said senior sociology major Cristalina Ramirez.

Cristalina Ramirez remembers going to the fields in East Wenatchee as a young girl and watching her siblings and mother pick seasonal fruit, whether that was pears, apples, asparagus or cherries.

As Ramirez grew older, she eventually helped her mother work by picking cherries at the bottom of the tree. She said growing up in a family of farmworkers and seeing some workers live paycheck to paycheck without understanding English instilled a desire to help others with similar experiences as her own.

Ramirez, senior sociology major with Spanish, comparative ethnic studies and at-risk youth minors, has kept that desire close to her heart throughout her undergraduate studies. Although Ramirez said she has experienced a fair share of uncertainty during college, one thing remained true  — her love for people.

“I do well working with people like myself who have come from a lower-income background, disadvantaged or people who come from a farmworker family like myself,” she said. “Helping people who have been in similar shoes as me is something that I see for myself.”

Ramirez’s desire to help others shows itself through her various leadership positions in Movimiento Estudiantil Chicano de Aztlán, ASWSU Senate and the university food pantry over the past four years.

After graduation, Ramirez said she will fly to Washington D.C. with four other interns as part of the National Migrant and Seasonal Head Start Association. They will train for 10 days and explore the city.

Ramirez said she pursued a major in sociology so she could learn more about society and how various institutions affect people’s everyday lives. She added a comparative ethnic studies minor to learn more about cultures and power differentials.

Despite intentionally selecting her majors and minors, Ramirez said she is not quite sure what she wants to do after graduation. Selecting multiple minors allowed Ramirez to broaden her skillset while leaving a lot of room for her to explore different jobs after graduation.

Ramirez said finding what her passions were during her undergraduate studies at such a young age was difficult.

“My whole undergrad has kind of been me, figuring out my path and what I’m interested in,” she said. “For some people, it’s easy to know what their passion is right away. But for me, it was kind of like, how am I supposed to have my life figured out at 17 years old?”

As a first-generation student, Ramirez said she is thankful for her high school counselors and programs like the Gaining Early Awareness and Readiness for Undergraduate Programs, a program developed to support low-income students as they navigate high school and transition to college.

During high school, Ramirez said she was not a strong student. She often did not complete her homework and received Ds and Fs on assignments. Although she struggled, Ramirez decided she wanted to attend college after learning more about higher education through GEAR UP.

Ramirez said GEAR UP helped her with applications and attending campus tours. It also taught her how to apply for Free Application for Federal Student Aid and scholarships.

“For me, my parents didn’t go to school,” she said. “They didn’t even go to elementary school, so they didn’t know anything really about higher education or high school for that matter — so I relied on big time on my school counselors.”

Ramirez’s parents immigrated from Mexico to the U.S. Even though they did not receive high levels of education, Ramirez said her mother encouraged her to attend college and is proud of all Ramirez has accomplished.

“Every parent who comes from a different country, they always kind of tell their children the same thing,” she said, “try your best to make your opportunity in this country kind of thrive … take advantage of the opportunity that you’re given.”

Throughout her time at WSU, Ramirez said she involved herself in many different programs. Her first year, she was a part of the College Assistance Migrant Program, a program that helps students transition from high school to college. She was also an ASWSU Senator.

Currently, Ramirez is an AmeriCorps member for the WSU Office of Access and Opportunity and helps ensure operations for WSU’s food pantry run smoothly. Ramirez said she anticipates the internship will run into the summer.

Ramirez served as social chair of MEChA during her junior year. She said MEChA was a second home and an organization where she formed lifelong friendships.

Anna Schilter, WSU Administrative Professional Advisory Council and Faculty Senate principal assistant, first met Ramirez in September 2019 when they both worked at the WSU Office of the Dean of Students. Schilter said everything Ramirez accomplished during her time at WSU came from a place of care.

“[Ramirez] just exudes genuine authentic care for others. That is who she is,” she said. “She set herself up for success in a way that is more meaningful than checking off items from a list.”

Schilter said she is proud of the person Ramirez has become. Witnessing various challenges Ramirez experienced during her undergraduate career is a testament to her resilience.

Reflecting on the last year, Ramirez said having three semesters of online learning was hard. Ramirez felt isolated and discouraged. Because of COVID-19, she has spent most of her time at home.

“It has broken me down,” she said while fighting off tears. “It’s definitely broken me down to the point of exhaustion and frustration. I’m feeling overwhelmed all the time.”

Graduating virtually will not have the same effect as walking across a stage and having confetti fall down, she said.

Ramirez said she lost some confidence in herself because of the pandemic and staying home all the time, which is frightening because confidence is needed to prepare for job interviews and pursue a career.

Ramirez said she is excited for the next chapter.