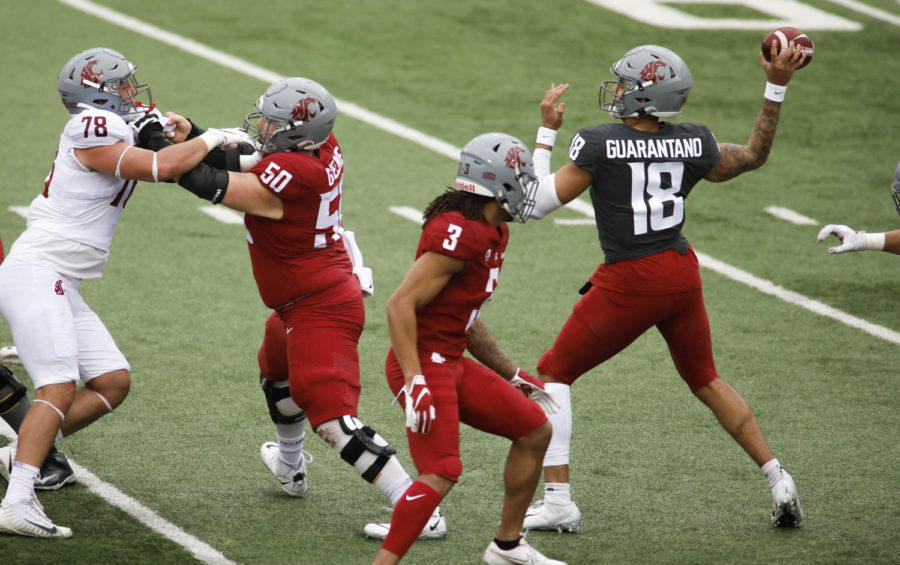 Recent transfer quarterback Jarrett Guarantano takes and throws his only snap before injury in the Crimson and Gray game last Saturday at Martin Stadium.

This fall, the Cougar football team will be returning a lot of starting talent to Gesa Field. However, there are two names that WSU fans have not heard called out over the loudspeakers in Martin Stadium that could be set for a big year in the crimson and gray.

Graduate transfer quarterback Jarrett Guarantano and redshirt sophomore receiver Donovan Ollie took two vastly different roads to get to this point in their careers. Despite this, both are in line to make contributions for the Cougars in 2021.

Guarantano has always looked at football as an important part of his life.

“It started as a dream for me,” Guarantano said. “I wanted to be everything my dad was. Growing up, that was my idol … Every single day, I think about the feeling I had as a little kid and how much joy I had. Honestly, it’s coming back to that joy that I had as a little kid as soon as I got here. Being able to do these practices in the springtime, I’m able to realize the love I have for football.”

Guarantano started his football career in New Jersey. The quarterback led the Bergen Catholic High School Crusaders during his time in Oradell, New Jersey. While there, he became a 2016 Under Armour All-American and was ranked as the No. 3 dual-threat quarterback.

Guarantano spent some time in Knoxville, Tennessee with the Tennessee Volunteers, putting his name all over the Vols record book during his time in the orange and white. He appeared in 41 games for Tennessee, racking up 38 touchdowns and over 6,000 yards. However, after a tough 2020 season, Guarantano made the decision to leave Knoxville.

Guarantano’s time in Knoxville proved he was a good option for the Cougars.

Ultimately, Guarantano chose to attend WSU after his decision to leave Knoxville, Tennessee. Despite never visiting campus, he said there were a ton of things that factored into his decision.

“It was the coaching staff, the history of Washington State, especially when Gardner was here and with transfer quarterbacks,” Guarantano says. “I’ve heard great things about Pullman being a fun place to be. I kind of got the sense from the coaching staff that the team was an enjoyable team to be around, and the players had good chemistry.”

His new quarterback coach has a ton of praise for the newest player in his position group.

“He throws the ball really, really well,” Stutzmann said. “His arm talent is up there. He is probably top two or three guys I have ever seen in person throw the football or worked with as a player or coach. He is very cerebral and mature; you can tell he has played a lot of football.”

“I’ve been in a lot of different systems, a few different coaches, but this system that [head coach Nick Rolovich] implemented kind of fits everything I did in high school,” Guarantano said. “It hasn’t been that hard of a change.”

All of this experience will help him on the field but is also set to help his teammates even after he is gone.

“What he has been able to do is be like an extra coach in the room and an extra coach on the field,” Stutzmann says. “Being able to show those guys whether it is through his own actions or even talk to them a bit about some things they may be struggling with.”

The journey has been very different for Ollie, who comes to Pullman from Wylie, Texas. Despite this being his third season in the crimson and gray, the receiver is still looking for his breakout year.

Ollie was a three-star prospect coming out of high school in 2019. While at Wylie High School, the receiver was a three-time letter winner in both football and basketball.

“It made me a better person,” Ollie says. “I learned a lot of things playing football. I learned more on the football field about life than anybody has taught me. I see it as a way out to make life better for me and my family.”

Ollie has not seen the field very much, but in last year’s season finale against Utah, he made his first career catch: a 15-yard reception.

“I wish I could have done something after [the catch],” Ollie says. “But you know, it was great. It has been a long time coming. It felt good and made me hungry to get some more.”

Although the two have had very different journeys to WSU, both are focused on getting to share the field this upcoming season with their teammates.

“I’m looking forward to just getting on the field, playing with my teammates,” Ollie said. “We’ve been grinding for a long time. Last year, we didn’t get the time we wanted, so being on the field and playing for them is going to be great.”

As the season approaches, both players are certainly looking forward to one thing in particular: wins and, more specifically, a Pac-12 Championship.

“Expectation is to win every game, like everyone,” said Guarantano. “But I am more so looking for a great connection with my teammates and be able to go to a Pac-12 Championship.”

The two will get to see the field together for the first time when WSU hosts Utah State in September. Both players are in line right now to be major contributors on Saturdays for the Cougs this fall, but Ollie summed their drive up perfectly.

“I don’t really look at personal accolades and stuff like that. I just want to let people know I belong here,” he said. “Just come out and do what I do best.”