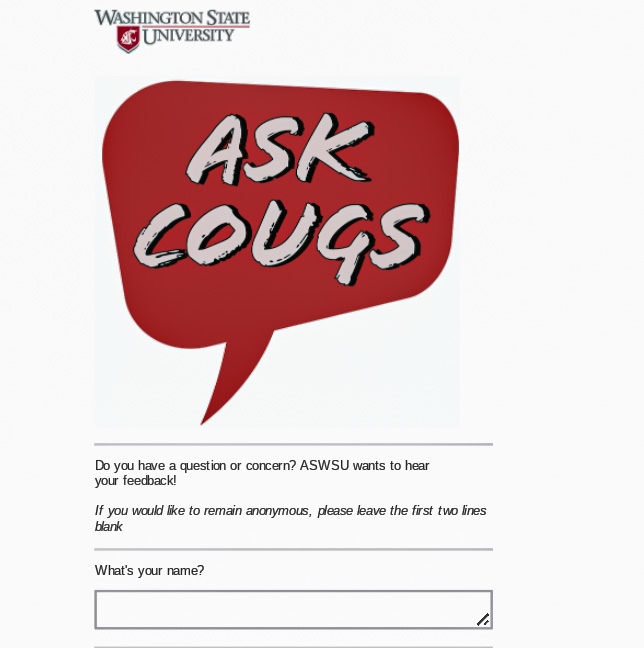 The Ask Cougs portal is a way to expedite the process of receiving students’ questions and concerns.

ASWSU’s new portal is under development to increase students’ access to resources and increase transparency and communication between students and the university.

Students can submit their concerns or questions anonymously, said ASWSU Senator Oluwanifemi Shola-Dare. Currently, the Ask Cougs portal is in the form of a Qualtrics survey, which has different departments listed.

“You can never have too many avenues for students to get access to resources,” she said.

Shola-Dare reached out to ASWSU President Curtis Cohen about creating an Ask Cougs portal. The Ask Cougs portal idea was inspired by The University of Alabama’s Bama Asks portal, which is run by the student government, she said.

The hope is for the Ask Cougs portal to be permanent, Shola-Dare said. However, the continuation of the project would be up to the next ASWSU president and vice president.

The portal could possibly be permanent depending on how effective students find it, Cohen said.

He said the Ask Cougs portal is similar to the suggestion box at the main level of the Compton Union Building but in an online format.

This portal would be more accessible for students who are not in Pullman, are not in the CUB or are doing online classes, he said.

Cohen said the portal is still being developed and tested out. The portal has been opened to individuals in ASWSU to see what they think about it.

The portal is another way to expedite the process of receiving students’ questions and concerns, he said.

Cohen said the plan is to have the portal launched in the summer and have it fully implemented by this fall.

The goal is to have somebody from the WSU’s Division of Student Affairs team manage the portal, look at the questions and promptly submit answers, he said.

A bylaw amendment would need to be added so the job description requires Student Affairs to manage the portal, Cohen said.

The purpose of the portal is to create multiple avenues for students to access resources and information, Shola-Dare said.

“Our main goal as the student body is to ensure that we’re properly advocating for the student voice and more important for reaching out to students,” Cohen said.