The Daily Evergreen • May 8, 2021 • https://dailyevergreen.com/107560/news/board-of-regents-approve-athletics-budget/

Board of Regents approve athletics budget 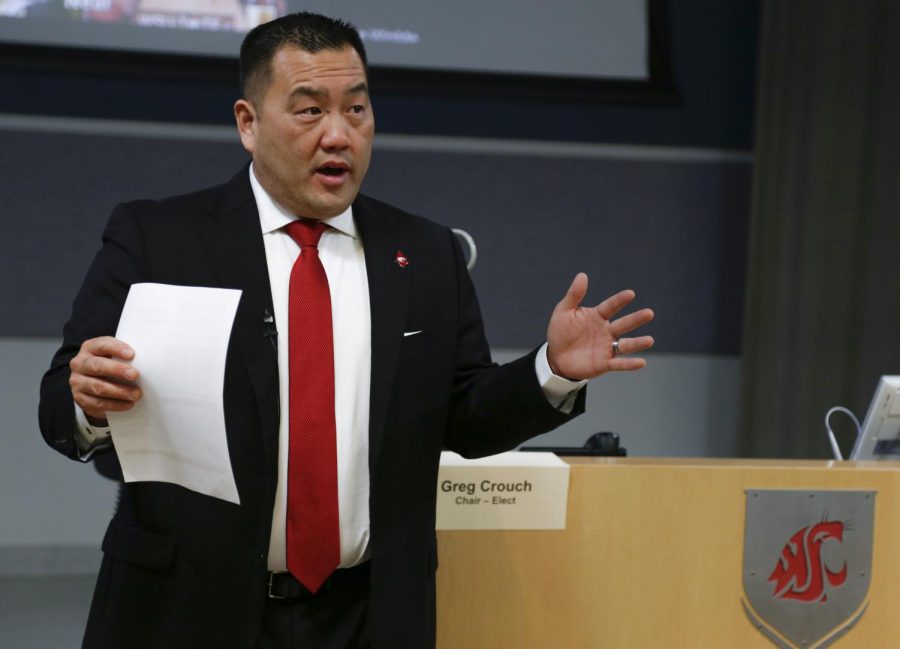 The new budget means that athletics will receive $35.6 million in external funding through general university bonds.

The new budget means that athletics will receive $35.6 million in external funding through general university bonds. These bonds are set to be paid back through future Pac-12 media and bowl revenue distributions, according to the documents.

The bonds much reach their maturity by Oct. 1, 2041, with a maximum interest rate of five percent. This means that all bonds must be paid off by the beginning of October 2041 and bonds can only accrue a maximum of five percent interest per year.

This plan would have WSU paying approximately $63 million over 18 years to cover the bonds. It would also include interest-only payments through 2032 to avoid having larger payments due near the date of maturity.

The plan seems to be banking on a new media contract. The Pac-12’s deal was massive when it was signed, but has become one of the worst deals among the Power Five conferences as the other four have signed with major networks.

The Pac-12 is currently looking for a new commissioner, who would be negotiating that new media deal on behalf of the conference.

According to the documents, the plan also brings additional savings in the form of refinancing debt from fall 2020 down to a lower interest rate, which will save WSU roughly $11 million, helping cover future pandemic-related costs in the upcoming fiscal year.

This would help alleviate any deficit in the 2022 fiscal year budget, which was also discussed during the meeting. As of now, WSU is banking on at least 50 percent capacity next year but is working on contingency plans if that is not able to be achieved, according to the documents.

WSU is also going to return to honoring its commitment to cover the $2.4 million Pac-12 affiliation fees starting in the fiscal year 2023, according to the documents.

“WSU’s affiliation with a top-level intercollegiate athletics conference like the Pac-12 brings us unrivaled visibility on a national scale that continues to benefit students, faculty, staff, alumni and other stakeholders throughout the University system,” WSU President Kirk Schulz told WSU Insider.

The new plan follows athletics’ cost-containment plan that began around the beginning of the pandemic. Coaches took mandatory and voluntary pay cuts and have waived all bonuses for this fiscal year, according to the documents.

“Prior to the pandemic, we were on course to achieve our budget recovery plan of a balanced budget by FY2023,” Athletic Director Pat Chun said. “This new budget proposal puts us back on that path. We are fortunate that during the pandemic we have continued to set records in our Cougar Athletic Fund and in corporate sponsorships, emblematic with our $11 million deal to name Gesa Field.”

This new athletics budget will not include any added fees for WSU students, according to the documents.

All of this comes just days after Chun signed a contract extension through 2026. His new salary will be $700,000, an increase from the $650,000 he has been earning. This will also include a $50,000 increase each year of the first four years of the new extension, according to a press release from WSU Athletics.

Additionally, Chun will be eligible for bonuses based on annual fundraising and fiscal management goals. The deal also includes a clause that allows the university to furlough Chun for up to 60 days per academic year, according to the WSU press release.

“[Chun] has done an exceptional job of leading our athletics program during the past three years,” Schulz said. “He has proven himself to be one of the nation’s most influential Power 5 athletic directors, guiding Cougar Athletics to success not only in athletic competition but also in the classroom, in fundraising and in creating innovative programs to benefit the welfare of our student-athletes. Pat personifies the values of Washington State University and we are proud that he is a Coug.”

According to WSU’s press release, this extension will rank Chun ninth among the ten public Pac-12 universities’ athletic directors in terms of compensation.

The contract comes after Chun’s successes both on and off the field at WSU. Cougar athletes are seeing a resurgence in many sports with 35 All-American athletes and six NCAA Championship appearances, as well as academically with WSU student-athletes setting or equaling program highs for GPA in five of the previous six semesters, according to the press release.

Additionally, Chun has led the charge in record-setting fundraising and corporate deals, such as the deal with Gesa Credit Union.

“My family and I are grateful to President Schulz and the Board of Regents for their continued leadership and support,” Chun said. “It is an honor be a part of the WSU family and to serve an extraordinary group of student-athletes who continue to achieve academically and athletically. A culture of excellence has been established by our coaches and staff and we are now poised and positioned to reach new heights in the coming years.”