Miami’s reign is over 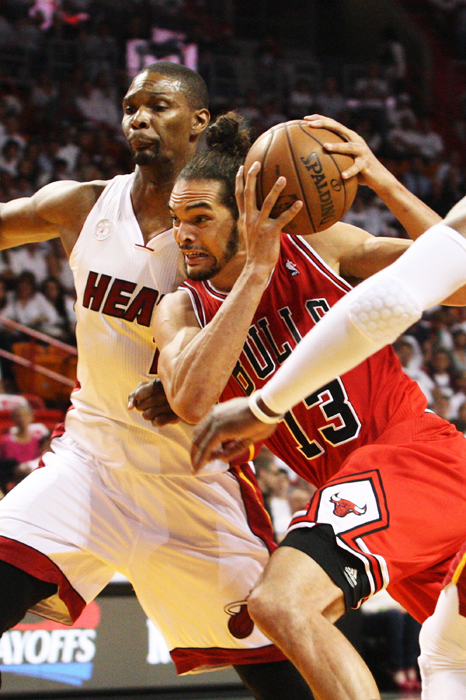 The team has won three consecutive Eastern Conference Finals and two consecutive NBA championships. This would not have happened if not for the addition of LeBron James three years ago, as The King chose to sign with Miami in an effort to win championship rings and solidify his place in NBA lore.

James is now in the final year of his contract, and the Heat are all in this season trying to win a third NBA championship in as many years.

However, there are a few reasons why the Heat will not be back in the Finals this season and why the Chicago Bulls will.

Dwayne Wade, the No. 2 man in Miami, saw a noticeable drop in production during last year’s playoffs. After averaging more than 21 points per game and shooting 52 percent during the regular season, he dropped to less than 16 points per game and shooting 45 percent in the playoffs. The ten-year veteran who battled nagging injuries all of last season is now pushing 32 years old and may be slowing.

Next is the all-time three-point king Ray Allen. Allen is now 38 years old and saw a nearly ten minute per game drop-off between his previous two seasons, along with a decline in field goal, three point, and free throw percentage. With the loss of veteran shooting guard Mike Miller to free agency, this leaves Wade and Allen pretty lonely at the shooting guard position, and people shouldn’t expect Allen to return to pre-2010 form.

The Heat were able to land Greg Oden and Michael Beasley to try and help out Chris Bosh down on the post this offseason, both being players that have been dubbed ‘busts.’ In his injury-plagued career, Oden is yet to start 40 games in an NBA season or average more than 23 minutes per game due to ongoing knee injuries.  Beasley on the other hand has simply underperformed since being drafted second overall in the 2008 draft and is coming off career lows in nearly every major statistical category.

This all amounts to one thing: The Heat are not the same team they were a year ago.

The Chicago Bulls are a completely different team now with Derrick Rose leading the difference. Chicago played without Rose for all of last season and still clinched the fifth seed out of the East, won their opening playoff series against the Nets and ranked third in the NBA in points allowed.

Without Rose last year the Bulls remained a top defensive club, but the team struggled to put points on the board. A healthy and focused 25-year-old Rose should add 20-plus points per game and eight-plus assists per game. This type of production from the former NBA MVP should add at least 10 wins to their record.

Given that the team production as a whole will benefit from his return, and especially secondary scorers like Luol Deng and Carlos Boozer, it could mean upwards of 60-plus wins and possibly a return to the first or second seed out of the East.

If Chicago and Miami win the top two seeds, there is a good chance they could meet for a raucous Eastern Conference Finals.

The Bulls would emerge victorious in this series. Nobody plays defense against LeBron like Chicago does, and if Chicago is healthy in the playoffs with Rose, Deng, Boozer, Joakim Noah, and the young defensively-gifted Jimmy Butler all running the floor, the aging and injury-prone Heat will not be able to keep up.