Hard ice cream is great, but soft serve is better 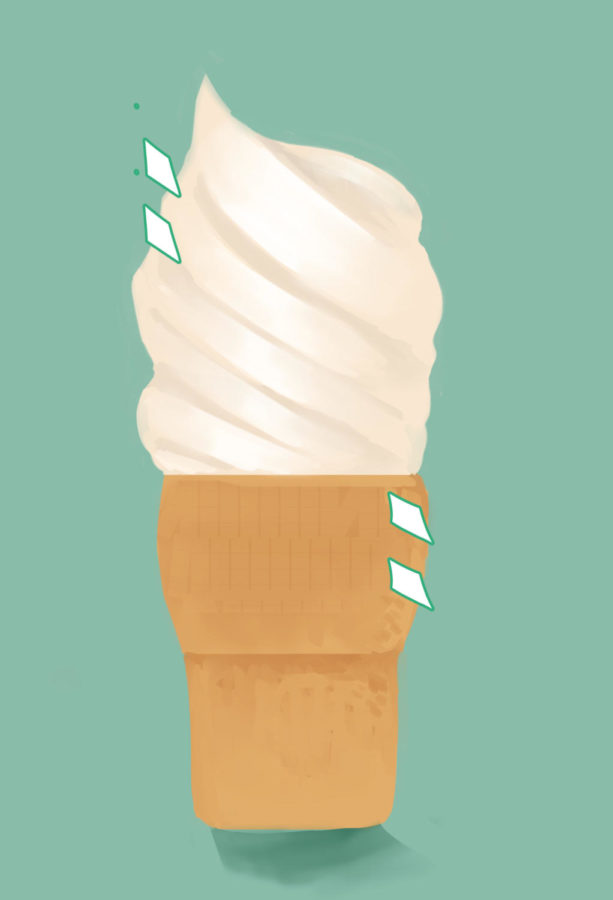 With its wide variety of topping choices and a reliably sweet and smooth taste, soft serve is the ultimate ice cream experience.

I love ice cream. Especially soft serve. My mother and I would go to Byrne Dairy now and then during the summer to get a chocolate and vanilla soft serve. A golf course nearby also had soft serve, including fruity flavors like blackberry.

If not Byrne Dairy, Heid’s Sweet Treats in the village of Liverpool, New York. Right next to Heid’s, which sold hot dogs and some other things, Sweet Treats provided dessert. Delicious soft serve.

There was also a place close to the Central North Syracuse High School that had good soft serve. German chocolate cake flavor was one of the options.

Soft serve was really not that hard to find, and I mean the good stuff.

He has a point there. The texture of soft serve is, personally, preferable to hard ice cream. It is smoother; I just like it better that way.

The downside to soft serve, however, is that it is less convenient to get, here more so than where I grew up. Regardless, you can shove hard ice cream in your freezer for whenever you want it. Soft serve, not so much.

And he is right. It melts rapidly, and failure to eat it fast enough means you should absolutely have napkins close by. Unfortunately, the cone might end up soggy, too. Unless, of course, you like it that way.

Cotsworth said he likes getting his ice cream at McDonald’s because they have the McFlurries, but he really likes getting ice cream from Silverwood. I am not surprised that an amusement park has such memorable ice cream. With everything being so overpriced, it better be good!

I do not believe our own famous creamery, Ferdinand’s Ice Cream Shoppe, offers soft serve, which is sad, but all of its hard ice cream flavors are so good that it hardly matters. I think McDonald’s and Dairy Queen are probably the only places in Pullman I know of that sell soft serve.

If soft serve had as many flavors as hard ice cream, I would be excited, but Cotsworth said he probably would not eat them. I can understand that he already has a flavor that he loves, but personally, I want to try a bunch of new flavors.

Like an ice cream quest for the best soft serve ever or something.

Mikayla Makle, senior English major, said she loves soft serve, but she prefers hard ice cream because it lasts. She likes it best when her ice cream is not melty but is somewhat soft.

It is sort of annoying when you have hard ice cream so frozen you cannot get it out of the carton with the ice cream scoop. Sure, just run the scoop under hot water, you say, but listen here, soft serve does not have that problem.

Makle said the hard ice cream is better if she is on the go, wants to get home, is making a sundae, or is just relaxing on the couch. Although sometimes it is too difficult to get out of the container or is hard to eat.

Makle said she does not know why a lot of places do not have soft serve, and she loves soft serve on a cone. The rapid melting, however, or the fact that soft serve is not all created equally is a drawback.

Flavor-wise, the variety offered by hard ice cream is immense. I remember my mother liking Rocky Road a lot. I used to have an obsession with Panda Paws, although I will eat almost anything. For Makle, it is a little different.

“Chocolate, hands-down. If we’re talking about Ben & Jerry’s, the chocolate fudge brownie. I have some in my freezer right now,” Makle said. “Anything with chocolate in it is the best flavor ever.”

Hard ice cream, eaten in a bowl, is a method Mackle rates ten out of ten. While she is not big on cake, Mackle said she loves ice cream cake but would rate ice cream with cake or ice cream sandwiches at around a seven.

Makle is right when she said that ice cream sandwiches get all over your fingers. At least, the normal ones seem to.

Flix Cafe sells some ice cream sandwiches using Ferdinand’s ice cream between chocolate chip cookies, not those sort of cakey chocolate bars. I think those ones hold together much better, and the cookie will not stick to your fingers.

Makle mentioned Cold Stone Creamery as she mentally built her ultimate ice cream – chocolate ice cream with brownie, Oreos, whipped cream and cherries with some waffle cone. We had a Cold Stone in the mall in Syracuse; it was always delicious.

While places like Ferdinand’s and Cold Stone offer amazing hard ice cream for those who prefer it, and Cold Stone definitely gives people the ability to create their dream bowl of ice cream like Makle’s chocolate delight, I still prefer soft serve.

I have yet to find a good soft serve place in Washington state, not that I have looked much. I am excited to see if anywhere will outshine my memories of soft serve in the summer in New York. One of the best ways to beat the heat.