The Daily Evergreen • May 28, 2021 • https://dailyevergreen.com/108140/news/feeling-the-movement-kinesiology-professor-connects-exercise-body-image/

Professor’s experience with yoga influences her studies on mindfulness, self-compassion during physical activity 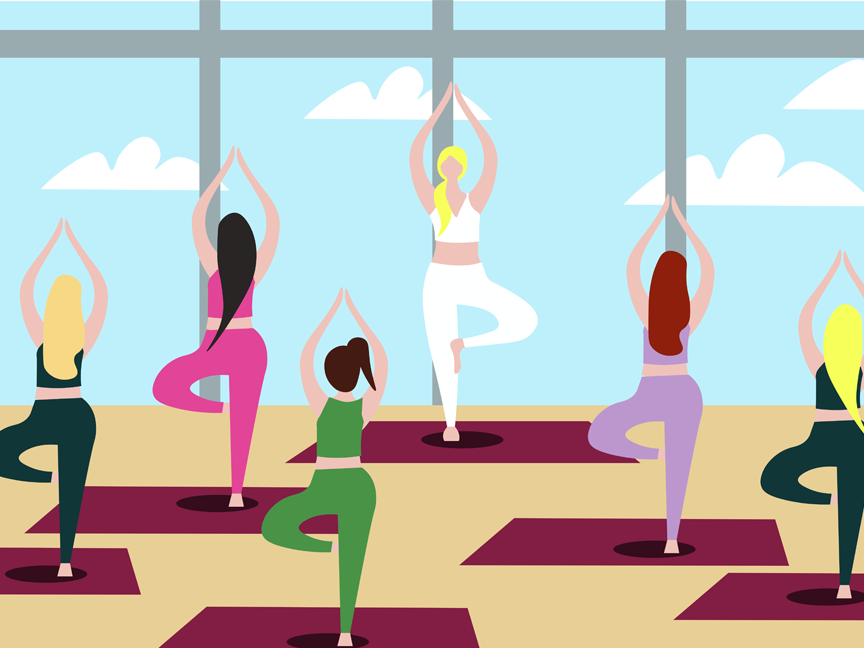 "I really want a safe place for girls to be able to go to feel like themselves and maybe to discover themselves,” said Anne Cox, WSU Department of Kinesiology and Educational Psychology associate professor.

A WSU kinesiology professor is developing a physical education program that will introduce girls aged 12 to 14 years to a wide range of movements that will help them feel more comfortable in their bodies.

Anne Cox, WSU Department of Kinesiology and Educational Psychology associate professor, said she was a “gym person” her whole life.

When Cox was young, she said she was told that she had to match the boys in her class in order to be good at sports.

Cox said she played basketball in college, and after, she continued doing similar exercise routines. She would lift weights, run and participate in high-intensity group fitness workouts like body pump.

Then she picked up yoga.

“I went from somebody who exercised in order to compete or burn calories … to somebody who finally discovered that intrinsic motivation and enjoyment was the best guide to being your best self in movement,” she said.

Cox was recognized by the WSU College of Education earlier this month for her research on the connection between exercise and body image.

Through a cultivation of studies spanning several years, Cox reached several conclusions about the relationship between exercise and body image. When people enjoy the exercise they are doing, they are more likely to continue doing it more frequently over time, which is called intrinsic motivation, she said.

Cox said her current research focus is how mindfulness and self-compassion play a role in making physical activity more meaningful and enjoyable.

Young girls, in particular, tend to become uncomfortable in their bodies while entering early adolescence as their bodies begin to physically change, she said. While girls go through puberty, they also face societal changes.

Girls get treated differently as they face societal expectations about how they should look or behave, Cox said, and the emphasis is clearly on outward appearance.

“All of those things that start to happen around puberty can lead to more doubt, more insecurity, more discomfort,” Cox said. “That impacts physical activity experiences and behaviors in a big way.”

Cox said the curriculum she is developing for the physical education program will include dance, cardio and kickboxing, as well as unusual forms of movements that are different from what is conventionally taught during general physical education classes in school.

“I really want a safe place for girls to be able to go to feel like themselves and maybe to discover themselves,” she said.

Having a specialized physical education program is not the only way to exercise or enjoy exercise. Recognizing and using internal cues, like measuring breathing, exertion, pain and fatigue, can help people feel good during exercise, Cox said.

In some of her studies, Cox said she would ask research participants how good they felt on a simple scale from negative five to positive five. Ideally, she wants them to be at a three.

Yoga naturally uses and focuses on internal cues, she said.

“So, a basic example is just tuning in to ‘What is your breath?’” she said. “Other examples would be more alignment cues, so just noticing what it feels like when your shoulders are rounded versus when your shoulder blades slide onto your back.”

It seems simple, Cox said, because people are born knowing their internal cues. But in adolescence, people are taught to not listen to those cues.

Yoga is a gateway to relearn internal cues, Cox said.

Adam Williams, instructor at Sanctuary Yoga, said he practices yoga to find a quiet space in his day.

Williams has always been athletic and especially likes marathons and trail running, which can be strenuous on his body. Yoga compliments his other exercises by helping his breathwork, flexibility and endurance, he said.

The way yoga is taught can also influence a person’s body image and enjoyment of the exercise, Cox said.

In one of her studies, Cox had three yoga instructors lead a class with different approaches. The first instructor only gave neutral instructions on when and how to move. The second instructor focused on mindfulness, and the third emphasized how certain poses would change a body’s appearance. The third instructor had the most negative experiences in the class.

Williams said he always tells his students to “find their intention.” He does not require them to tell him, but he wants them to know why they got on their mat that day, even if it is as simple as being dragged into a class by their friends like he was a couple of years ago.

“You can do it by yourself. It’s a quiet practice,” Hudak said. “You really get into it; it’s very intellectually stimulating.”

She said yoga is about creating balance in a person’s body and mind, then bringing that balance into their life.

“If you can learn to create a balance in the body, you can take it into your emotions, your lifestyle, trying to find that balance in your life,” she said.

Ultimately, Cox said people have to allow themselves to be open to experimenting with different types of movement until they find the exercises that they think are enjoyable.

“As human beings, we were just designed to move,” she said. “Movement feels good for everybody, with some exceptions, if they can find the right way to move.”