The Daily Evergreen • May 28, 2021 • https://dailyevergreen.com/108182/opinion/satire-dear-military-recruiters-stop-texting-me/

The military is just as bad as telemarketers; put me on the No Call list 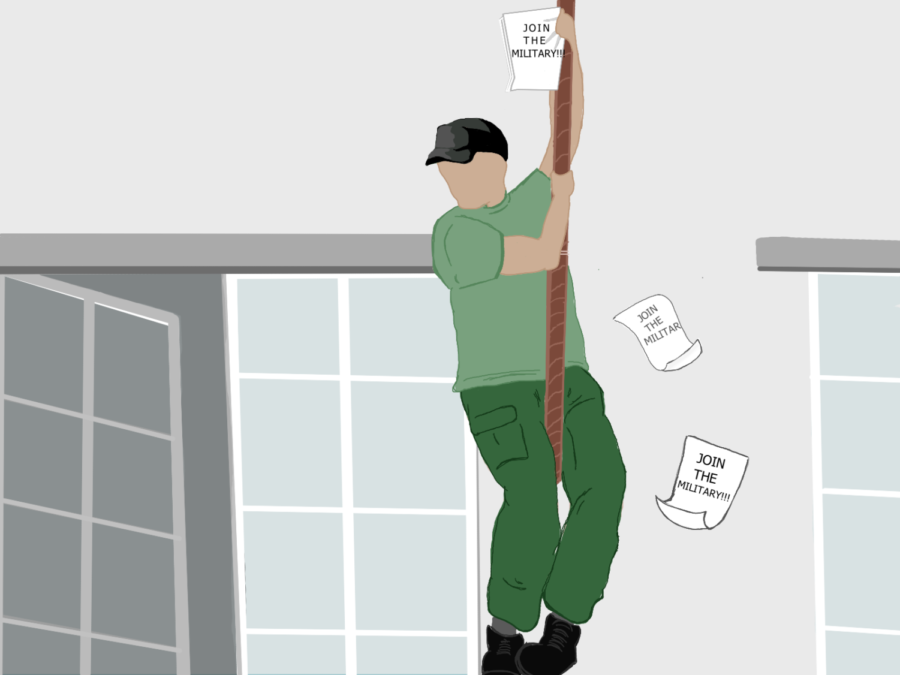 Recruiters seem to be sneaking their way into everyone's emails and high schools to find new recruits.

People who serve in the military have my respect. It is brave, both for the risk of combat — no matter how great of a risk it is at that time — but also for the time commitment and the seemingly unwavering obedience to whatever you are told.

Whether it is cleaning the toilet with a toothbrush, making your bed with perfect hospital corners or running 10 miles.

I am probably the least likely to be a soldier type. I hate the heat. I do not do well with prolonged sun exposure, and running is the absolute worst. Land sports, in general, are not my thing. Obedience, really, is selective for me.

If it is my job, it is one thing. I will do seemingly tedious things for work, as long as they are not asking me to run a marathon or something. But the military does not seem like the place for someone like me, who is more than happy to question “why.”

If you want me to do something, and I do not see the point, I might inquire why. If the answer does not satisfy or there is no good incentive (for example, my paycheck so I can buy groceries), tough luck.

I will give my all to a job I like. But soldiering around and getting yelled at is not a job I want.

The military really likes pestering people, though. They text, they Facebook message, and I feel bad ignoring it, so I usually try to politely say thanks but no thanks.

Lizzy Bisnesse, freshman with an undeclared major, said she gets these messages frequently as well.

“They’re kinda like my stupid ex-boyfriend, you know? They chase after you when you don’t want them. You forget about them for a bit, and then you get sent another message,” Bisnesse said.

Just because she does not know what she wants from her future yet, Bisnesse said that does not mean she is incapable of knowing what she does not want. A military career is among the things she and I both are uninterested in pursuing.

The military does feel like a lurker of sorts, waiting in the shadows for an opportunity to pounce and drag me into their recruitment office. Promises of stipends and job opportunities are set out like bait, hoping to catch someone.

Promises of personal reform, too. Whether you be a hotshot with a huge ego, or someone who needs an extra push in life, joining the military can be an all-encompassing equalizer.

Susan Lazae, a mother of three, said she encouraged (translation: pressured) her eldest son to enlist in hopes that they would fix him.

“He had attitude problems and spent all day hiding inside on his computer. I never understood why he didn’t want to do anything, so I convinced him to join,” Lazae said. “But he quit.”

Both the annoying frequency of the military recruitment messages I see and the aggressiveness of some parents who want their children to join — regardless of how the child feels — are off-putting.

I wish there was a list I could be put on for all military branches. One that gets across the point that “ask and you shall receive” is not going to work with getting me to join up.

Granted, the surface-level annoying ex-boyfriend vibes of military recruitment are largely painless. The military is just trying to get people to join, and really, there are no hard feelings if you are not interested.

Those who pressure people into joining though, those people should knock it off. For whatever the reason, if someone does not want to join, do not try to make them.