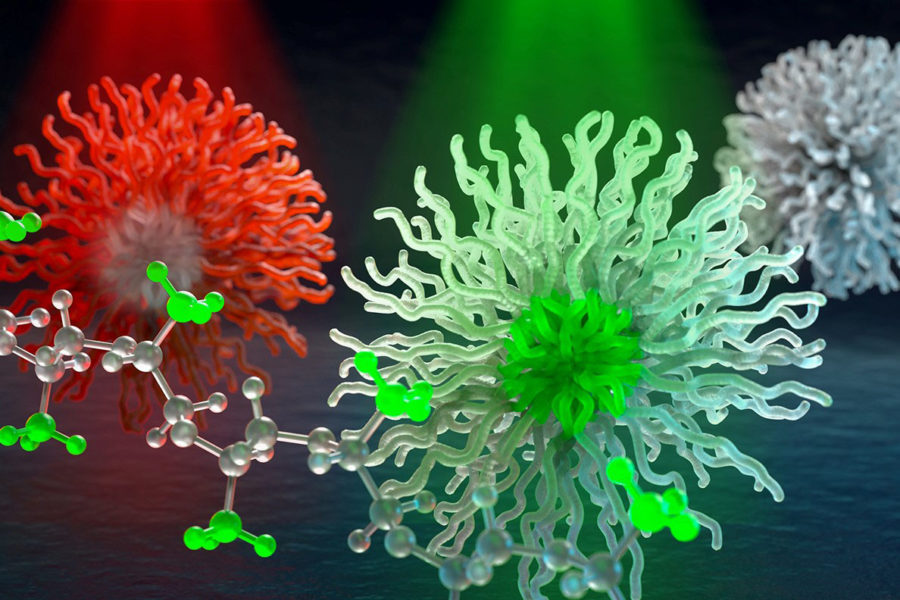 Soft X-rays resonate differently with certain bonds and molecules, giving scientists insight into the structure of nanocarriers, such as the one pictured here.

In a recent study published in Nature Communications, scientists used a type of “soft” X-ray to probe organic structures, allowing them to locate and identify different structural components.

Soft X-rays are lower in energy than the kind used by a physician or dentist, Collins said. This type of radiation has more energy than visible light but less energy than traditional X-rays.

Different atoms and molecules absorb light at different wavelengths, he said. By varying the energy level of the soft X-rays, researchers can achieve a special condition called resonance. This is what helps identify where certain atoms and bonds are within a molecule.

“You can figure out which molecule you’re looking at just because the molecule’s got a certain structure, a certain bonding arrangement that’s different from another molecule, and you can actually tell them apart now,” Collins said. “That’s something that the traditional techniques that we rely on for nanostructure can’t do.”

Collins said he used this technique in dry environments before, such as with carbon-based electronics. However, his current research with soft X-rays focuses on liquid environments because that is where many biological molecules are found.

“I realized that we’re working on electronics stuff, but there’s also a whole world of carbon-based stuff that has more biological or medical applications,” he said.

One application is called a nanocarrier, said Cheng Wang, study co-author and Advanced Light Source staff scientist. These tiny structures can encase other molecules, such as mRNA or a drug compound.

There are a number of ways nanocarriers can be used, he said.

For example, milk contains calcium, which is surrounded by a protein called casein. Encapsulating iron in a casein nanocarrier could make supplements taste better for iron-deficient people, Wang said.

A single-molecule nanocarrier called a polysoap could be used to trap oil that is contaminating bodies of water, he said.

The Pfizer and Moderna vaccines both use nanocarriers to deliver mRNA, Collins said.

Nanocarriers could also be used to deliver chemotherapy drugs specifically to cancer cells rather than every cell, which is what causes patients to react to the treatment, he said. Targeting the cancer cells mitigates the impact of the treatment on the rest of the body.

Current methods for locating molecules in a system can be costly and difficult to perform, said Terry McAfee, study co-author and Advanced Light Source senior scientific engineering associate. Some techniques involve changing the chemical composition of the molecule, such as using fluorescent tags.

Soft X-rays allow researchers to track molecules without changing the structure because it relies on the intrinsic properties of atoms and bonds, McAfee said.

“We don’t have to alter the sample, we just alter our beam energy, which can be done in a second,” he said. “We can highlight different aspects of the system depending on what energy we use.”

The function of a nanocarrier is often dependent on its form. Understanding the orientation of molecules in a nanocarrier system can help design better nanocarriers, McAfee said.

The technique could be helpful in designing drug nanocarriers because it shows how much of a drug is inside the structure and under what conditions the drug will be delivered to the appropriate cells. Other techniques might only show that a drug is present in the sample, not whether it is in a nanocarrier.

“This is one of the first demonstrations of this capability,” Wang said. “There’s just so many applications we can think of.”