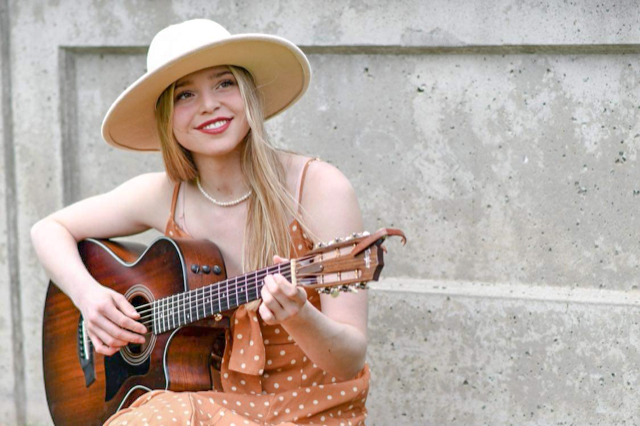 Izzy Burns, pictured here, said her grandfather and mother would play music for her during her recovery period after surgery.

A Moscow High School graduate from the class of 2021 was inspired to begin her music career after growing up with health problems.

Singer-songwriter Izzy Burns found her love for composing and performing music after having a pulmonary aspiration as a newborn.

Burns said she was born with pulmonary problems and was forced to spend the early years of her childhood relying on a breathing tube to regulate her respiratory function. Over the next several years of her life, she underwent several surgeries.

Burns said she found her love for music through her grandfather and mother who would play it for her during her recovery period.

After being gifted a guitar from her grandparents, she began guitar lessons and later started writing her own music. Since then, Burns has performed at many events in the Palouse area and released many songs on various streaming platforms.

“Around late elementary school, I started playing around Moscow more,” she said. “I would go to things like [the] renaissance fair and I’d play the kid’s stage. I would play at open mics … [which] is what brought me to my scene of music.”

In early 2020, Burns recorded and released her first album, “You Can’t Stop Me Now.” The album features 10 songs including her most streamed song “Autopilot” which has over 34,000 streams on Spotify.

“I released that first album, and got a lot of really good response from people in the area, and started making music videos,” she said.

Burns said that she gets a lot of her songwriting inspiration from her feelings and uses songwriting as a way to help express her emotions.

“I went on a trip to Florida to play at a tournament for [beach volleyball,] so I wrote this song called ‘The Beach Song,’” she said. “It was just a really special trip … with my mom and just different people.”

“A Heartbeat of Your Time,” the title of Burns’ latest extended play and one of her songs, was written as a way to help cope with the passing of her close friend and mentor Paul Anders in early 2020.

“The day [he passed], I actually wrote “A Heartbeat of Your Time,” because I just felt so, so lost, and it was a …. very therapeutic experience for me,” she said. “[It was] also more of a way for me to say goodbye.”

This fall, Burns is attending Colorado Mesa University, where she will be playing volleyball. She plans on majoring in music business. Burns said she hopes living in a new area will help expose more people to her music.

“Denver is like four hours away, so I’m super excited to play gigs there at some point,” she said, “Bigger gigs, more places, more unfamiliar people. I think that is just the way of doing it, and just kind of being authentic.”

Burns said that by studying music, she hopes to learn more about the industry and hopefully get signed to a record label.

Burns’ music can be found on all streaming platforms, and her music videos can be streamed on YouTube. To find her music and social media, people can check out her website.