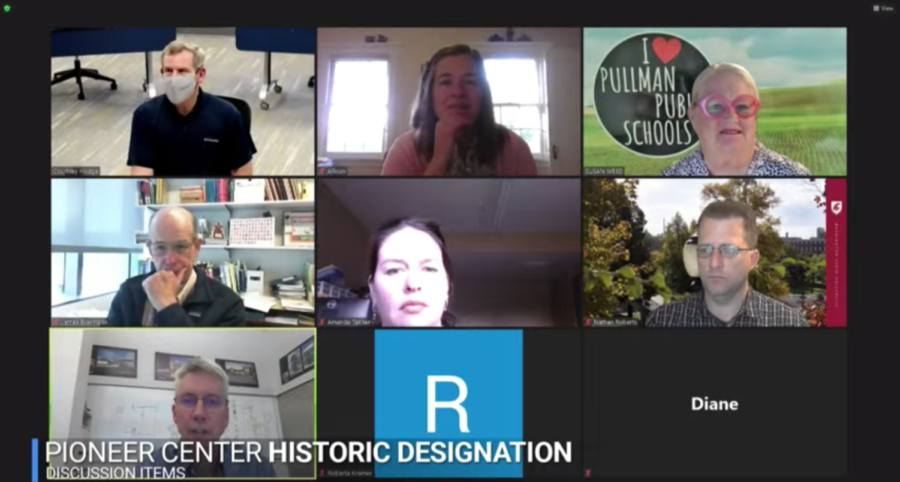 Formerly known as the old Franklin Elementary School, the center is located at 240 SE Dexter Street, according to the proposition.

“The city has moved out of their half of the building and it now appears that the [school] district will own the building for some time,” said board member Allison Munch-Rotolo. “What the interest of the [Pullman] Historic Preservation Commission would be is to ensure that the building would be preserved permanently. This would be the way to do it.”

Should the school district decide not to own the building in the future, the next owner(s) may need to seek approval from the preservation commission to make changes, which include adding to the building or tearing it down, Munch-Rotolo said.

“This is one of those opportunities where we can have a three-dimensional learning tool right in the midst of our town,” said Ned Warnick, Pullman Historic Preservation Commission chair. “This is … a giant step forward for the district to really declare their only … historically significant building at this time.”

According to the proposition, a portion of the building constructed in 1939 “embodies the distinctive Great Depression era [Public Works Administration] Moderne style of architecture.”

The building can teach children about mid-century modern architecture and the history of brick school buildings constructed in towns across the nation during the Great Depression, Warnick said.

Approving Pioneer Center for historic designation would mean the preservation commission has the ability to review alterations to the property, he said.

“This would be a really … great win for I think the city, the school district and the culture of our town for us to be able to see this listed on the local register,” Warnick said.

The board will vote on whether they want to approve the Pioneer Center for historic designation at its next meeting, said board member Susan Weed.

Board members also unanimously approved the declaration of bus no. 9 as surplus property, which means the school district must dispose of the bus in accordance with guidelines established by the Washington State Office of Superintendent of Public Instruction.

The school bus is no longer operational, according to the resolution presented at the meeting. A new electric bus purchased through a grant from the Washington State Department of Ecology will replace the school district’s existing diesel bus.

“One of the conditions [of the grant] is that the diesel bus cannot be sold as surplus [and it] has to be destroyed to ensure that the engine and chassis are taken out of service,” Superintendent Bob Maxwell said.