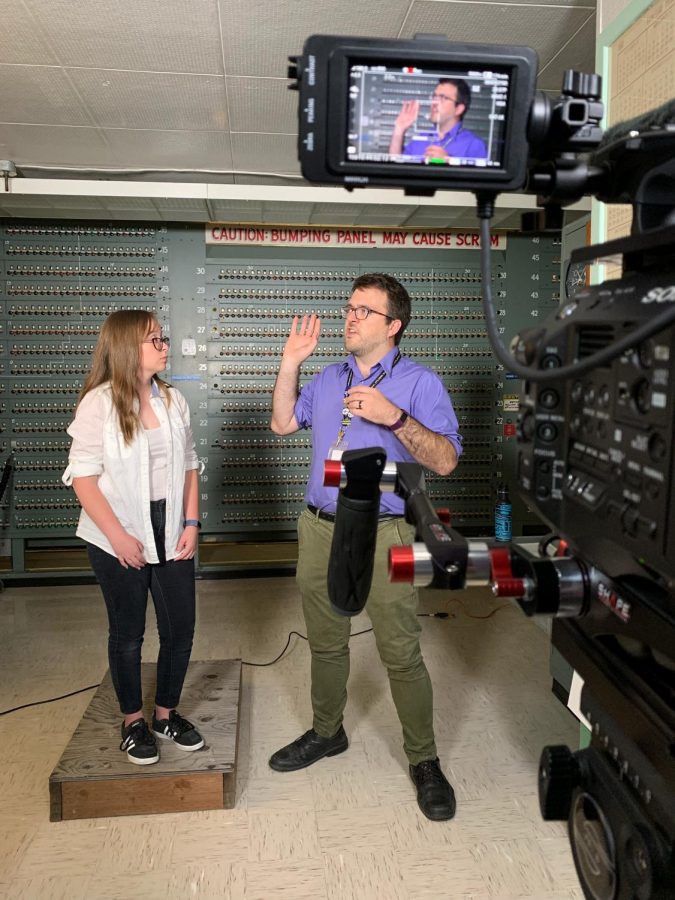 Robert Franklin was contacted by the museum to be in the film because of his background as a historian.

A WSU professor contributed to a film released in September 2020 called “The Manhattan Project Electronic Field Trip,” which was recently nominated for a Daytime Emmy.

A portion of the film was shot in Tri-Cities, Washington, and focused on the Hanford Site. Hanford is a decommissioned nuclear production complex that was part of the Manhattan Project. The project helped produce the world’s first nuclear weapons during World War II.

“You never expect that you’re going to do anything that’s going to get that level of recognition,” he said.

The award ceremony will be held on June 25, 2021, and is run by the National Academy of Television Arts and Sciences.

The National World War II Museum’s staff in New Orleans, Louisiana, ran the project. Franklin said it was nice to be connected with the museum and the hard work going into the project.

Franklin said the film explores how the Manhattan Project’s three major sites contributed to the creation of the first atomic weapons.

“The film starts with a high-level overview of the beginning of the Manhattan Project,” he said. “The concern of some scientists who were worried that Germany was on the way toward building an atomic bomb and then proceeds to the first of the three sites.”

The film goes into a brief overview of how the Hanford site reactor works, Franklin said. He is interviewed by a local high school student and gives information to the student.

This process continues at the other sites at Oak Ridge, Tennessee, and Los Alamos, New Mexico, he said. The film goes into the background of each sites’ individual contribution to the Manhattan Project.

“Hanford produced plutonium for the Trinity Test and the Fat Man bomb (Nagasaki). Oak Ridge produced enriched uranium for the Little Man bomb (Hiroshima), and Los Alamos acted as a major science hub and the site where the bombs were assembled,” he said.

When the film originally premiered, it reached about 80,000 students and now has more than 20,000 views on YouTube, Franklin said.

“That was the biggest thing I had ever been in,” he said. “Generally in class, I reached 50 students, and I’ve written two books, and those probably reached 1,000 [people].”

Franklin said he was contacted by the museum to be in the film because of his background as a historian.

“They wanted somebody to be the on-camera expert about Hanford for this documentary-style film they were making,” Franklin said.

The museum provided a script, but Franklin said he had the opportunity to make alterations because of his background as a historian.

“They were really great to work with in that fashion,” he said. “They had the base level of how they wanted the video to go, but they left it up to me to make sure that everything kind of fit with the history.”

Franklin said it was nice to work with people who trusted his skills as an educator and historian. He enjoyed witnessing how a film is made first-hand as well.

Sara Cassin, student at Delta High School in Pasco, Washington, said working on the film was an interesting experience, and she was able to visit a reactor at Hanford for a couple of days.

Cassin said her dad and one of her teachers pushed her to apply for the part she played in the film. She was skeptical at first but was excited when she ended up getting the role.

“I interviewed Robert Franklin, and he ended up answering a bunch of questions that we had on a list,” she said. “We just walked around and gave a tour and just talked about the part of the Manhattan Project that’s over here.”

Franklin said he enjoyed working with the high school students on set, along with everyone else who was on the project.

“We shot for hours and hours, and it’s like 12 minutes when it’s all done,” he said. “It was neat to be a part of that process.”