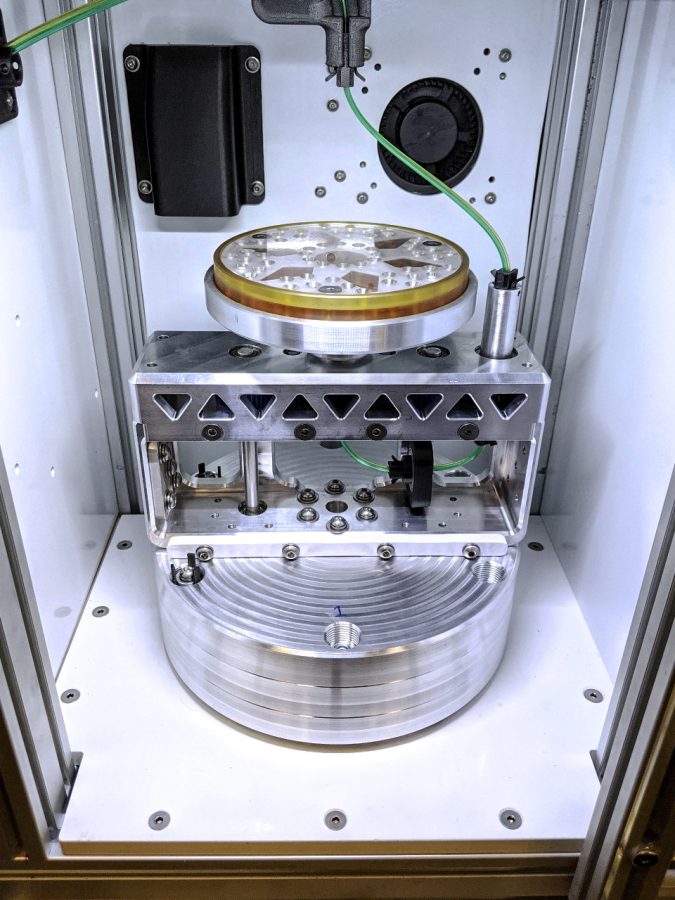 WSU researchers developed a device to rapidly grow killer T cells, immune cells that can be used to treat cancer.

A bioreactor is a vessel or device that grows biological products, Kaiphanliam said.

“What we’re really hoping [for is to have] this small system that’s meant to grow cells for patient-specific T cell therapies, [which] will make cancer immunotherapy more accessible,” Kaiphanliam said.

The bioreactor grows killer T cells outside of the body using a sample of a cancer patient’s blood. The cells are then transferred into the body to fight cancer, Van Wie said.

Cells cannot continually grow outside the body on their own, Van Wie said. That process is something that needs to be engineered and optimized.

“It’s not that you just throw them in a tank and feed them and they’ll be fine — they won’t,” Van Wie said. “We want to regulate that.”

The CentriFLEX bioreactor allows operators to control conditions in the cell culture, such as dissolved oxygen, pH and glucose concentration, Kaiphanliam said. The bioreactor can rapidly expand the quantity of T cells in the culture.

Radiation and chemotherapy are non-targeted treatments, meaning they attack both cancerous and healthy cells. These treatments are better for cancer spreading throughout the body, she said.

Immunotherapy is a treatment in which a patient’s immune cells are extracted, modified to specifically target their cancer, expanded outside the body and reintroduced into the patient to fight their cancer, Fraser-Hevlin said.

CAR-T cells are a special type of T cells modified to target a patient’s specific type of cancer, Fraser-Hevlin said.

“This treatment can be used in the case that the cancer has spread, but it also is meant to only attack the cancer cells, rather than our own healthy cells,” Kaiphanliam said.

One round of immunotherapy treatment uses a volume equivalent to about 40 percent of all T cells in an adult’s body. A single infusion costs $400,000, meaning a typical three-infusion course of treatment would cost over $1 million, she said.

Most costs associated with infusions come from manufacturing, Kaiphanliam said.

Kaiphanliam said she hopes they can make the bioreactor around the size of a microwave — small enough for hospitals and cancer treatment centers to have several on-site.

The bioreactor can also make other biological products, such as proteins and monoclonal antibodies, Fraser-Hevlin said.

The team’s background in chemical engineering gives them a unique perspective for the project. They take into account fluid mechanics and different forces acting on the cell culture in the bioreactor, Kaiphanliam said.

This research started with a $300,000 Early Grant for Exploratory Research from the National Science Foundation obtained by Van Wie and Bill Davis, professor of veterinary microbiology and pathology. The students used that money to obtain other grants to develop the bioreactor, such as the University of Washington Dempsey Startup Competition, Van Wie said.

Fraser-Hevlin said he wanted to go to graduate school for chemical engineering to help people by developing treatments and products such as CentriFLEX.

“Around the time I was in high school, I had someone in my family who went through a battle with cancer,” Fraser-Hevlin said. “I started to realize I wanted to help people … especially through medicine.”

Kaiphanliam and Fraser-Hevlin are working with WSU’s Center for Entrepreneurial Studies to launch a company to market their bioreactor. The company is called Ananta, which means “limitless” in Sanskrit, he said.

*Editor’s note: This story has been updated from a previous version to correct a factual error.