‘He knows it’s a great community, and he’s helped make it that way’

Ride along inspired police chief to apply for police cadet program; he plans to stay in Pullman after retirement 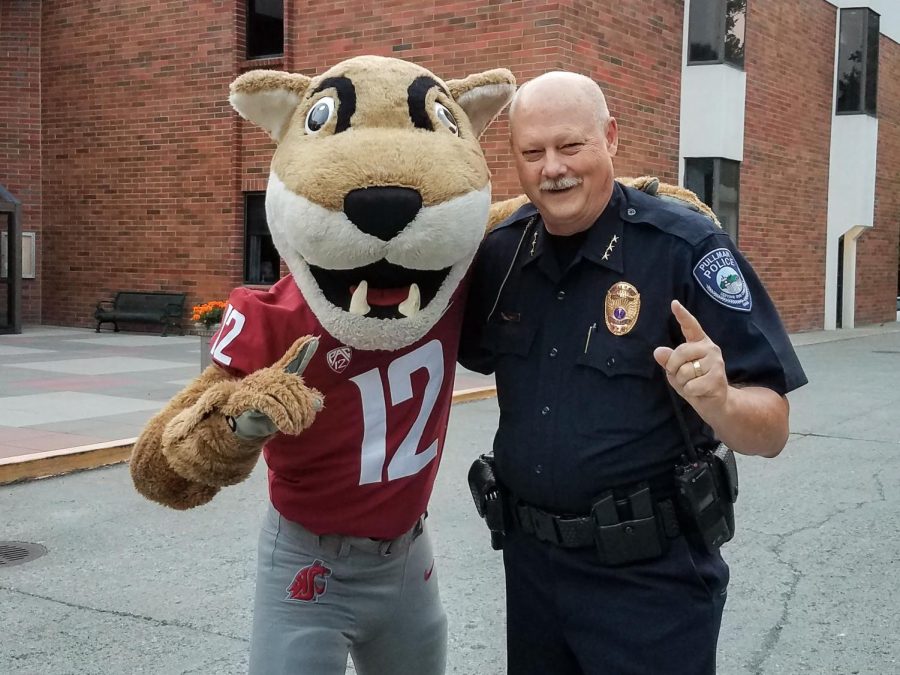 Pullman Police Chief Gary Jenkins, pictured here with Butch T. Cougar, will stay on as chief until a replacement is hired.

Pullman Police Chief Gary Jenkins will retire later this year after spending 47 years in law enforcement — but policing was not always the future he saw for himself.

“When I was in high school, my original plan for a career was a commercial airline pilot,” Jenkins said. “But when I was getting ready to graduate high school, it was right around the time the Vietnam War was ending, so there were tons of pilots available everywhere.”

Jenkins went on a police ride along and wrote a report about it for a high school class, he said. His experience inspired him to apply for the police cadet program in West Covina, California, where he worked until he turned 21.

He was then hired at the Claremont Police Department. Jenkins said he worked there for 33 years before he and his wife decided to leave Southern California.

In May 2010, Jenkins interviewed for the police chief position in Pullman. He said he also applied for a position at the West Richland Police Department.

Jenkins and his wife were having dinner at The Black Cypress when he got a phone call from Pullman Mayor Glenn Johnson, he said.

“I had already decided in my mind if I was offered West Richland and Pullman at the same time — I really liked Pullman,” he said.

Johnson said he knew he could not let Jenkins leave Pullman without signing a contract because he was an exceptional candidate.

“There were a lot of positives there that we knew he was going to be a good fit — I felt that,” Johnson said.

Jenkins is a forward thinker and an innovator, Johnson said. He led the push in 2013 for Pullman PD to have body-worn cameras, making it one of the first departments of its size to do so.

“In so many positions, including positions of leadership, it can be easy to glide along and not really make big changes or rock the boat,” said Darby Baldwin, administrative assistant to the chief. “What he has done is really the absolute opposite of that. He has constantly looked for ways to shake up what we’re doing … to make us a better department.”

Jenkins said he did not want to replicate Claremont PD in Pullman because it is its own department with unique dynamics.

“We need to make sure our department is a good fit for our community here,” he said.

Jenkins said he encourages officers to police with professionalism and compassion, which is Pullman PD’s motto.

Pullman Fire Chief Mike Heston said there is a friendly rivalry between police and fire; despite this, the two chiefs have been close friends since Jenkins moved to Pullman.

“He always seems to have time if I have a question or an issue or challenge to assist with that,” Heston said. “He’s never too busy.”

Jenkins is invested in the success of Pullman PD and all the people who work there, Baldwin said.

Baldwin is excited for Jenkins to retire, but was devastated when she heard he was leaving because he creates a working environment she looks forward to, she said.

“I just hope that he gets to do all of the things he has spent the last 47 years working to be able to do in retirement,” Baldwin said. “And [I hope] that he’ll miss us just a little bit.”

Jenkins said he is looking forward to spending more time woodworking and traveling with his wife to visit their children and grandchildren. He and his wife plan to stay in Pullman after he retires.

“We’re very grateful for the time he’s spent here in Pullman and for the fact he wants to stay here,” Johnson said. “He knows it’s a great community, and he’s helped make it that way.”

Jenkins waited to announce his retirement until he felt the department was in a good place. He said leaving someone else in charge will be difficult because of how much he has invested.

“It’s like having a child and then just giving your child away to someone else to parent,” he said. “But … change is good and I think ultimately Pullman PD will hopefully continue on the path [it’s] on and continue to improve.”

Jenkins said he feels fortunate to have spent his career doing something he loves and working with people who are committed to making the community better.

“It’s like the saying, ‘If you love your work you don’t work a day in your life’ … for the most part, that’s been my experience,” he said.

Jenkins will stay on as chief until a replacement is hired, he said.