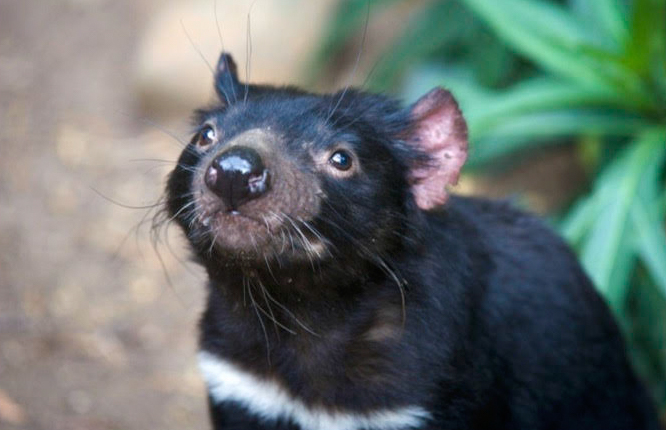 The conservation of Tasmanian devils is crucial as they are one of only a few species consuming bones as part of their diet.

An international collaboration involving researchers from the University of Idaho and WSU is studying transmissible cancers and evolution in Tasmanian devils.

Tasmanian devils are marsupials that are closely related to the now-extinct Tasmanian tiger. They are one of only a few species affected by transmissible cancers, said Paul Hohenlohe, study principal investigator and UI biological sciences associate professor.

Unlike other cancers, transmissible cancers spread directly between individuals when tumor cells of one animal make contact with another, Hohenlohe said. Tasmanian devils can be infected by two types of transmissible cancer. Devil Facial Tumor Disease was discovered in 1996, and another type in 2016.

“Out of a tiny handful [of transmissible cancers] across the whole animal kingdom, devils have two, meaning something is probably making them especially susceptible to this,” he said.

DFTD had a 100 percent fatality rate when it began spreading. Devils usually died within six months of being infected. The species is persisting despite this, and devils will likely not go extinct any time soon, Hohenlohe said.

DFTD spreads through biting, which primarily occurs during mating season, Hohenlohe said. Male devils bite each other when competing for a female, and both sexes bite in the process of mating.

DFTD is not passed from parent to offspring. Devils are not susceptible to the disease until they reach sexual maturity, said Amanda Stahlke, study lead author and USDA Agricultural Research Service computational biologist.

The disease usually spreads from the animal being bitten to the animal doing the biting, Hohenlohe said. As a result, aggressive devils that bite more are more likely to be infected.

“There is some sign that the disease is essentially selecting for less aggressive individuals,” he said. “The genome of Tasmanian devils is evolving in response to the disease.”

Hohenlohe said researchers do not yet have direct evidence in the genomes of devils that the disease is selecting for less aggressive behavior. They are still determining which genes are responding to selection based on DFTD, but it appears some of them are related to immune function.

There are three hypotheses for why devils are vulnerable to DFTD, Stahlke said. Devils bite each other on the face, creating a lot of scar tissue. As tissue regrows, it becomes more susceptible to mutagenesis, or genetic mutations.

Another hypothesis is Tasmanian devils have fragile chromosomes. If chromosomes “jump,” or break and reform in different places, that could lead to cancer-causing mutations, she said.

The species is not genetically diverse, due to a combination of factors, Stahlke said. This means the population as a whole is less likely to evolve in response to environmental factors.

These three hypotheses alone do not explain why Tasmanian devils are susceptible to transmissible cancers in particular, Hohenlohe said.

When DFTD first appeared, some uninfected Tasmanian devils were taken into captivity to preserve the species in case the wild populations went extinct, Hohenlohe said. However, wild populations are not dying out as fast as predicted.

Hohenlohe said researchers hope to address how to manage captive populations and whether they should be reintroduced to the wild.

The conservation of Tasmanian devils is crucial as they are one of only a few species consuming bones as part of their diet. The devils play a unique role in the Tasmanian ecosystem, he said.

“It’s sort of a popular, iconic, charismatic species and a symbol of Tasmania,” Hohenlohe said.