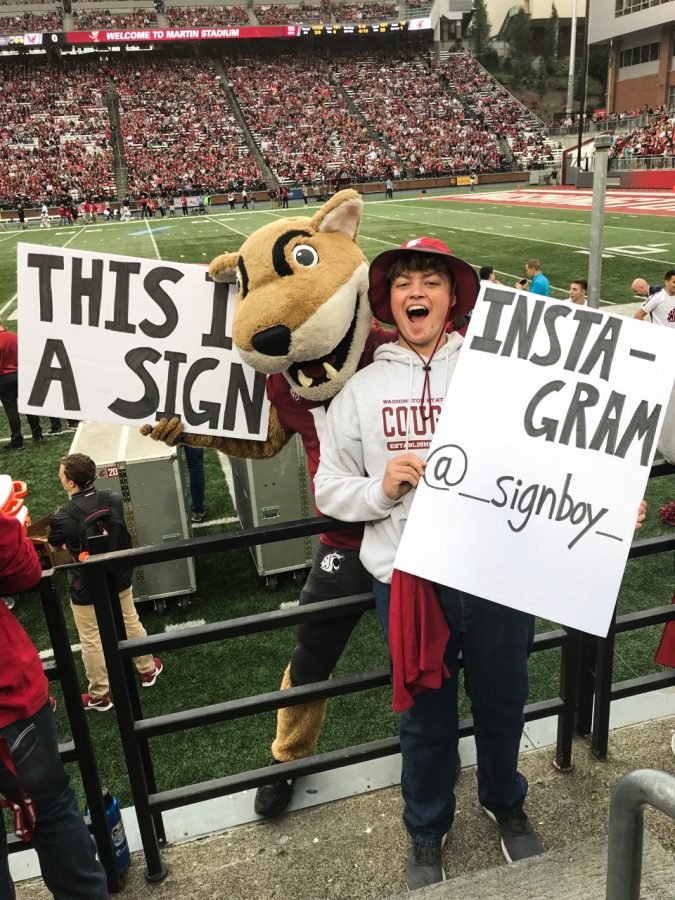 Griffin, shown here, never pictured himself anywhere other than WSU.

WSU alum Parker Griffin is easily recognizable at WSU football games because of his unique signs.

Griffin said he did not want to be just another fan in the stands and always saw people holding signs at games during his freshman year. He decided to get some signs and Expo markers from Walmart to make his signs, and it stuck with him.

Griffin said his friends started to catch on to what he was doing and would stand near him during games and started calling him “Sign Boy.”

“WSU Pullman Advertising started taking photos, and it was a cool way to have all that documented,” he said. “It’s brought joy to a lot of people, so that’s what led me to continue it through all four years of my college experience, except this last one because of COVID.”

Even though Griffin has made multiple signs throughout the past few years, he has not kept any of them, he said.

They are easy to make and would often get destroyed due to bad weather and being shaken up during the games, he said.

“Sometimes I would go to Tin Tan [Tacos] afterward. I would just find a dumpster along the way and just dump them in,” he said. “It’s kind of funny looking back at it.”

“They’re a little more sentimental than ‘yay sports,’” he said.

Griffin said if he had gone to another school, he might not have had as much fun as he did at WSU. Because he was a fifth-generation WSU student, going to another school never really crossed his mind.

Griffin never pictured himself anywhere else because he went to many football games while growing up, and he always had a fun time on campus, he said.

“I don’t think [other schools’] fan bases are nearly as engaging as the Cougar fan base,” he said. “The community here at WSU started that passion to go all out for the football games.”