Center currently working on project to include pronouns on class rosters 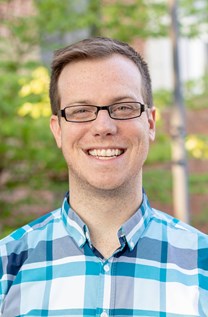 Initially, Jeffries said he did not know what he wanted to do with his life. When he was a resident adviser at Ohio University, he realized how much he loved working with students.

Jeffries said he went to graduate school for higher education in student affairs. He worked as an academic adviser for three years, then applied for the position as GIESORC director when it opened.

“I’ve been doing it for four years now, and every day is just a treat,” he said.

Jeffries said taking the job made sense to him because he has lived on the Palouse for 10 years, and he likes seeing the LGBTQ representation in the area and the state.

“I love the state of Washington because it allows for so much flexibility [and] so much space for discourse,” he said. “I can see how this state is constantly working, and we’re working to make the change. It’s just exciting.”

Jeffries said he wanted to be part of GIESORC because he has always been interested in higher education, but what pushed him to get involved is the lack of LGBTQ centers available to students in the country.

“Two hundred out of 4,000 or so universities and colleges have an LGBTQ center,” he said.

As director, Jeffries hosts one-on-one meetings with students exploring their identity, he said. In the meetings, they discuss what that experience looks like and how faculty can support the student.

Jeffries said he hosts meetings with faculty members who want to show support in their classroom or department.

GIESORC also reaches out to students during Week of Welcome, he said. This upcoming year, the department will reach out to sophomores and incoming freshmen because they did not get a full first-year experience last year.

“They [will] get to know a little bit about being LGBTQ+ here on the Palouse,” he said.

Faculty members in GIESORC recently wrapped up a project they started a couple of years ago on gender inclusion and trans support, Jeffries said.

“What we came through with that project was all new construction and all major renovations at WSU campuses, or even some of our other facilities, have to include a gender-inclusive bathroom in all those buildings,” he said.

Jeffries said GIESORC faculty members are now working on a project to include pronouns on class rosters and Cougar Cards.

GIESORC has engaged with as many people as possible, he said. There are representatives from every WSU campus, the registrar’s office, information technology and the Cougar Card office.

While this project is taking a while to complete, Jeffries said he wants to take the time to gather all the information he needs to complete the task to its full potential.

GIESORC faculty members are discussing what information to include in the system, he said. There is a drop-down list for pronouns online, and they want to make sure they are including everything they need to.

“We’re engaging in those conversations to make sure that we’re not rushing through something that will then not be what we need it to be,” he said.

Jefferies said while he loves being a part of these projects and making a change, his favorite part about his job is the students.

“They keep me humble, and they keep me laughing every day,” Jeffries said.

Jeffries said queer representation looks different now than when it did growing up.

The topics he talks about in his day-to-day life, such as aspects of the LGBTQ community, were not talked about as much when he was a kid, he said.

“The world is so different and renders queer folks in every single TV show,” he said. “Even if it’s a little bit stereotypical, there’s more representation than ever before.”

Jeffries gets his motivation to work so hard because of the lack of queer representation he saw growing up, and he wants to be the person he needed when he was younger, he said.