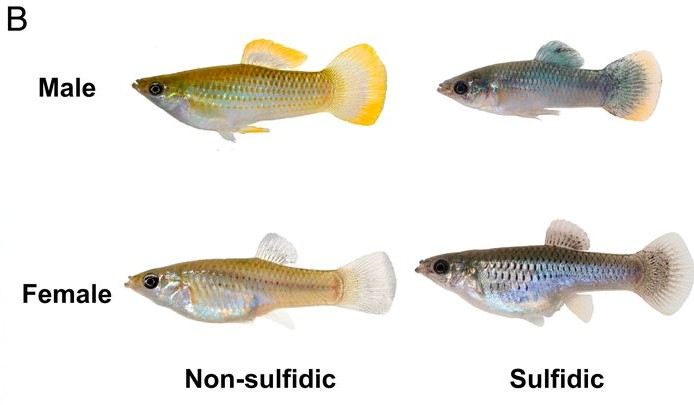 This image, which appears in the study manuscript, shows the physical differences between freshwater and toxin-adapted Atlantic molly. Toxin-adapted fish have larger heads and gills as adaptations to the oxygen-deficient water.

WSU researchers found in a study that epigenetic modifications for fish living in toxic hydrogen sulfide-rich water can last for two generations after being moved to fresh water.

DNA itself — through combinations of four different molecules called base pairs — controls where genes exist. Epigenetic modifications turn genes on and off without changing the DNA base pair sequence, said Joanna Kelley, study co-principal investigator and WSU School of Biological Sciences associate professor.

“Epigenetics are the marks on DNA that are not changes to the DNA [sequence] itself,” Kelley said.

The researchers primarily focused on DNA methylation, which occurs when an enzyme adds a small molecule called a methyl group to the molecules of the DNA strand. Adding this mark causes genes to turn off, or not be expressed, Skinner said.

Epigenetic modifications determine how different cell types develop in an organism, he said. For example, skin cells and eye cells contain the same DNA sequence, but have distinct characteristics because certain genes are turned on or off based on methylation patterns.

“These different populations of Atlantic mollies have adapted to hydrogen sulfide,” she said. “Essentially, nature has done the experiment for us.”

The populations of fish have essentially the same DNA sequence, Skinner said. The epigenetic modifications were the main differences.

“This is a distinct form of inheritance,” he said. “Epigenetics has evolutionarily been put in place to respond to the environment, to give it this plasticity, so the organism has the ability to survive more efficiently in different environments, and that gets passed to subsequent generations.”

About 80 percent of the DNA methylation marks persisted between generations, according to the study.

Hydrogen sulfide-adapted populations have larger heads and gills than freshwater populations to help them access oxygen in the oxygen-deficient water, Kelley said.

In future experiments, Kelley said she hopes to cross both the freshwater and hydrogen sulfide-adapted fish to see how methylation marks persist.