Air conditioning units are on everyone's Christmas list this year, but Pullman buildings should require them 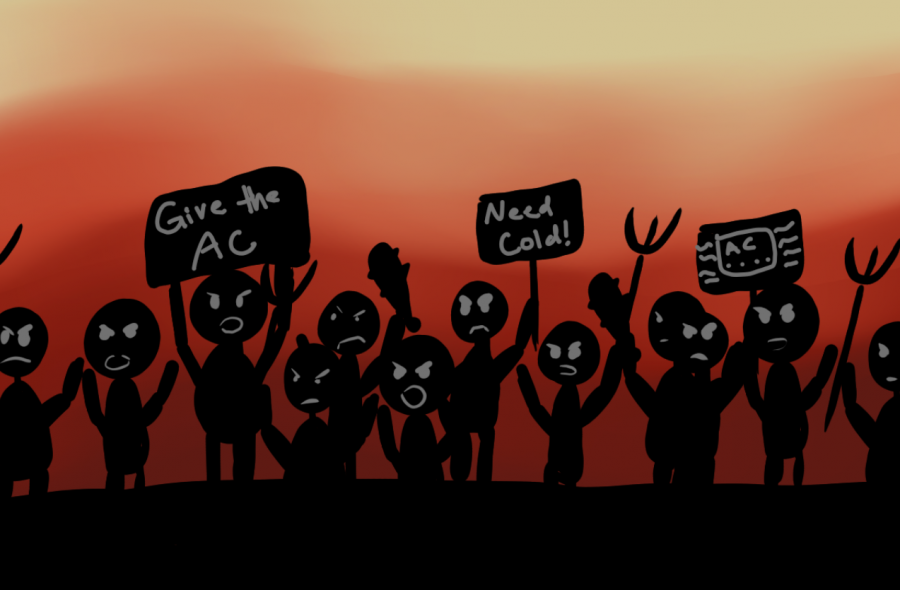 Pullman residents are coming together across the city to demand air conditioning units. No one should have to make do with fans in the boiling heat.

Pullman has gone up in flames. And how ironic, because we are all finally recovering from the heat wave that just passed through.

The young and old alike suffered through unrelenting heat and now from the long-lasting effects of a lack of air conditioning in their homes and apartments. Today they are rioting in the streets.

The only thing that kept them from doing so last week was the triple-digit temperatures and a shortage of water bottles from Dissmore’s IGA.

From Main Street to Stadium Way, year-round residents and students are marching for a change. They are pushing wheelchairs for the elderly and providing pitchforks and bullhorns for the enraged — all the while stopping for a blast of air conditioning at any open store along the way.

If only to keep our rioting residents safe from heatstroke, the city needs to mandate air conditioning in each and every apartment, home and residence hall in Pullman.

Sweetie Jo Sweat, a mother of four and long-time resident of Pullman, has had enough of carrying a baby  and a handheld fan from May to September.

“You wouldn’t believe the biceps I have developed over the years,” Sweat said. “As the heat rises, the size of my handheld fan is growing. I can’t manage for much longer. Even with extra gym time at night.”

No parent should have to escape to lift weights once their kids are tucked in solely to ensure their body can carry a portable air conditioning unit and their four-year-old.

Businesses are seeing the effects, too. But in the worst way.

Their employees, unable to stand the heat, call out of work every morning to escape to the Dunes or the Cliffs. Pullmanites of all ages and job titles are willing to lose their jobs, if only for a moment of sweet relief in the freezing Snake River.

Jack Jackson, a 10-year employee at Pullman Building Supply, said the trip to the river was hardly even worth it anymore.

“With so many of us at the river at once, the water’s temperature has risen to be the same as the air. It’s mind-boggling and infuriating, but this is what we’re dealing with now,” Jackson said.

Jackson’s boss, Karry Koats, was seen amid her employees at the Cliffs as well, both hands carrying freezing cold ice packs and both feet in the river. No one is immune to the call of cold.

Pullman residents cannot take it anymore. When they are not spending their days submerged in now-lukewarm river water, they are demanding change in the procession which has now officially brought all work to a halt in town.

Walmart does not have room in its parking lot for more demonstrators. And they are running out of water to give them.

When everyone is affected, no one can ignore the issue.

“We will drink every water bottle in this town before we stop,” Sweat said. “Something has to change or people are going to start building their houses underwater if only to escape this horrible heat. I can’t sweat one more drop. It will kill me.”

And she is not alone. Pullman has to make a change for the health of their residents, or more of us will take to the streets to join Sweat and hold our pitchforks high — with our handheld fans close.