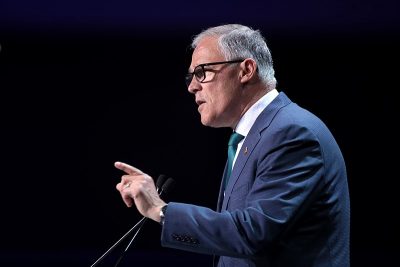 Gov. Inslee declared a wildfire state of emergency on July 6 as the risk of wildfires steadily rose.

Gov. Jay Inslee declared a drought emergency for the majority of the state on Wednesday.

Seattle, Tacoma and Everett metropolitan areas are the only places excluded, according to a Washington State Department of Ecology news release.

The Center for Environmental Law and Policy urges everyone, including those in exempted areas, to do their part in conserving water, according to a CELP newsletter.

“Extreme drought conditions leave communities across our state at risk as fire danger continues to climb,” wrote Hilary Franz, Washington commissioner of public lands, in the newsletter. “I’m asking everyone to do their part and take precautions to prevent wildfires.”

CELP curated a list of ways to reduce a person’s water consumption.

Inslee declared a wildfire state of emergency on July 6 as the risk of wildfires steadily rose. The state of emergency is statewide and includes a ban on outdoor and agricultural burning until noon on Sept. 30, according to a newsletter from Inslee.

Exceptions to the ban include gas-fueled stoves and small fires on personal property. The order does not supersede more restrictive regulations put in place by local authorities, according to the newsletter.