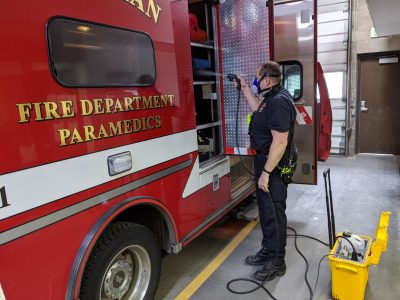 “The ground conditions are exactly where they need to be at when lightning strikes,” Scharnhorst said.

The Lick Creek Fire is about 28 miles southwest of Clarkston. It is believed to have started on July 7 as a result of a dry lightning storm, according to the Incident Information System website.

The Lick Creek Fire has burned approximately 68,000 acres of land. Fourteen crews are on scene and have contained around 40 percent of the fire, according to the website.

The Clarkston Fire Department is not active on the scene, but if it gets larger or if there is a need for more resources, the department could join the effort, CFD acting captain Jared Lutes said.

“Right now there’s no evacuation plans in place for anywhere in the city,” Lutes said. “Whenever there’s a big fire incident like this, the state has taken it over.”

CFD has a Red Flag Warning task force that is always prepared to be on the scene of fires that could reach wildfire status, he said. Red Flag Warnings are days of caution for abnormally dry conditions and potential wildfire risk.

The Green Ridge Fire, 102 miles from Clarkston, started on July 7 from a lightning strike as well. The fire has burned over 1,000 acres and is now 15 percent contained, according to the website.

PFD is also on call to fight any large wildfires. Scharnhorst said last week the department was helping to fight the Bruler Fire in Linn County, Oregon.

“Summer is here, it means the farmers are in the fields,” he said. “Drought conditions that we have, there’s always fires coming, you know, we put heavy hot equipment into dry dry fields.”

Other big fires in the area such as the Andrus Fire and the Silcott Fire are 100 percent contained.