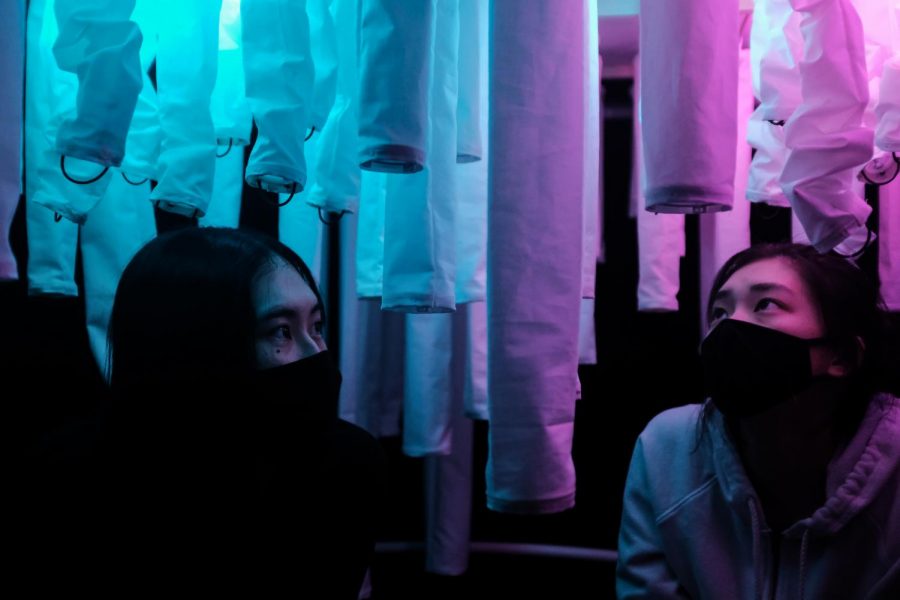 Wisteria is built with hanging fabric shrouds that can change colors and overall shape to best respond to data received from the watch.

Wisteria, a WSU-led project, was announced as a finalist and popular choice winner of the Architizer A+ Award in the Architecture and New Technology category.

Mona Ghandi, School of Design and Construction assistant professor, led a team of seven individuals. She said they created an immersive prototype of an environment reacting to its inhabitants.

“Using new technology is inevitable these days,” Ghandi said. “For me, as an architect, I have always had this question: how can architecture be more interactive with human life and the human body? How can it be more than just a fixed space?”

Ghandi’s ideas led to the creation of Wisteria. Wisteria uses data including body temperature, skin electricity and heart rate from a smartwatch to determine the most suitable environment for the user, she said.

Wisteria is built with hanging fabric shrouds that can change colors and overall shape to best respond to data received from the watch, Ghandi said.

“If you felt stressed, the color would change to blue,” she said. “The shrouds shrink to open up the space so that you can have more space and calming colors in order to help you feel better.”

Ghandi said she believes the technology could help individuals with autism as well. Wisteria’s design could help people express emotions they may not have otherwise been able to by acting as a medium between them and their caretaker.

“Most of the projects, even within our category, are fully built, inhabited buildings,” said project director Mohammed Ismail. “I think ours stands out in that it’s purely a prototype … I think it’s a pretty cool achievement for us to win an award without having to actually build the full-scale project.”

Seven people worked on the project despite not being able to regularly participate in the lab together. The team planned the project prior to regaining access to facilities and was able to carry out the project smoothly, Ismail said.

Ghandi said she hopes winning the award allows for further funding and to see a full-scale model of the project in museums soon.

She believes the project demonstrates the value of interdisciplinary work at the university and hopes to see it continue in other departments.

“It is very valuable to our school,” she said, “to see how an interdisciplinary approach can offer and open up your eyes to a new potential you may not have been able to perform with just one discipline.”