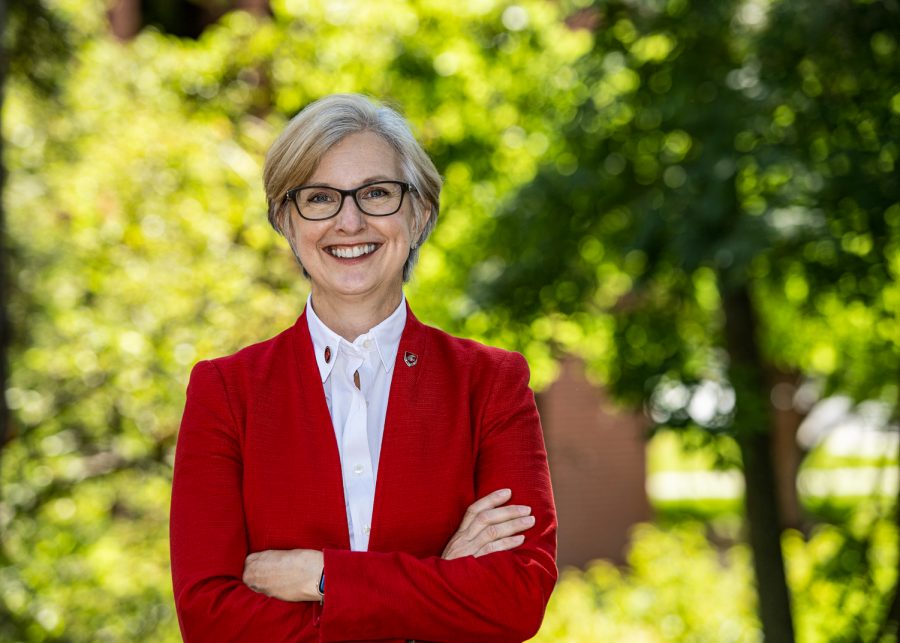 Before being hired as WSU’s Pullman Chancellor, Elizabeth Chilton said she had never been to Eastern Washington.

Having a Pullman Chancellor is part of the implementation of OneWSU, and will help provide clarity of job descriptions, roles and responsibilities of university administration, Chilton said.

Chilton grew up in New York state and said she spent most of her professional life at University of Massachusetts before transitioning to Binghamton University in New York to work as a dean of arts and sciences.

During her time at Binghamton, Chilton said the search firm in charge of helping WSU find a provost reached out to her. Chilton started the interview process for the role in the spring of 2020, all of which was done remotely because of the pandemic.

Before her hiring, Chilton said she had never been to Eastern Washington.

“My husband and I, and my son and our two large dogs, felt like this was a great opportunity, and we moved here just about over a year ago and have not regretted it one moment,” she said.

Currently, Chilton said she is responsible for overseeing the university’s academic mission. This includes working with the Board of Regents on new degree programs and university deans on faculty hiring and curriculum development.

WSU President Kirk Schulz said as the university system expands, he feels it is important to have a leader looking out specifically for Pullman students and faculty members.

Schulz said each WSU campus has different needs. OneWSU will allow each campus more autonomy to dial in their degree programs to its respective community.

Despite the increased autonomy, Schulz said it is still important to recognize that everybody is part of the WSU family — something that is exemplified by the fact that all degrees received at any location still say WSU, not a specific campus.

“Our faculty are really all part of the same academic unit across all of our campuses,” he said. “Those were things that have been here for over 30 years, and we want to make sure we continued with those traditions.”

Before the decision to create the chancellor role, Schulz worked as the de facto Pullman chancellor on top of his presidential role, something he said is difficult to maintain as university aspirations grow.

Schulz said there are many events in Pullman he cannot attend because he is often fundraising, out of state or at a different campus.

“I kind of felt that sometimes Pullman was neglected in terms of my presence at different events,” he said, “or my ability to interact with students, faculty and staff the way that people should expect the campus leadership to be able to do.”

Having Chilton as chancellor will allow Schulz to bring more resources into WSU and help him not feel pulled in so many different directions. He said the new role will also allow the Pullman community to have somebody at local events who will provide leadership.

Chilton said the Pullman campus should have its own focus and operations while still maintaining its flagship position.

While being an integrated system is a strength, Chilton said over time, the model has not allowed campuses to truly focus on what their community needs specific to their location.

“We’ve never really asked that question,” she said. “What specific kinds of programs would help Pullman students succeed? I think we really need to be a little bit more place-based in thinking about how we support student success.”

“There has always been this tension between wanting to remain strong as a system and wanting to serve local students and communities and faculties in the state of Washington,” she said.

Other WSU campuses have a series of vice-chancellors, something that is missing in Pullman, Chilton said.

To rectify the gap, Chilton said several leaders of Athletics, International Programs, Research and Student Affairs will now add vice-chancellor to their job title and report to her.

Schulz said although he believes there will be tangible benefits to having a Pullman Chancellor, changes will come gradually and not be something people notice overnight.

Chilton will retain her provost position after assuming the chancellor role. She said until they are a year or two into the implementation of having a chancellor, they will not fully understand the impacts the role will have on the university’s academic missions, policies and procedures.

“It might work really well, or in a year or two, we may say, you know, this is too complicated,” she said.

Chilton said she is excited for the fall semester and the opportunity to meet more students, faculty members and staff so she can understand how to best serve them.

“I really am looking forward to seeing the campus come alive,” she said. “While I’m sure it will be enormously challenging to sort of carve out the role, it’s really an amazing opportunity, and I’m just so grateful for it.”