How to be hot but not on fire: a guide to fire safety 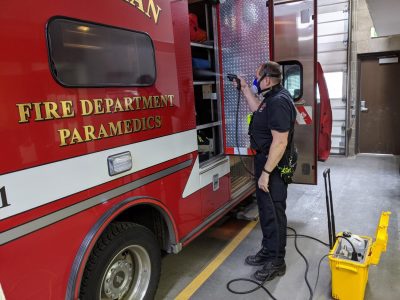 Wildfire season has not been kind to Southeastern Washington and Northern Idaho this summer. Naturally-caused wildfires are still burning through the two bordering states, but human-caused fires pose a greater threat to Pullman and surrounding towns.

The number one goal for practicing fire safety is to prevent any fire that can be prevented, said Tony Nuttman, deputy fire marshal for the Pullman Fire Department.

Being self-aware is the first and easiest step to fire safety. Nuttman said the fire department responds to a lot of cooking-related emergencies — most of which could have been prevented if the people involved were more attentive.

“They’ll start cooking food on the stove, they’ll turn the grease on high, then walk out,” he said. “Don’t leave if you’re cooking something.”

If someone does need to leave, even for a short amount of time, they should turn off the stove and remove the pot or pan to an unheated burner.

Nuttman said he has seen cooking fires take out an entire room, but sometimes they can be extinguished fast enough that no damage is caused.

He said it is also important to distinguish whether a cooking fire is a grease fire or a normal fire.

“Don’t ever use water on a grease fire,” he said.

If a grease fire is small enough, it can be extinguished by taking the pot or pan off the burner and covering it with a lid so the flames are suffocated — but only if it is safe to do so. A fire extinguisher can also be used on a grease fire.

Along with being attentive, people should always have a fire extinguisher in their home and have working smoke and carbon monoxide detectors.

“The smoke is going to kill you first,” he said.

Nuttman said he has been in several houses where residents have taken the batteries out of their detectors or removed them completely. In Pullman, there are no regulations that demand homeowners or residents to have working detectors.

However, he said having working detectors will greatly improve a person’s chance of escaping a fire or having minimal damage caused to their belongings.

Improperly discarding cigarette butts is also a common cause for fires in the Pullman area. Nuttman said he recommends people dispose of cigarettes, and other smoking butts, in a metal can filled with water.

He said he knows small tins filled with sand is a popular disposal method, but still burning embers can be easily picked up by the wind, especially with Pullman’s weather conditions, which can ignite a fire.

On Aug. 8, an improperly disposed marajuana joint caused a major house fire on Maple Street. Embers from the house were carried by the wind and ignited another house on Howard Street. Both houses were declared inhabitable after the fires.

Nuttman said there are only about three or four major fires in Pullman every year.

House fires in Pullman can also be caused by candles, which is one reason why candles are not allowed in many congregate living places, like dorms or Greek housing, Nuttman said.

He said he also sees some electrical fires caused by overloading power outlets.

“Those power strips are only good for so many amps,” he said. “When you overload those … it can cause a fire.”

Nuttman said people should always be prepared in the case of an emergency. This includes being aware of at least two exit points in a house and having a go-bag packed just in case.

Having renter’s insurance is also a must, he said, as it covers not only fires but most house-related disasters.

“Renter’s insurance,” Nuttman said. “That should be underlined in bold red highlight and circled.”

Nuttman has responded to several fires where residents don’t have renter’s insurance.

“If you’re renting in the city of Pullman, please get renters insurance,” he said.

Nuttman said people should call 911 in every instance of a fire, so the fire department can ensure the fire has been properly extinguished.