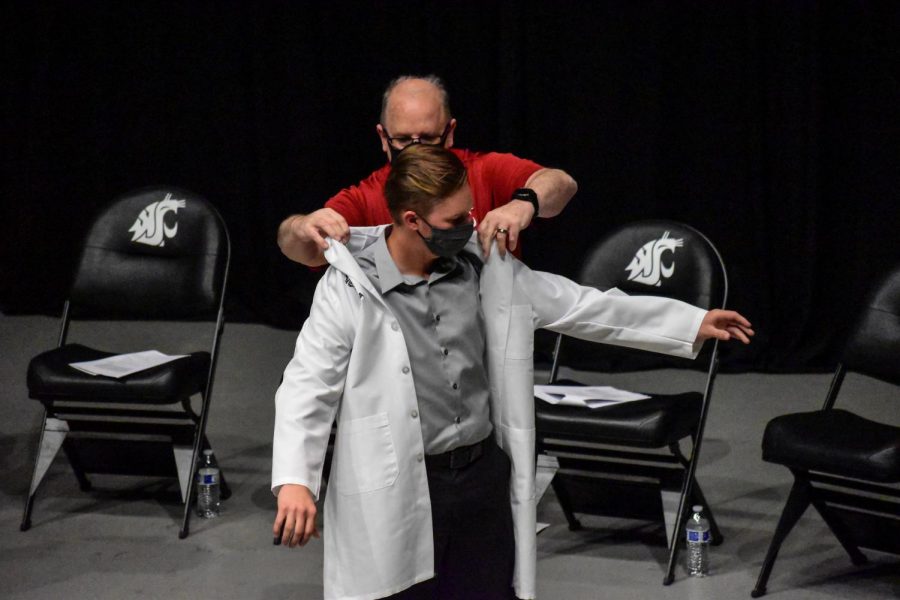 Since 1999, the College of Veterinary Medicine has been welcoming new students with this ceremony where students receive their clinical white coats and recite the veterinarian’s oath. Charlie Powell, College of Veterinary Medicine senior public information officer, said the ceremony functions as a formal welcoming to the profession while emphasizing the symbolic importance of the white coat.

Dr. Arnold Gold at Columbia University originally started the White Coat Ceremony in 1993. Gold believed that medical students should be administered the Hippocratic Oath when they first start training for the profession, rather than after completing their education, as was common at the time.

“His thought was, we should be administering the oath to them the first day that they get here because any information they get, or anything else, is just as confidential today as it will be four years from now when they graduate,” Powell said. “Their responsibilities as a professional will have to be exactly the same too. So let’s start them out by enjoining them into the profession and making it clear that we are their mentors, but we are also here to make them our peers.”

WSU became the first veterinary program to adopt the practice in 1999 when Dr. Gil Burns, who was associate dean at the time, brought the ceremony to Pullman. This year’s ceremony was held in a hybrid format, so supporters from out of state could watch through a livestream on Youtube.

Jace Enwards was one of over 100 students honored during the ceremony in Beasley Coliseum on Thursday. Over 250 parents, grandparents and friends watched as their loved ones took this next step toward a career in veterinary medicine.

Enwards is a Washington resident who landed in Pullman after finishing his undergraduate degree in microbiology at Montana State University. He said having the white coat placed on his shoulders was a monumental moment for him and his peers.

“Your entire first four years, everything you’re doing is with the intention of applying,” he said. “So the white coat ceremony is like, everything has paid off. They put that coat on you and you’re just like, ‘Oh, I’ve done it; I’m actually where I want to be.’”

Enwards grew up in the rural community of Goldendale, Washington, and hopes to open his own clinic in a similar rural community after completing his education. He said he appreciates the sense of community a small town provides and wants to serve both ranchers and pet owners.

Siena Mowrer is another member of the class of 2025 recognized at Thursday’s ceremony. She grew up in New Mexico and finished her bachelor’s degree in animal sciences at New Mexico State University. She applied to eight veterinary science programs but decided on WSU for the support and sense of community the program provides.

“I was just one of those kids that wanted to be a vet since I was 4,” Mowrer said. “My mom always got me little vet medicine books for kids and stuff like that, and then I started shadowing when I was in high school and figured out that it was really what I wanted to do.”

Mowrer said she is proud to be one of the many women entering the field of veterinary medicine. The class of 2025 is predominantly female, as are most veterinarians in the U.S. There are several theories as to why that is, but Powell pointed out none of the theories hold up under closer examination.