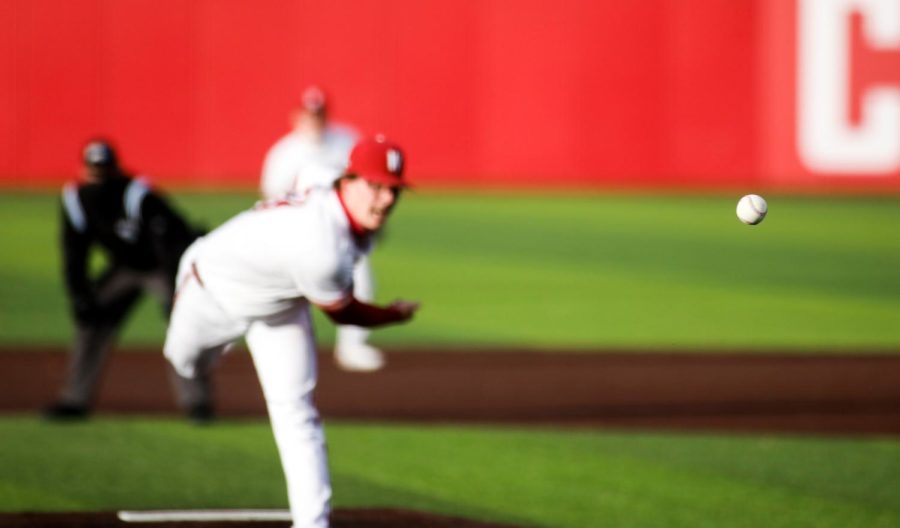 Then-junior pitcher Zane Mills throws the ball during the game against Seattle U on March 5, 2021 at Bailey-Brayton Field.

With a handful of Cougars playing in some part of an MLB team’s farm system, now is as good a time as any to look over some of the top-performing WSU alumni from this past week.

In the major leagues, Adam Conley put up some solid performances for the Tampa Bay Rays. Conley spent three years as a Coug from 2009-11. This week, Conley made three appearances for the Rays, pitched 2.2 innings, struck out two and gave up just one run on a Ramon Urias solo home run with two outs in the ninth.

Leading the way was a former major leaguer in Ian Hamilton. Hamilton was in Pullman from 2014-16. This past week, Hamilton made three appearances out of the bullpen for the Triple-A St. Paul Saints, racking up 5.1 innings pitched, allowing no runs and just one hit, while striking out seven across those appearances. He would be credited with the victory in the Aug. 17 meeting against Iowa Cubs and got the save in an Aug. 21 meeting against the same club.

Going down to High-A ball in North Carolina, Andres Alvarez put on a show in one appearance for the Greensboro Grasshoppers. Alvarez was a Coug from 2017-19. In his one appearance this week, Alvarez started at third base against the Bowling Green Hot Rods. He would get four plate appearances, tallying a perfect three-for-three day with a double, two runs batted in, two runs scored and a walk drawn.

Last year’s ace on the mound for WSU, Zane Mills, made his pro debut this week with two appearances for the St. Louis Cardinals’ Florida Complex League team. Mills would pitch a combined two innings, giving up just one hit and one run while striking out two. He would hold his opponents to just a .167 batting average in those appearances from the bullpen.

Taylor Williams made two appearances out of the bullpen for the El Paso Chihuahuas. Williams is currently pitching for the Triple-A affiliate of WSU as part of a rehab assignment following a right knee injury in early April. Williams spent just his freshman year at WSU before transferring. In his two appearances out of the bullpen this week, Williams recorded 3.2 innings pitched, gave up two hits and two runs, while striking out three. Both runs came on a home run from Reno Aces outfielder Henry Ramos in the fifth inning of a 12-11 El Paso win.

Another former Coug who transferred, Ky Bush, made his pro debut this week, as well. Bush was selected in the second round of this year’s MLB Draft out of St. Mary’s by the Los Angeles Angels. Bush spent his freshman season of 2019 in Pullman. Bush would make two starts for the High-A Tri-City Dust Devils, one against the Spokane Indians and one against the Vancouver Canadiens. It was not the best of debuts for Bush, who pitched just a combined 3.1 innings, gave up five hits, two walks and a run. The bright side comes from his punchouts and general ability to get guys out. Bush struck out eight. He did not get a ton of help behind him, as opponents were hitting a whopping .714 off of balls in play but just .333 overall.

Damon Jones spent 2016 and 2017 as a member of the Cougar baseball team, before being drafted by the Philadelphia Phillies following his redshirt-junior season. On Aug. 10 of this season, Jones made his MLB debut. It was a short-lived stint, however, as Jones is once again pitching for the Phillies’ Triple-A affiliate, the Lehigh Valley IronPigs. This past week, Jones came out of the bullpen twice, accumulating three innings of work, while giving up three hits, a run and recording four strikeouts.

Last season’s star on the Palouse, Kyle Manzardo, made two appearances for Tampa Bay’s FCL team. In those appearances, Manzardo went two-for-five and snagged his second professional double and his first professional RBI of his career. Manzardo would also score following that double. Manzardo would round out his stat line for the week with a walk drawn and a pair of strikeouts.

Shane Matheny, a Coug from 2015-17, tallied his third home run of the season while playing for the San Fransisco Giants’ Double-A team, the Richmond Flying Squirrels. Outside of that fifth-inning home run against the Erie SeaWolves, it was not the best of weeks for Matheny. The infielder would record just the one hit in seven at-bats but would also score following his lone drawn walk of the week. So, to be an optimist, both times he got on base he scored.

A member of the WSU baseball team from 2012-14, Nick Tanielu is currently playing with Williams in El Paso. This week, Tanielu made three appearances for the Chihuahuas, earning himself two hits in ten at-bats, a run and two walks. One of his two hits would be a double against the Round Rock Express.

A.J. Block, a WSU pitcher from 2017-20, did not have the best of weeks. Block, who is currently pitching for the Kansas City Royals’ High-A affiliate, made just one start this week. In that start for the Quad Cities River Bandits, Block pitched four innings, gave up five hits and four runs and walked two batters. On the bright side, he was not giving up the long ball, only allowing one home run in the loss. He also struck out five batters in the appearance.

Another player who spent just his freshman season at WSU, Tyson Guerrero made two appearances for the Kansas City Royals’ Arizona Complex League team. These were just appearances three and four for Guerrero, who was drafted from the Washington Huskies this season. In those two appearances, he pitched a combined four innings, gave up four hits, two runs and four walks. However, Guerrero also avoided giving up any home runs and struck out six across those two games.

Ian Sagdal, a Cougar infielder from 2012-15, made four appearances this week for the Harrisburg Senators, the Double-A affiliate of the Washington Nationals. Sagdal recorded two hits in 15 at-bats, struck out twice and added a sacrifice bunt to his line.

A pitcher for WSU from 2015-18, Ryan Walker had a so-so week out of the bullpen for the Eugene Emeralds. In two appearances against the Everett AquaSox, Walker pitched 2.2 innings, gave up three hits, two runs, a walk and struck out three. Despite this, the Emeralds were able to take a victory in both games. The vast majority of the damage to Walker’s stats comes from the Aug. 18 meeting with Everett. In that game, he would give up two runs, including one on a home run, in the eighth and ninth innings. However, he would close out the game in the ninth and earn his team a 6-3 victory.