Run-in with Pullman Police led to marriage for WSU alums 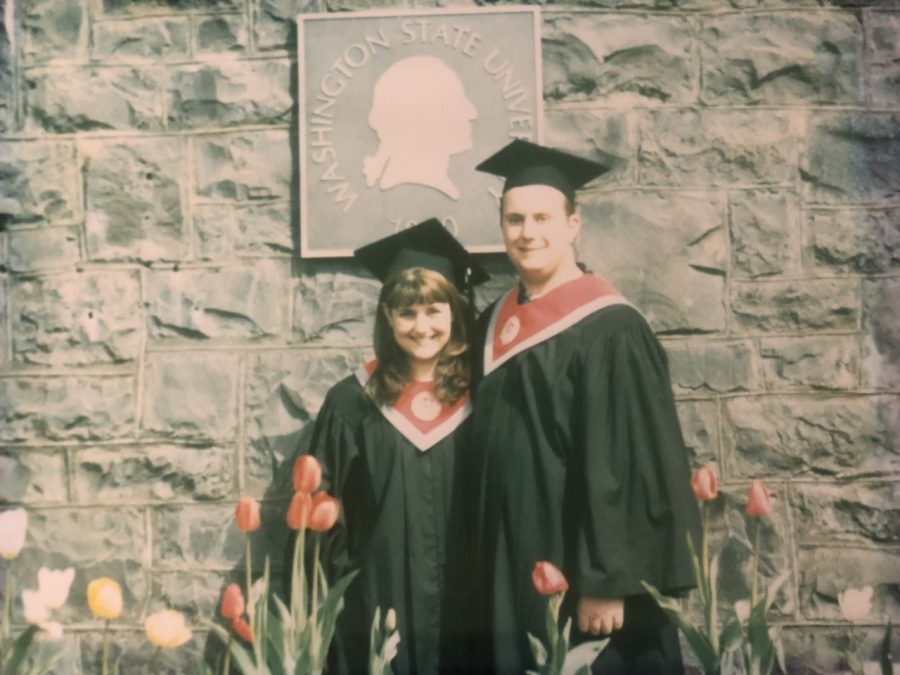 Former Cougs Rich and Tory Johnson, pictured here on their graduation day, married over 20 years ago.

Many incoming freshmen choose WSU for its sense of community. Not only do people make lifelong friends while attending WSU, but some people find the love of their life.

WSU alum Rich Johnson met his wife, Tory Johnson, during the spring of their freshman year in the Stevenson South dorm.

Tory said her friend had a crush on Rich’s roommate at the time. So the two of them would go up to the sixth floor, where he lived, to intentionally run into him.

“I was just supposed to be the wingman,” Tory said. “Nothing ever came of the two of them at all, but I got stuck [with Rich].”

After developing a friendshipfor a couple of months, Tory and Rich eventually started dating in April 1996.

Tory said their first date was at a restaurant called Swilly’s in downtown Pullman, in the building where Porch Light Pizza currently is. The couple did not have a car on campus that year, so they had to borrow one from a friend.

Rich drove Tory up to the WSU water tower off campus and parked. At the time, the spot was notorious for attracting young lovers on date nights. Tory said she thought they were just going for a joyride until Pullman Police officers showed up.

“We went up some hill, and the cops turned the flashing lights on and pulled us over,” she said. “They said, ‘You kids need to get out of here,’ and I was like, ‘What did we do?’”

From that point forward, the couple always found humor within their relationship, which manifested in the pranks they pulled on each other.

One time, Tory and the girls on her floor took all of the feminine products they could find to the sixth floor where Rich and his roommate lived. They stuck all the products to Rich’s door with a sign that said: “Welcome to the maxi pad.”

Tory said one of her lasting memories of that year took place in Orton Hall, where their friends convinced their resident adviser to turn up the heat as high as possible in the middle of winter.

“We had a luau in the hallways,” she said. “Everyone was in hula skirts and coconut bras and tank tops and it was snowing outside. It was like 20 degrees outside, but it was 90 degrees in Orton and we were all partying.”

Rich and Tory now have two kids and have been married for 21 years.