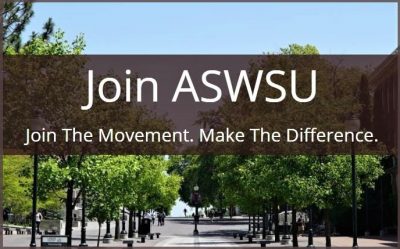 More information on open ASWSU positions can be found on its website.

Gerlach said she hopes to strengthen ASWSU’s relationship with multicultural and minority communities while also collaborating with the university’s transportation department to work on new walkways, bike lanes and bus routes.

Ella Kisor, sophomore international business and Spanish major, was unanimously elected as director of academic affairs. Kisor said her goal is to make students feel comfortable in the classroom with their professors and when seeking academic help.

Kisor said she is excited to get more involved on campus and hopes to help others from feeling lonely. She plans to work with tutoring centers around campus and help students find specialized tutoring offered by their college as well.

Margeaux Edwards, senior psychology and neuroscience major, was elected as director of student affairs. She said she hopes to use her insight to provide new ideas for the university.

“I am especially passionate about the student’s wellbeing,” she said. “An overarching goal of mine is to increase university efforts in normalizing communication surrounding mental health within the WSU community.”

Hernandez wants to see more culturally-diverse food options in the dining hall. She said having food that students are used to would help make them feel more at home and ease the culture shock of entering the college atmosphere.

“Being a part of student government is not only about using your voice to make change,” she said, “but also giving others the chance to use theirs.”

Kim emphasized the importance of a clean environment. He said one of his goals is to get involved with other organizations on campus rather than relying on others to reach out to ASWSU.

Kim said he believes his positive attitude makes him a good fit to help bring freshmen voices for student government.

Junior transfer student Adilene Isordia Ramos was elected as one of the four undeclared senator positions. Isordia Ramos said she hopes to use her background in student government to help uplift and improve ASWSU.

Isordia Ramos said she is going to keep the student’s best intentions in mind and hopes to make more connections during her first year on campus. The other three undeclared senator positions are vacant for now.

More information on open ASWSU positions can be found here.