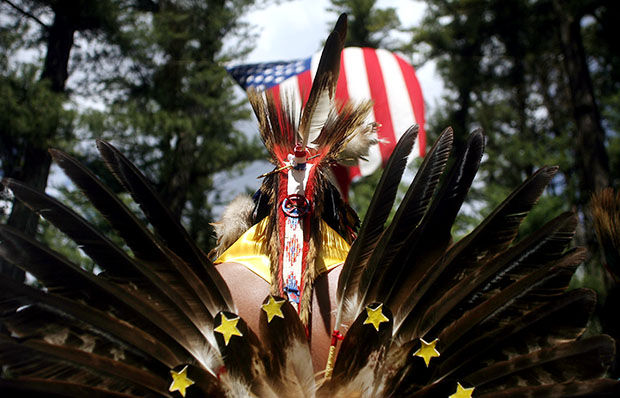 Greg Urquhart and Matthew Hale began conducting the survey online and through mail-ins in November of 2013. It took more than year to complete.

Hale, who was a mental technician in the U.S. Air Force, witnessed the lack of effectiveness of veterans’ mental health services for Native Americans.

“I’m well aware that the mental health field in the military is a difficult one and I got to see that firsthand being on the side that was trying to give help and getting blocked in a number of areas,” Hale said. “So we find that exploring things like perceptions of PTSD, that is, clarifying things like seeking treatment and what are the barriers to treatment, we think it’s a very salient topic to explore.”

Hale and Urquhart are both veterans of the Second Gulf War.

“In the general vet population, the PTSD rate is mostly between five and 17 percent,” Urquhart said. “However, amongst the native population, specifically with certain Plains tribes, the PTSD number can range upwards to 50 percent.”

Despite these statistics and prior to Hale and Urquhart’s research, there was no information available on what works and what doesn’t in terms of treatment for Native American veterans.

“We don’t know, I mean, really don’t have any idea what the attitudes, beliefs and perceptions are of Native American veterans toward PTSD,” Hale said. “It makes it hard to even treat these individuals or know how to.”

This lack of information inspired Urquhart and Hale to conduct the first survey to actively look at what treatments had discouraged veterans from in the past, what treatments they had tried and which they preferred.

Respondents selected that they would prefer treatment groups to only be composed of veterans at a much higher rate than if the groups were composed of Native American veterans.

“We’re speculating here, but what we think is going on is that there’s a tendency in the general population that you can either identify as a veteran or identify as a Native American, but not both,” Hale said.

The high response rate on this question indicated it’s an important issue for Native American vets, according to Hale.

“There’s an identification with both cultures, but it may not be socially acceptable for them to endorse both cultures, so that’s something that we recognize that should be explored further,” Hale said.

Urquhart and Hale vetted their survey for cultural sensitivity through the Plateau Center.

“A lot of our participants reported having negative experiences at the VA (Veteran’s Affairs) either because of a lack of cultural awareness of traditions and beliefs, or because most of the treatment models fit a more western model,” Urquhart said.

Western psychological therapies are based on the concept of mind-body dualism. This can be problematic for native veterans, according to Urquhart.

“Basically, it holds that the mind is separate from the body, whereas most Native Americans —especially those that follow a traditional cultural approach — believe that the mind, body and spirit, all those are connected. There is no parceling out one segment or another,” Urquhart said. “So, a lot of these western-based treatments don’t fit their world, and actively, in one way or another, negate it.”

The survey was sponsored by Phyllis Erdman, the executive associate dean for academic affairs.

“I thought this would be a great opportunity to understand what (Native American veterans) needs are and for us to try to respond to that in the best way we can,” Erdman said.

According to the study, 75 percent of respondents indicated there is not enough health care available to them.

“Basically, they said that the treatments that are available didn’t work, were culturally insensitive- that was a common theme,” Urquhart said. “I think the VA has started addressing that a little more seriously in the last few years, but some of these veterans are from Vietnam and for them the damage has already been done.”

Another problem Native American veterans face is access to care facilities like the VA and Indian Health Services. Many reservations are in rural areas, which can prevent veterans from receiving treatment.

“In terms of treatment preferences, traditional spiritual treatment and equine therapy came up as strongly supported,” Urquhart said. “It’s a Native American world view that everything has a spirit, animals have a spirit, the rock has a spirit, and so equine or animal therapy isn’t a Western based therapy, and therefore it’s closer in line with their views.”

Erdman researches human-animal interaction, specifically the effectiveness of equines in learning and therapy.

“It doesn’t surprise me that anyone responds favorably to equine therapy, because I think they see it as providing an opportunity that talk therapy and things like that just don’t do, they just don’t provide what it is they’re looking for,” Erdman said.

By and large, traditional therapies were preferred by respondents, though a portion favored one-on-one therapy.

“I think it accurately captures the general consensus among the Native American community,” Urquhart said. “We had 600 respondents which were a combination from over 175 distinct tribal affiliations.”

For Hale and Urquhart, aiding Native Americans is the main goal of their survey.

“Too much stuff in the past has sat in the ivory tower of academia, where it was just done so that someone could get tenured somewhere, and doesn’t go back to the people in order to help them out,” Urquhart said. “What we plan to do is distribute the information from the survey free of charge to all tribal nations and veterans’ service organizations.”

Urquhart and Hale plan to begin sending the compiled information to tribes during the upcoming summer. Additionally, they plan to present a portion of the information at the Globalization Conference in Spokane at the end of the month.