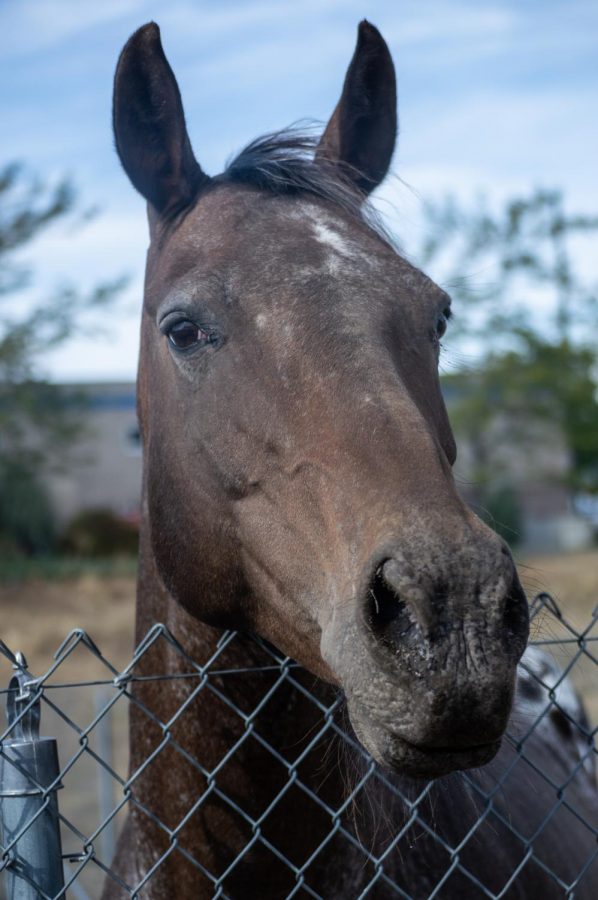 Nikki (“Spot Me One”) the Appaloosa, owned by Lucy Samuels, in her pasture behind the museum.

It’s 1700, and the first horses are just beginning to set hoof in the rolling grasslands of the Pacific Northwest. First brought to the New World by the Spanish 200 years prior, horses spread across the Americas through trades, raids and escapes. The Palouse soon gave rise to an entirely new breed: the Appaloosa.

Thompson got her first Appaloosa when she was 13 years old and has been involved with the breed ever since.

Appaloosas are characterized by and prized for their spotted and speckled coats. These pied coats are caused by the leopard complex gene, LP, which has been traced back 40,000 years to some of the earliest horses.

“It may have actually been the first color,” Thompson said.

There are, of course, exceptions; about one-third of Appaloosas’ coats are solid, despite carrying the LP gene. LP also causes vertical striping on most Appaloosas’ hooves and mottled skin, especially around the muzzle and eyes.

Unfortunately, it does not always just lead to pretty patterns. Appaloosas are eight times more likely to develop eye diseases like equine uveitis and congenital stationary night blindness than horses lacking the LP mutation. Despite the threats the gene responsible for such desired patterns may pose, today spotted coats are the breed standard.

Curiously, Appaloosas were not always bred for their spots. Many native tribes utilized the arrival of the horse, including the Cheyenne and Apache. In the Pacific Northwest, no tribes did so more impressively than the Nez Perce and Palouse. They first adopted the horse for transport, which revolutionized their range and hunting techniques. By the late 1700s, the Nez Perce and Palouse were breeding horses for favorable traits like intelligence and health, not for color.

“What they picked was the best horse, the best stallion,” Thompson said.

They were meticulous, gelding (neutering) stallions with undesirable qualities so such traits would not be passed on. The bloodlines they cultivated, of which only about 10 percent were pied, produced fine herds of horses that were prized by other tribes and settlers alike.

During his expedition in 1806, Meriwether Lewis described the horses of the Nez Perce as “lofty, eligantly [sic] formed, active and durable.”

Nez Perce horses became widely known for their intelligence, ruggedness and dependability. Settlers riding the horses called them Palouse Horses, which is most likely a reference to the Palouse River or perhaps to the Palouse Tribe itself.

The museum’s been called a hidden gem because people assume the only attraction is the horse. She said the museum showcases not only the history of the spotted horse but the history of the Palouse region and tribes like the Nez Perce.

Thanks to the efforts of the Nez Perce, Appaloosas were abundant until wars between the U.S. Army and native tribes swept across North America during the late 1800s. Both the Nez Perce War in 1877 and Coeur d’Alene War in 1858, in which the Palouse tribe was allied with the Coeur d’Alene, ended disastrously for native warriors. The U.S. Army knew that to cripple the tribes, it must deprive them of their horses, and that is exactly what they did.

Rounding up and slaughtering thousands of horses forced the tribes to surrender, and nearly led to the extinction of the Appaloosa. To remember the events and story of 1877, the ApHC holds the annual Chief Joseph Trail Ride.

Thankfully, this was not the end of the trail for the breed. The 1900s brought a surge in Appaloosa presence, especially at horse shows and in those good ol’ Western movies. Increased attention led to the founding of the ApHC in 1938, which recognized the breed and replenished the dwindling gene pool by crossbreeding with Thoroughbreds, American Quarter Horses and Arabians. This infusion of new genes stabilized bloodlines and saved the breed.

In honor of its Palouse heritage, the Appaloosa was declared the state horse of Idaho in 1975 and featured on a special Idaho license plate. You can visit the ApHC and Appaloosa Museum in Moscow, Idaho, only a 12-minute drive from WSU. The museum even has a summer resident Appaloosa, mare Nikki, on loan from the Chief Joseph Foundation.

The Appaloosa is not simply a horse breed: it is a glimpse of ancient horses and an enduring symbol of the wild history of the Palouse.