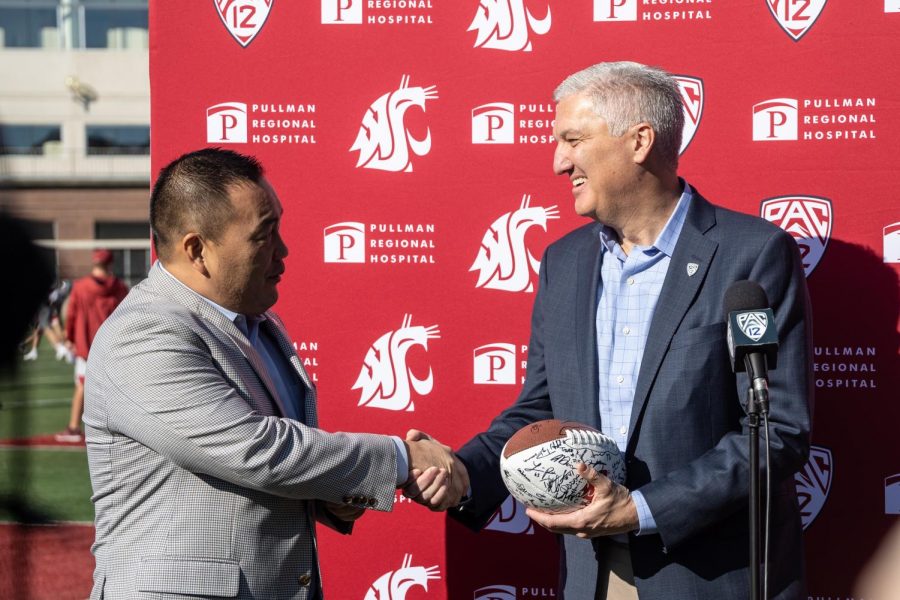 A new age of college football has dawned upon us, with Oklahoma and Texas being the catalysts and leaving the Big 12 conference to join the SEC.

Even though both teams will not be eligible to join the conference until July 1, 2025, a ripple effect has been sent throughout the college football world.

The biggest effect is the creation of the alliance between the Pac-12, ACC and Big Ten, which all three conference commissioners formally announced in a press conference Aug. 24.

With that, the Pac-12 has also been linked to expanding the conference to bring teams from the Big 12 and other conferences, trying to strengthen the conference as a whole.

How does this impact WSU athletics, with potentially more teams entering the conference? What does the alliance mean for college football and the future of recruiting?

Here’s why the future of the Pac-12 will change forever. The idea of expansion for the conference is already revolutionary.

First off, the idea of an alliance between three of the Power 5 conferences is confusing because these three conferences are competing with each other. They now have to form some unified effort to support athletes’ mental and physical health, promoting diversity and everything else to encourage a better NCAA.

I completely understand that aspect of the alliance; the NCAA having more of an accepting and diverse look is the ultimate goal.

But what does this mean for scheduling games in the future for the Pac-12?

Well, nothing will happen this immediate season for football and men’s and women’s basketball. But in the immediate future, there will be scheduling decisions between the three conferences to try and strengthen their resumes for the postseason.

So, the Pac-12, ACC and Big Ten all just want to compete with the SEC, which dominates at almost all three of those sports? Sounds about right.

Since the beginning of the College Football Playoff, the SEC has made eight appearances in the seven-year history of the playoff system.

The Pac-12 has only two appearances, The Big Ten has five and the ACC has eight, but technically seven because Notre Dame only joined the ACC last year.

Although it may seem as if the ACC is dominant with all their appearances, six out of seven of those appearances are from Clemson every year after 2015 and the rest of the conference is not good anymore.

What about college basketball?

The ACC is the usual thoroughbred, with Duke and UNC being two of the best in the nation historically, but the conference runs very deep with Virginia, Louisville, Florida State, Syracuse and more teams with plenty of success.

So why make an alliance? To beat the SEC.

Back to expansion, imagine the Pac-12 potentially becoming the Pac-14? 16? Maybe even bringing more and more teams from Group of Five conferences.

As of now, Pac-12 Commissioner George Kliavkoff and the Pac-12 have chosen not to pursue expansion at this time, said in a press release from the Pac-12 last Thursday.

But that does not mean the other conferences are not looking into expanding. The Big 12, who has now lost their two biggest and best contributors for football, have to scramble to find some kind of replacement.

A school that has been mentioned in the search? BYU.

So how does it affect WSU?

The Cougars may or may not have to play teams like Kansas, Kansas State, Baylor and Texas Tech as conference opponents for football or basketball.

WSU will have to schedule around playing within other conferences for the future, but this puts the WSU-Wisconsin series slated to start next year in serious jeopardy.

The Pac-12 could turn into the Pac-20 plus, and the already established interconference rivalries will seem to disappear and be shadowed by a regular season consisting of many teams.

But do not worry, we can still face Alabama. If we want them again.