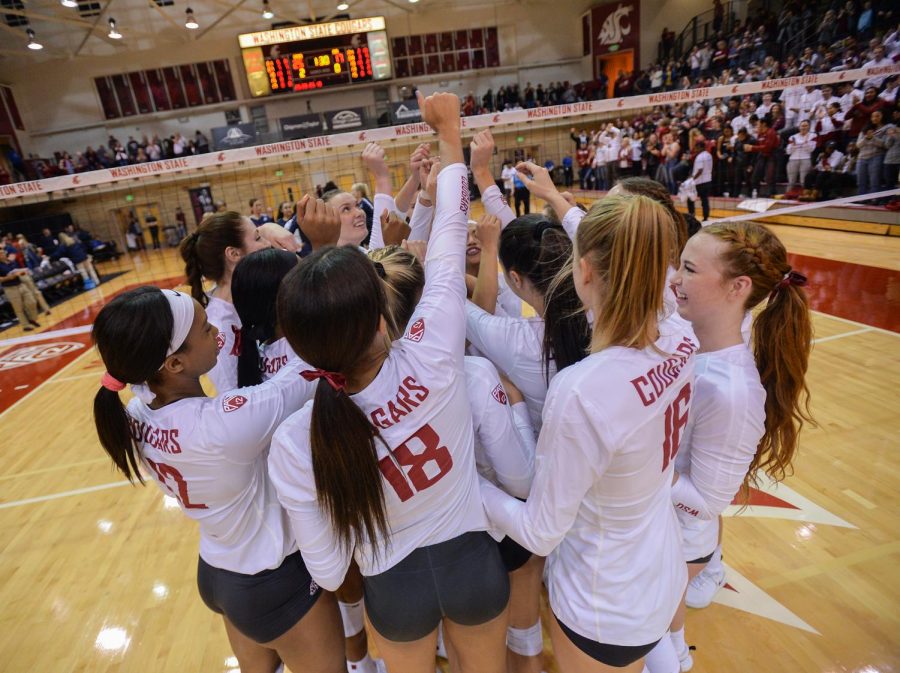 The Cougar volleyball team celebrates a 3-0 straight set win against Arizona on Oct. 18, 2019, in Bohler Gym.

This week, the Coug women are traveling to Las Vegas to take on No. 8 Purdue and UNLV in the Rebel Classic. After two tough losses at the Carolina Volleyball Classic against two great teams, the women are looking to take the court once more.

In the last two matches, the Cougars recorded 117 kills. In the match against South Carolina, fifth-year outside hitter Penny Tusa had 22 kills, while junior outside hitter Pia Timmer had 10.

WSU is still a very young team still with only one fifth-year who is graduating this year. The rest are all juniors and below.

Purdue has been a powerhouse in the world of collegiate volleyball. The Boilermakers have won both of their matches this season. Purdue played the Kansas Jayhawks and swept them 3-0. Purdue also beat Loyola Marymount in four sets.

The Boilermakers had four players with a hitting average above .400 in their match against Loyola Marymount. Hayley Bush, an American Volleyball Coaches Association All-American honorable mention recorded 41 assists and adding right digs.

In the match, the women recorded 50 kills total with an overall hitting team average of .339.

UNLV freshman Chloe Thomas was named Mountain West’s freshman of the week for her performance in the match against Southern Utah.

Thomas had an attacking percent of .435 and had 9 block assists in the Rebels’ last match against Southern Utah.

The Rebels are currently 2-1 on the season with one loss to No. 15 BYU.

In their season opener against BYU, the Rebels recorded 26 kills, three aces and 26 digs.

In UNLV’s second match against Southern Utah, the Rebels recorded 44 kills and five aces, as well as 46 digs. UNLV won 3-0 to take their first win for the season.

UNLV also played Long Island and won 3-0. The Rebels recorded 43 kills in this match as well as six aces, 10 blocks, 40 assists and 39 digs.

WSU has some important matches coming up and has a fun schedule ahead of them. The season is still young, but the work has just begun. The women are currently ranked No. 25 in the ACVA coaches’ poll.

The Cougs take on Purdue at 4 p.m. Friday and on UNLV at 4 p.m. Saturday. Both matches can be viewed through the UNLV website.