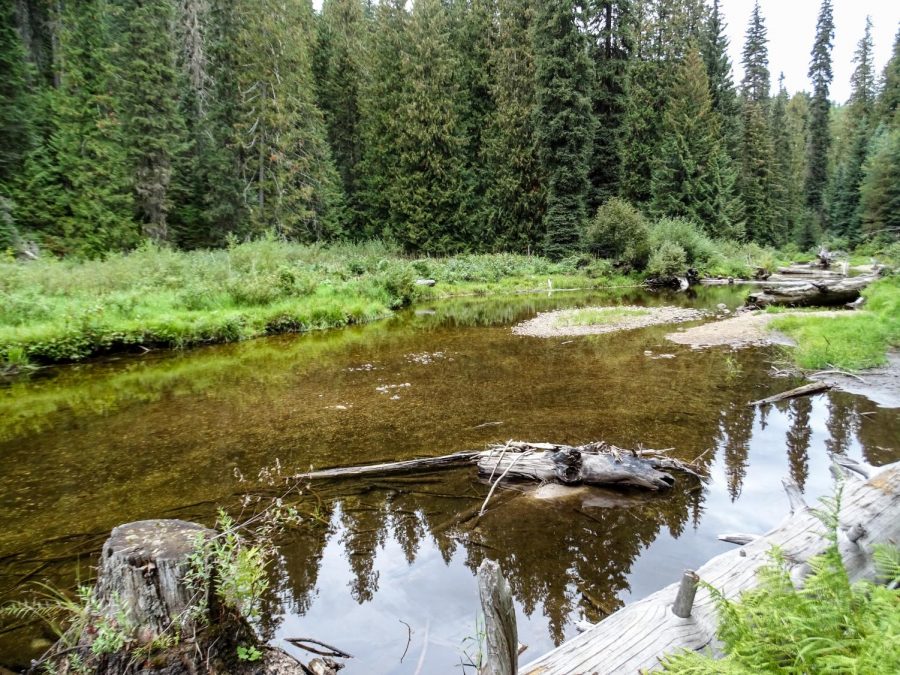 COURTESY OF FRIENDS OF THE CLEARWATER

Steelhead and other fish bring nutrients to North Central Idaho, a relatively nutrient-poor area. These fish feed a lot of species aside from humans, acting as a key part of the ecological system.

“The habitat for aquatic species has been diminished by all this logging,” he said, “as has the habitat for terrestrial species that need older forests.”

This particular case was directed at protecting the habitat for spawning steelhead. Steelhead spend the first several months of their lives in this area before migrating to the ocean, Macfarlane said.

A steelhead is a seagoing rainbow trout; the species’ population has drastically declined over the years. Macfarlane said the new roads and subsequent maintenance from logging negatively affect the fish’s habitat.

“Some of these roads are right along streams, which put sediment into the stream, which are bad for spawning fish,” he said. “The young eggs are buried and they die.”

Friends of the Clearwater and Alliance for the Wild Rockies filed an intent to sue the U.S. Forest Service and National Marine Fisheries Service under the Endangered Species Act on April 7, 2020, he said.

Mike Garrity, Alliance for the Wild Rockies executive director, said he would have been surprised if the two groups lost.

The logging project may still go through if the Forest and Fisheries services make some changes to their proposal, Macfarlane said.

“They have to come back to the judge, with a new sort of a new biological opinion,” he said, “and take into account the very dire straits of the steelhead.”

As of now, he said there is no timeline for an appeal.

The area is an important watershed for the recovery of threatened steelhead, Macfarlane said. Chinook salmon, bull trout and westslope cutthroat trout are similarly affected by logging.

Chinook salmon and bull trout are both listed under the Endangered Species Act. Additionally, the hydro system and competing hatcheries pose a threat to the habitat, Macfarlane said.

Steelhead and other fish bring nutrients to North Central Idaho, a relatively nutrient-poor area. These fish feed a lot of species aside from humans, acting as a key part of the ecological system, he said.

In fact, Macfarlane said these fish likely made the forests what they are today.

“Part of the reason we think the trees grew so big here, besides being a little bit wetter than the rest of the Rockies, is that they had these large runs of salmon steelhead,” he said. “But no more.”

Although there have been several other lawsuits examining similar habitats, Macfarlane said this particular case is unique because the court looked at cumulative effects of the logging project and directly linked the issue with the Endangered Species Act and steelhead populations.

Garrity is often involved with similar environmental cases. He said the cases focus on protecting the habitat for native species in the Northern Rockies, including salmon, grizzly bears, great gray owls and northern goshawks.

Macfarlane said he hopes the Forest Service reevaluates its timber program and number of sales in the Nez Perce-Clearwater National Forests.

He said the Nez Perce Tribe spent a lot of money trying to recover the watersheds in the Lolo Creek Drainage and is concerned timber sales would undo some of that work.

Maintaining steelhead populations in Lolo Creek and other areas of Central Idaho is important for the species’ long-term survival and the role they play bringing nutrients to headwaters, Macfarlane said.

“We’re going to lose what it means to be the Northwest if we allow these fish to go extinct and if we allow increasing development of our public lands,” he said.