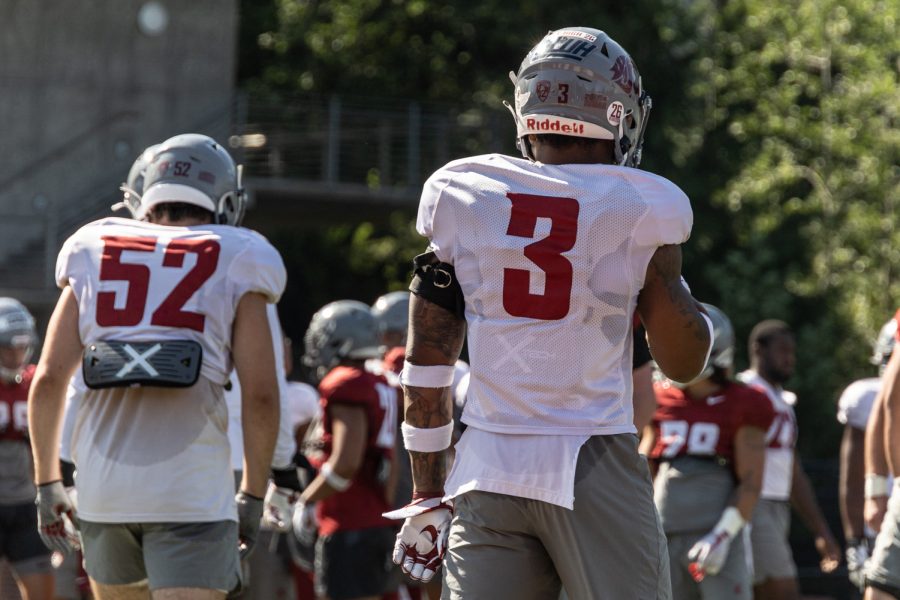 Redshirt sophomore linebacker Kyle Thornton and fifth-year cornerback Daniel Isom take reps during an Aug. 16 practice on Rogers Field in Pullman. Isom is set to start at strong safety, while Thornton will back up fifth-year senior Jahad Woods to open the 2021 season.

This is the fourth time these two programs have ever met, with the most recent coming way back in 1961 when the Aggies took a 34-14 win in Spokane. The Cougars won the other two meetings in 1949 and 1950.

Utah State enter this game coming off a 1-5 2020 season. However, this is not the same team that the Aggies fielded in 2021.

WSU’s opponents have an all-new coaching staff, as well as many new faces between the lines. The Aggies brought 15 transfer players to the program in the offseason.

Head coach Blake Anderson will make his Utah State debut following seven seasons as the head man for the Arkansas State Red Wolves. Anderson racked up a record of 51-37 during his time in Jonesboro, Arkansas.

“It’s time to play now,” Anderson said. “You put all that other stuff aside and just focus on the task at hand.”

Among those transfers coming in is Anderson’s quarterback from his latest season at Arkansas State, junior Logan Bonner. Just like with Jayden de Laura and Jarrett Guarantano, Bonner is squaring off with Utah State’s starter from last season, junior Andrew Peasley. Like the WSU quarterback battle, this one has not been resolved as we approach the regular-season opener.

“Well, I can say,” Anderson said when asked about his plans for the quarterback situation in the opener. “I’m not gonna say. How about that?”

Anderson also said there is a “very real chance that both play,” but this decision is much bigger than just the opener. They want to make sure they have the right guy for the season.

Bonner is not the only Red Wolf to have followed Anderson. Graduate transfer Justin Rice was considered among the best Group of Five linebackers in the nation. Rice was a semi-finalist for the Bednarik Award for the best defensive player in the country.

Utah State and Anderson also were able to pull players from some big-name programs around the nation, including a pair of defensive ends from Texas and Miami, an offensive lineman from TCU and Calvin Tyler Jr., a running back from Oregon State.

On the other side of the field, WSU is bringing back some impact players from the last couple of seasons, while also bringing in a handful of new contributors including transfer quarterback Guarantano and transfer running back Nakia Watson.

One player the Aggies will have to keep an eye on will be fifth-year linebacker Jahad Woods.

“He is just one of those guys, very similar to Justin Rice, who just has a nose for the ball,” Anderson said. “He seems to end up in the right place, plays with a super high motor. He has so many snaps under his belt. He’s sort of seen it all and done it all.”

Anderson has good reason to keep his eyes on Woods. He enters this season as a preseason All-Pac-12 honorable mention. Woods will likely be the backbone of a really solid defensive unit. In fact, this defense will probably be the stronger side of the ball for WSU this season.

That says a lot considering the talent on the offensive side of the ball. WSU returns a talented offensive line that includes Liam Ryan, Brian Greene and Abraham Lucas.

Behind them will be either Guarantano or de Laura. At this point, whichever player wins that battle should be able to lead this team.

On Wednesday, WSU Head Coach Nick Rolovich said the two quarterbacks had “made it tougher” this week in terms of deciding who would be starting week one.

Joining the quarterback will be a stable of incredible running backs, led by senior Max Borghi. Borghi is joined by graduate student Deon McIntosh and Watson.

Out wide, redshirt sophomore Donovan Ollie, redshirt senior Calvin Jackson Jr., redshirt senior Travell Harris and freshman De’Zhaun Stribling will get the start as the four primary receivers. All four players can make an impact in the passing game that Rolovich will rely heavily upon.

Despite all this talent returning for the Cougs, Utah State has not been focused on what happened last season for the Cougars.

“You’re gonna think I’m crazy,” Anderson said. “I have not spent a whole lot of time worrying about Washington State. I’m worried about us at this point. I want to make sure we have our best team ready to go.”

With a lot of turnover, Rolovich said he was doing something similar, focusing on tape from Arkansas State rather than Utah State to get a feel for Anderson’s system.

“It lended itself to us studying a lot of people,” Rolovich said. “There’s some Ark State defense, definitely Ark State offense, and kind of looked at some of the other film where the other guys came from.“

Rolovich said he will spend much of Friday evening with the TV off and looking over call sheets while trying to envision situations that could come up throughout the game. However, there is one other way Rolovich will get ready for the game on Friday night that WSU fans can join in on.

“I take a shower with the lights off before I go to sleep,” Rolovich said.

WSU will kick off 2021 under the lights with the second latest kickoff time in FBS for Saturday night. The Cougs will get things going at 8 p.m. Saturday in Martin Stadium. The game will be live on the Pac-12 Network.