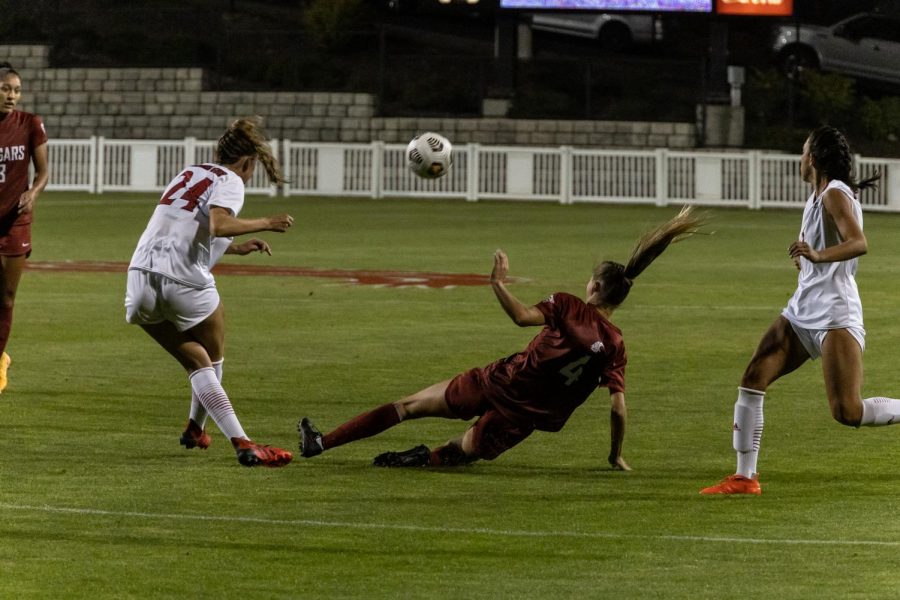 WSU soccer is headed to their first away game of the season to play against the San Diego State Aztecs at 7 p.m today in San Diego. After that, the Cougars return to Pullman to play Hawaii at 1 p.m. Sunday at the Lower Soccer Field.

In the last game, WSU beat Eastern Washington 4-0 at home, which continued a two-game undefeated streak for the Cougars. WSU sophomore Alyssa Gray led the Cougars in scoring with two goals that night.

“It was a good start to the weekend last weekend to win that game Saturday night against Eastern,” sad Head Coach Todd Shulenberger.

The last time the Cougars played San Diego State in the regular season was before the majority of the team was born, all the way back in 1996. More recently, WSU played an exhibition game against the Aztecs in 2019 where they took home a 5-0 win. The Cougars have a 2-1 record against San Diego State.

In that game, fifth-year Elyse Bennett and junior MacKenzie Frimpong-Ellertson each netted one goal for the win and 12 Cougars from that game have returned to play on the current 2021 roster.

Currently, the Aztecs have a 1-3 record with their most recent game a 6-0 loss to No. 13 Stanford. Their only win of the season was against Army where they managed a 1-0 win in their first game of the season.

This season, Hawaii has played two exhibition games against Tusculum and Hawaii Pacific University, winning both games 1-0. WSU has a 6-0 winning record against Hawaii. The two most recently faced off in 2019 where the Cougars won 1-0.

The current team has a lot of depth in both veteran and younger players. Gray’s two goals in the Eastern game were assisted by sophomores Margie Detrizio and Marin Whieldon. Another sophomore, Jayla Land, earned her first career goal in the game.

Meanwhile, Bennett finished off the night against Eastern with a goal. The Cougars also return other experienced players like fifth-year goalkeeper Marissa Zucchetto and fifth-year Sydney Pulver.

Pulver moved into a tie for eighth all-time for games played for the Cougars having been involved in 79 total contests. The all-time record is 86 games.

“We got options,” Shulenberger said. “Whether it’s our veterans or our young one, I think we’re a scary team when we get moving.”

The Cougars were ranked fifth by the Pac-12 in the preseason poll, which marks their third-straight year picked in the top half of the conference.