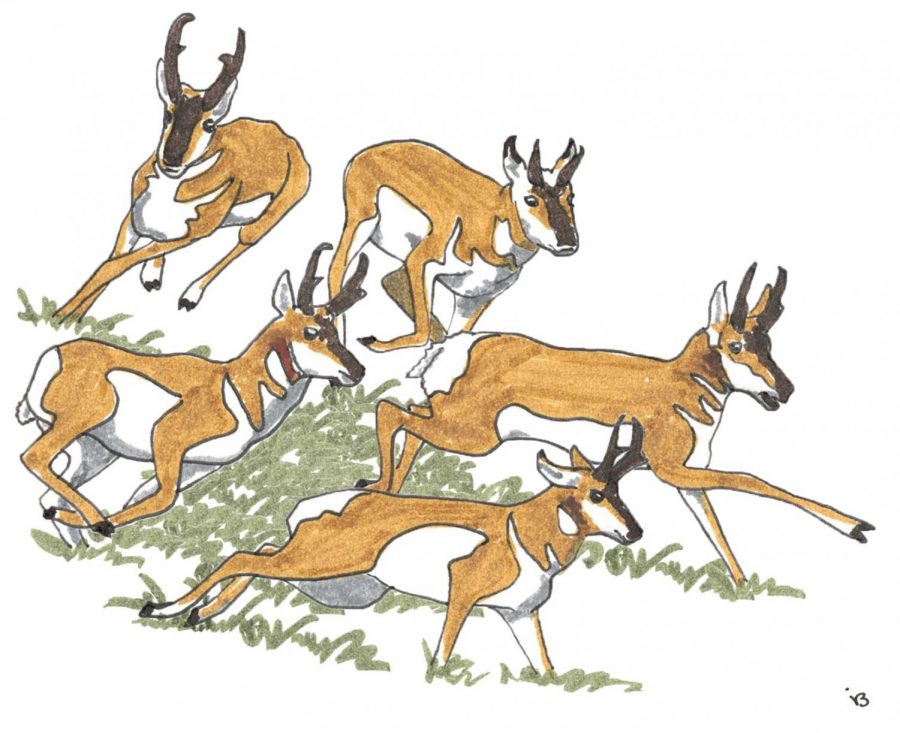 Pronghorn Antelopes conceive seven children, but only one is born.

As you travel through the shrubby grasslands of Washington state, be on the lookout. You just might catch a glimpse of the fastest mammal in the western hemisphere: the pronghorn antelope, Antilocapra americana.

Pronghorn can sprint at a blinding 60 mph. Their abilities are second only to thatof the African cheetah. Why can they run so fast if their main predator, the coyote, only reaches 40 mph? Coyotes were not always the pronghorn’s biggest threat.

About 30,000 years ago, when they first appeared on the plains, pronghorn were prey of the American cheetah. To outrun these speedy cats, pronghorn evolved a larger trachea, larger lungs and higher blood hemoglobin levels, which increased their oxygen intake and absorption.

As the Ice Age set in, the American cheetah vanished and wolves became the pronghorn’s main predator. Pronghorns’ elephant-sized eyes are the biggest eyes of any ungulate and can detect movement up to 4 miles away. Excellent eyesight was key to evading wolves.

Even if wolves did surprise an antelope, they couldn’t hang on; pronghorn fur pulls away from the hide easily. It’s hollow too, which makes it a superior insulator. Their enlarged nasal cavity enables them to survive frigid temperatures by warming cold air before it reaches the lungs. Despite new predators and climate change, pronghorn persisted, providing a glimpse into how a species can survive a mass extinction.

Few species survived the Ice Age. Forests became vast plains, and innumerable species including the Dwarf pronghorn died out. Pronghorn antelope are the only living members of their taxonomic family Antilocapridae, which translates to Antelope-goat.

Their closest living relatives are giraffes and okapis. Turns out, they’re not actually antelope, or goats. The scientists who classified them noticed their similarities to both groups and named them based on appearance.

Pronghorn technically don’t have horns either. True horns grow a new ring each year and have one point. Instead, both male and female antelope sport pronged horns that shed an outer sheath each year, not the entire horn, to allow for new growth. No other species has pronged horns.

They’re also unique when it comes to reproduction. Pronghorn females, or does, typically birth twin fawns each year. Disturbingly, though, they may begin their pregnancy with as many as seven embryos.

As the embryos develop, they produce spear-like growths that puncture other embryos competing for space in the womb. By the time the embryos implant on the uterine wall, only the strongest two remain.

Although Washington state boasts plenty of ideal habitat, native pronghorn have been absent since the 1800s. Several reintroduction attempts in the 1900s failed.

Pronghorn migrate hundreds of miles, so barriers like highways and fences are a big problem. They’re not adept jumpers, and instead try to go under or through fences, often getting tangled and cornered by predators.

Removal of unnecessary fences, replacement of barbed-wire with other types of fences and maintenance of wildlife corridors provided a much higher chance of success.

In 2011, the Yakama Nation released 99 transplant pronghorn from Nevada onto their reservation lands. The Colville joined the effort in 2016, releasing 150 over the next two years.

Thanks to efforts of the Washington Department of Fish and Wildlife and various tribes, pronghorn numbers continue to increase, and so far the reintroductions are a success. Keep an eye out for these prairie racers!