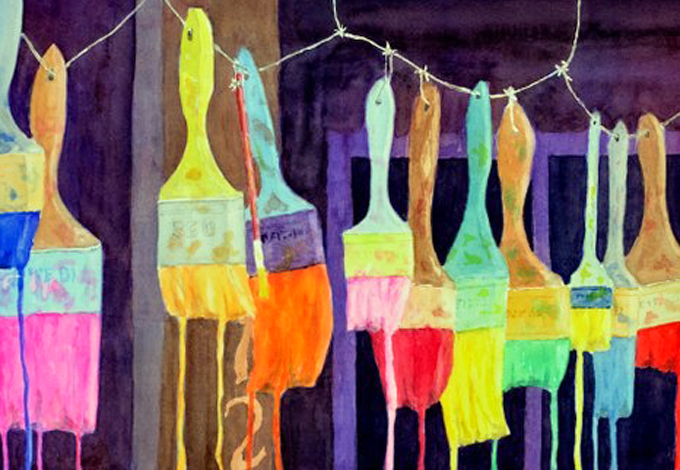 Artist aims to create works that are not only fun to paint, but are attractive to viewers.

Ladybugs and keys are unusual details featured in the watercolor paintings of artist Ernie Weiss’ current exhibit at the Libey Gallery in Colfax.

Weiss’ career was in architecture. He always wanted to paint but never had a chance. After retiring in 2005, he picked up water coloring.

His current exhibit focuses on portrayals of water and features a variety of techniques for painting.

“I don’t necessarily always do one type of painting,” Weiss said. “I’ll do some still lifes, and some plein air [nature scenes] and so forth, but I try to do a series and these are more related to water.”

Weiss said he grew up on an apple orchard in the Naches Heights, and it was there that his love for nature was born. He and his two brothers were always outside exploring.

For this series, he went to the ocean and large aquariums searching for inspiration. Weiss said he is very interested in aquatic animals and has to stop and take pictures every time he passes a Koi pond.

“I decide that I want to paint an object, so I look around the house and it just kind of hits me – that that’s gonna be a painting,” Weiss said.

Weiss said he draws inspiration from all around him, whether it be a “monster” bowl of ice cream or a sink faucet. In many of his still life paintings, he also likes to include small details or out-of-place objects, like a ladybug or keys.

“The inclusion was to put something there that’s not usually there,” Weiss said. “It’s fun, and it’s kind of a little signature for the series of paintings.”

Fun is a continuous theme throughout Weiss’ art and his feelings toward painting.

“[Painting] is just a lot of fun. You can sit down and think and involve yourself in the painting and not worry about anything else,” Weiss said.

The biggest challenge from there is completing it in the way that you think is attractive but will also be enjoyable for everyone to watch or look at, Weiss said.

All one has to do is look at Weiss’ painting to see that color is very important to him. While the medium did not typically allow for a lot of brightness in the past, now the paints are so vivid he can put on enough coats to create bright colors.

When painting multiple coats, like Weiss does, it is important to think ahead to preserve the whites and light colors. If you start painting too dark, you will not have any white.

This planning is essential as it took him about 20 to 30 hours to complete the paintings in his current series.

It is his eye-catching use of color that draws people into his work.

“I found Ernie because he was on display at another location and I really enjoyed his work, so I looked him up and reached out to him directly,” said Kylie Fullmer, Whitman County Library director.

The gallery has artists who visit, asking if they have an opening. When artists know who is on display, they can recommend someone they should show next.

The various artists featured in Libey Gallery, like Weiss, draw people to Colfax.

“[The gallery] ties into this creative downtown district that we’re trying to create,” Fullmer said.

Colfax is becoming a destination for people to come and enjoy art, Fullmer said.

More of Weiss’ work can be seen on the Palouse Watercolor Socius website, which he is a board member of.