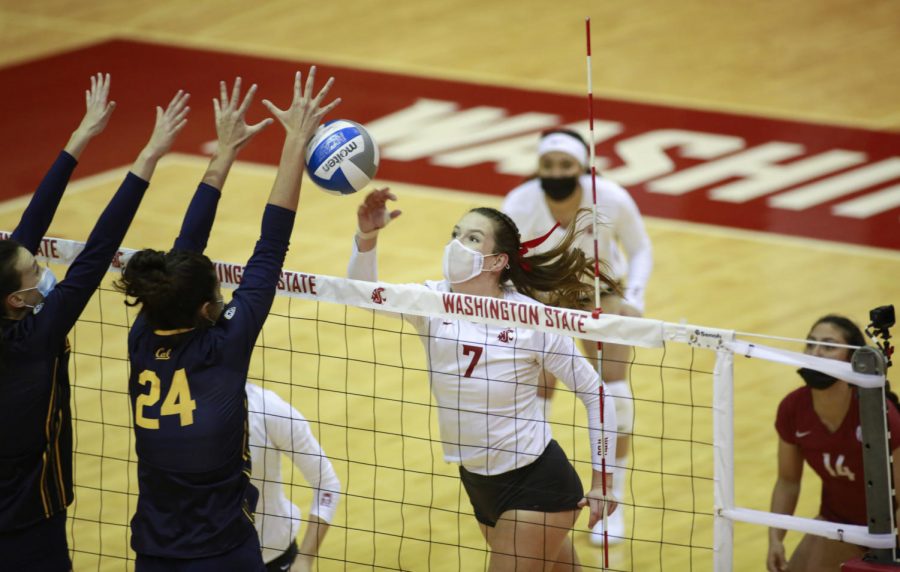 Then-sophomore outside hitter Pia Timmer rises up over net to spike ball.

The Cougs are coming home to Bohler Gym for the first time this season and will enter with a 0-4 record.

After two tournaments on the road and no matches won, the Cougs are hosting the Cougar Challenge as a part of their non-conference play.

In their last four matches, the Cougs struggled to find their offense and defense. With their first matches back in Bohler Gym, the Cougs are also looking to get their defensive and offensive groove back.

The usual big names for WSU, such as junior outside hitters Magda Jehlarova and Pia Timmer, have not had as many big plays as usual. WSU is currently home to some of the best volleyball players in the Pac-12. Jehlarova won defensive player of the week twice last season. Redshirt junior setter Hannah Pukis was also named American Volleyball Coaches Association All-American.

Gonzaga on the other hand is 3-3 on the season. The Bulldogs played Southeastern Louisiana and won 3-2. In this same tournament, the Zags played Mississippi State twice and lost both times 0-3 to finish 1-2 in the tournament. In the Gonzaga Invitational, the Zags played Seattle, Air Force and Oklahoma, going 2-1. Their only loss in their tournament was a three-set loss to Oklahoma.

The Cougs have three chances this weekend to improve their record and overall game before conference play starts.

You can watch the Cougs play in their first tournament in Pullman since 2019 on the WSU Athletics website.