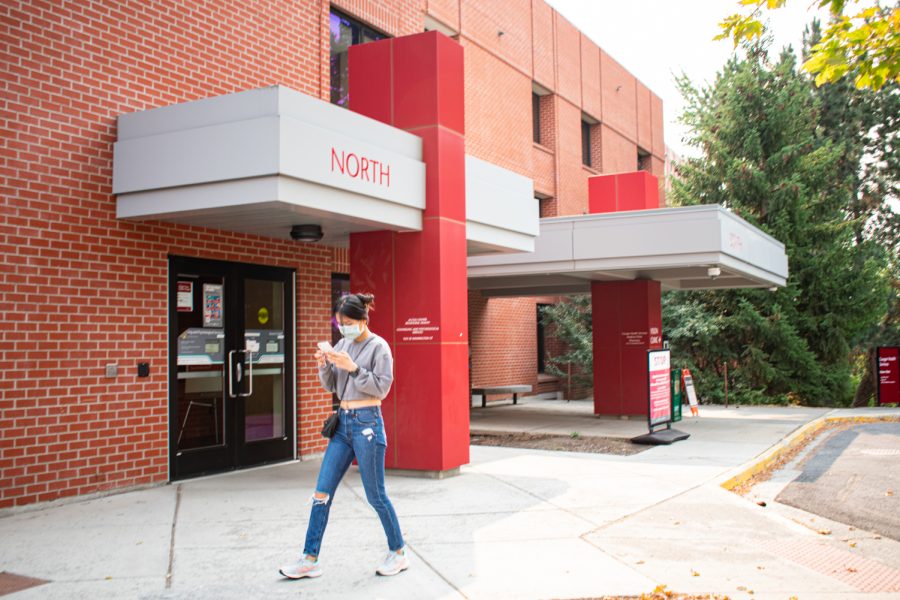 A student walks past the Cougar Health Services' psychological department on the south side of campus.

Counseling and Psychological Services at Cougar Health Services received a higher number of appointments during the first week of school this year than last year, said CAPS Director Jennifer Ellsworth.

Students were seeking help in their hometowns because of COVID-19, Ellsworth said.

“It was quieter last year in terms of the number of students checking with us, but that allowed us to provide more therapy to the students who did come in,” she said.

Pre-pandemic, CAPS was always busy during the beginning of the school year, Ellsworth said. However, because of the pandemic, last year was quieter than normal.

“We are finding that students who come seek services here are definitely impacted by the pandemic,” she said. “They’re navigating anxieties or losses or difficult experiences related to the pandemic, so that’s a theme that’s showing up.”

Ellsworth said CAPS has been able to get back to its regular level of appointments with students since the beginning of the school year.

CAPS opens up more time slots for students in need of appointments at the beginning of the school year, she said. Once the middle of the semester hits, CAPS tends to get more booked up and often transitions to a waitlist. At that point, it tries to be flexible for someone to have their first appointment.

CAPS keeps that availability open to get a good sense of how intense the student’s need is and prioritize an appointment based on the issues they are dealing with, she said.

“If someone is experiencing a lot of thoughts about suicide and starting to get more serious about that, we want to try to get them in more quickly compared to somebody who’s maybe struggled with anxiety in the past and wants to keep an eye on it,” she said.

An important first step for students going to CAPS is to have an initial consultation appointment, Ellsworth said. It gives students the opportunity to meet with a mental health counselor and describe what problems they are experiencing.

The appointments last about 30 minutes and give the mental health counselor an opportunity to figure out what resources might be best for the student, she said. Those resources could include any of the services CHS has to offer, such as picking up a prescription from the pharmacy.

Ellsworth said the easiest way to make an appointment is to call CHS. Initial appointments are available every day and are offered on a same-day basis.

“We want students to be able to come out on the day it works for them to get an appointment,” she said. “We also have crisis appointments that are available by calling the same day to get those scheduled.”

Sometimes, a mental health counselor will refer a student to services outside of CHS, such as Palouse River Counseling, Ellsworth said.

Mike Berney, Palouse River Counseling executive director, said he did not see a huge difference in appointments when school started; most students get referred to PRC toward the middle and end of semester.

As the semester goes on, 20 to 25 percent of PRC’s service requests are from WSU students who have been referred there, Berney said.

The students who do come into PRC at the beginning of the semester tend to experience anxiety about school starting, he said. This is even more true now because students have been attending classes online for a year and a half and are not used to being in person.

“We have a few people that come to campus with more significant behavioral health needs,” Berney said. “Either they or their parents call trying to arrange for longer-term services.”

Generally speaking, PRC has seen students come in mostly for anxiety, he said. The cause of the anxiety changes throughout the semester, though.

“If they haven’t been doing well in class … finals are coming up, they’re not ready, our crisis services get a little busier more towards the end.”

Because of the pandemic, PRC held its appointments online, he said. As it starts to hold in-person appointments, clients still have the option to attend online.