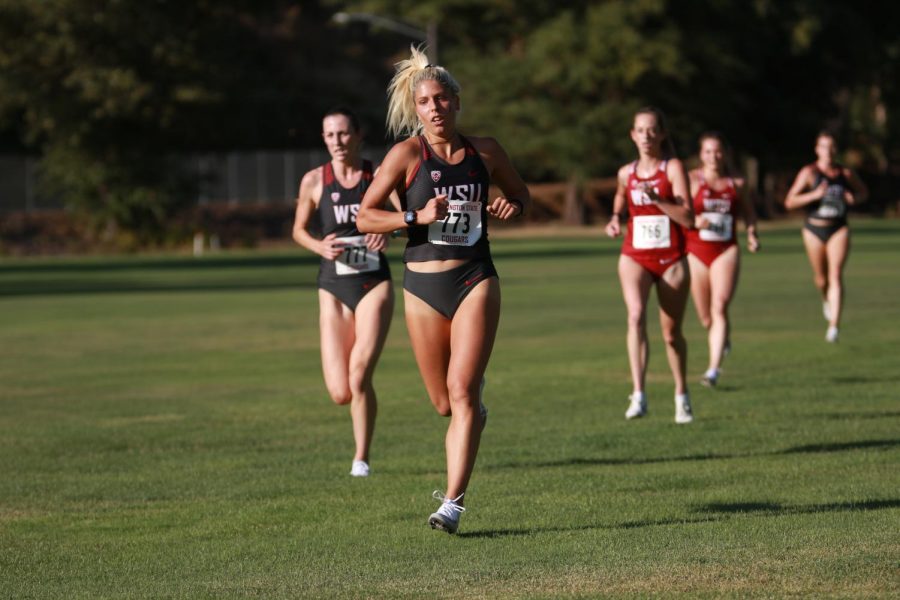 Then-sophomore Zorana Grujic leads the gray team in the first 2,000m of the 2019 WSU XC Open at Colfax Golf Course.

Both the WSU men’s and women’s cross-country teams ran on Friday on the home course for the second time this season.

The WSU women were led by freshman Neema Kimtai, who finished second overall.  Kimtai was the fastest Coug at the race. She leads the women’s team with an average mile of 5:37.2. She also ran a 20:57.4 in the women’s 6k.

Freshman Isaiah Lowery recorded a time of 26:05.1 which placed him in the 40 spot. Sophomore Amrit Banga followed with a time of 26:21.8 and secured the 47th spot. In 50th place was junior Nate Pendleton.

Even in the rain, the Cougs ran well in only their second meet on their home course. With a standout performance from the women and a few good performances by the men, the Cougars get ready to get back out and train before their next invitational.

The Cougs will be competing in the Bill Dellinger Invitational hosted by the Oregon Ducks on Sept. 23.