Waiting to say “I do” 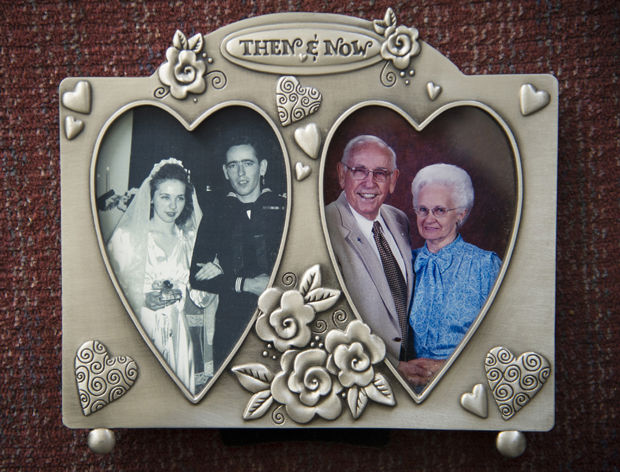 Harold "Tom" and Shirley Tucker in the wedding photo taken in 1945, left, and present day. Harold and Shirley are celebrating their 69th anniversary this month. The couple met at Cook's Roller Rink (now Pattison's) when Shirley was a 17-year-old high school student and Harold a 19-year-old sailor stationed at Farragut.

According to a Pew Research Center (PRC) study last year, the Millennial generation is waiting to say their “I do’s” longer than previous generations.

Only 26 percent of our generation is married. When they were the age that Millennials are now, 36 percent of Generation X, 48 percent of Baby Boomers, and 65 percent of the Silent Generation were married, according to the PRC.

Although the PRC didn’t provide any insight to why younger people are waiting to get married, they touched on two ideas that I know have influenced me: financial stability and a lack of trust in people.

According to the PRC, Millennials are also the first in the modern era to have higher levels of student loan debt, poverty and unemployment, and lower levels of wealth and personal income than their two immediate predecessor generations.

This is a big reason our generation is waiting to get married. We don’t want to plunge further into debt than we already are, especially as we are getting over the recession.

Although financial stability is important outside of marriage as well, it’s a common hot button with married couples. Since I’m a Millennial, I’m trying to apply this study to myself and see if I agree.

Before I get married, I think it’s important that I have a job that can provide me with enough money to support myself comfortably. If I’m going into a serious relationship, it’s important that my partner can support himself, too. I would have to say that this part of the study is correct in my case.

Another point that the PRC brought up was that Millennials do not trust people as much as other generations do.

According to the PRC, just 19 percent of Millennials say most people can be trusted, compared with 31 percent of Gen Xers, 37 percent of Silents and 40 percent of Boomers.

The problem with the question of trusting others is that it’s pretty broad; however, it may correlate with people putting off marriage.

It takes a lot of trust in another person to make the promise to be with them forever, and a lot of younger people are trying to be extra-sure that they found “the one” before they make a commitment like marriage.

Sometimes people rush into a lifetime commitment that they aren’t ready for.

When people talk about “love at first sight” and get married to someone they haven’t even known for a year, it drives me crazy.

There should be absolutely no rush to get married. If you’re theoretically going to be with that person forever, you should get married when you are financially stable, trust each other completely, and have been together long enough that you know you could spend your life together happily.

As far as Millennials waiting to get married, that’s a smart thing to do. Going into marriage with money and trust issues isn’t a recipe for happy couples.