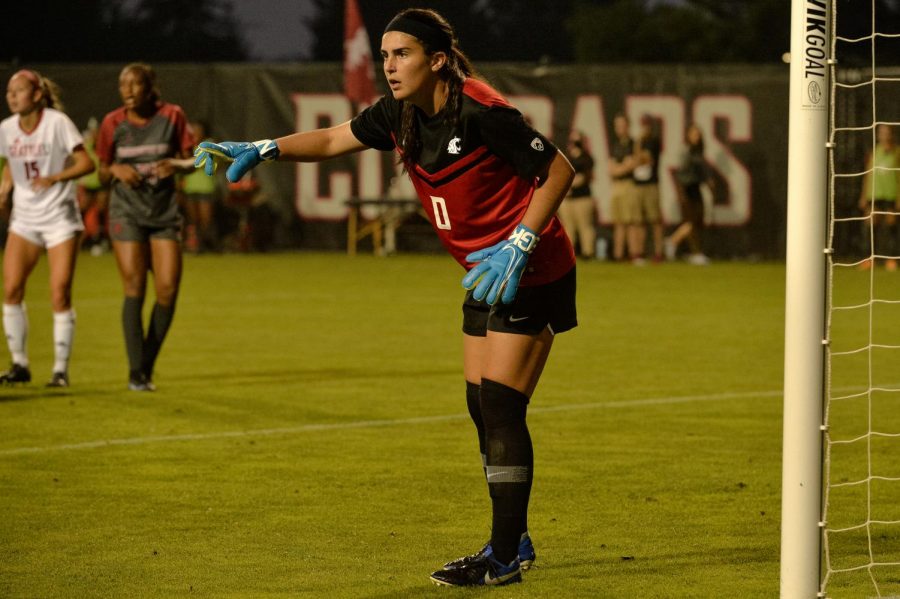 The Cougar starting goaltender grew up in Mississauga, Ontario, Canada. During her childhood, Zucchetto took a liking to soccer and ice hockey, playing both sports up until the age of 14. At that point, she had to choose a single sport to focus on. Thankfully for WSU soccer and Cougar fans, Zucchetto chose to pursue soccer.

Zucchetto’s decision to focus on soccer paid off, and a year later, she became a member of the U-15 Canadian national team. While on the U-15 team, she helped Team Canada win a gold medal in the CONCACAF games hosted in the Cayman Islands.

“Honestly, it helped me transition to college because we were away a lot and on your own,” Zucchetto said.

Being on the Canadian national team, Zucchetto was able to travel to various parts of the world. She said her favorite part of being on the team was the traveling itself and visiting places that you’ve never been to before, including China, Jordan, Grenada and the Cayman Islands.

From an early age, Zucchetto competed with the best in the world, setting her up to continue excelling as a collegiate goaltender.

Zucchetto took her talents to the women’s soccer program at Texas Tech. While at Texas Tech, she cemented her name in the school’s record books and is currently first all-time in goals-against average (GAA), averaging 0.70 per game throughout her time as a Red Raider. Zucchetto is also in the Texas Tech record books for the second-most shutouts in a single season, finishing her sophomore season with a total of 14.

A star on and off the field, Zucchetto has found academic success as well, earning first-team Academic All-Big-12 honors in 2018 and 2019. Zucchetto was having another stellar season in 2019 until a mid-season injury ended her junior year prematurely.

After the 2019 season and her injury, Zucchetto entered the transfer portal, catching the eye of WSU head coach Todd Shulenberger.

“[She is] a veteran goalkeeper with a ton of collegiate and international experience that I helped recruit years ago when I was at Texas Tech,” Shulenberger said. “She will fit in nicely … around a team that now is super competitive in each position across the field.”

Like many athletes, Zucchetto has a set routine for game days. The goalkeeper laughed when asked about her pregame routine.

“I have a lot of superstitions,” she said.

Some of her superstitions include putting her left leg equipment completely on before starting on the right leg and making sure to eat the same snack 30 minutes before every game. Her routine seems to be working for her and might be the key to her impressive goaltending abilities.

Zucchetto has one season as a Coug under her belt, playing all 12 games of the adjusted COVID-19 season last year. In her one year at WSU, Zucchetto has kept up her phenomenal goaltending abilities, recording five shutouts in last year’s short season. Zucchetto also earned Pac-12 Goalkeeper of the week last April, saving a career-best 13 shots against the Washington Huskies in a 0-0 tie.

The pandemic presented Zucchetto and other 2020 seniors with the unique opportunity of extending their collegiate eligibility another year. Zucchetto is using her experience in a leadership role for the Cougars, commanding the backfield from the net.

WSU soccer has been successful over the past couple of seasons, making it to the Final Four in 2019. Now with Zucchetto in goal, another Final Four berth could be in the Cougars’ future this year. Zucchetto agrees, making one of her final season’s goals to “help the team get back to that [Final Four].”

Zucchetto and the Cougars are on the right track, starting the 2021 season 4-1-1.