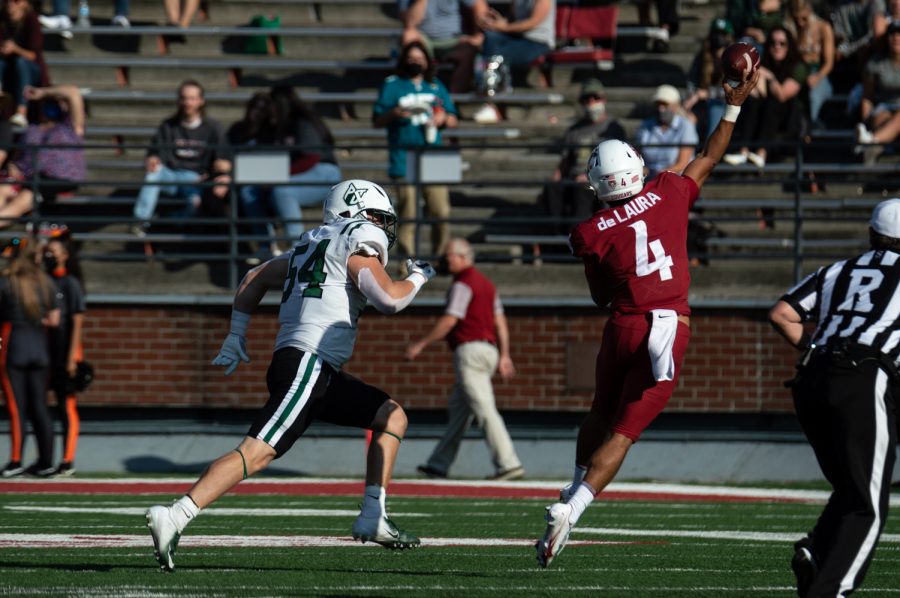 WSU is set to host the USC Trojans for its Pac-12 opener at 12:30 p.m. Saturday in Martin Stadium.

Both teams come into the game 1-1 with WSU losing the season opener against Utah State and USC falling short last weekend against Stanford.

WSU is coming off a win last weekend against Portland State, winning 44-24. The Cougs relied on running backs Max Borghi and Deon McIntosh to move the ball into the endzone. The two backs combined for the majority of WSU rushing yards and one touchdown each. Borghi’s touchdown in the game made him fourth all-time for rushing touchdowns in WSU history.

Jayden de Laura had his first start of the 2021 season against PSU, completing 21 of his 29 pass attempts for a total of 303 passing yards. De Laura also showcased his dual-threat ability, diving into the endzone for a touchdown in the second quarter.

USC comes to Pullman looking for redemption after an upset loss against Stanford. The Trojans lost 42-28 in that home matchup.

USC’s Kedon Slovis had a solid performance in the home game, throwing for 223 yards with one touchdown and one interception. USC’s run game was led by Vavae Malepeai. Malepeai rushed for a total of 94 yards on 15 attempts for a total of 6.3 yards per carry.

Facing Slovis and Malepeai, the Cougs secondary will need to show up against the run and pass alike. The long ball has been an issue for the Cougar defensive backfield and with Slovis coming to town, the ball is likely to fly far and fly frequently. WSU defensive back Daniel Isom will be vital to stopping Slovis and the long pass plays.

“Watching him play this year, it seems like he’s playing even faster,” WSU head coach Nick Rolovich said. “It’s probably due to comfort levels in the defense.”

Last week, USC had a costly nine penalties for a total of 111 yards. Penalty trouble might be a recurring theme this weekend for the Trojans, with the Cougar student section causing false start and delay of game penalties for other visiting teams so far this season, particularly Utah State in the opener.

On Monday, USC head coach Clay Helton was fired and replaced by interim head coach Donte William, who has only been with USC since 202o.

Williams’ game plan for Saturday is “to not have the stupid mistakes and play more together as a family, as a team.”

The news about Helton came as Rolovich gave a press conference on Monday.

“Wow. Wow. It’s definitely a crazy business we’re in, especially as of late. [He] did some great things for that place. I know he cares about the kids … I wish him the best in the next part of his journey,” Rolovich said during the conference.

The Cougars will have to contain the explosive USC offense early to ensure that history does not repeat itself this time in Martin Stadium.

The Trojans come into Saturday’s matchup as the favorites to win with ESPN’s Football Power Index giving USC a 70.7 percent chance of victory over the Cougs. A win for the Cougars would be the redemption Rolovich has been looking for since he took flak for the first week’s loss against Utah State.